A Top Romanesque and Gothic Church with Cloisters, Switzerland

The Basler Münster (Minster) is the top historical sight in Basel, Switzerland. It is a big Romanesque and Gothic church with cloisters and the tomb of the humanist Erasmus. 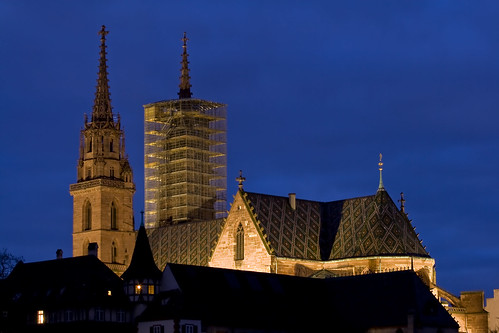 The Basler Münster (Minster) towers over the Rhine Valley and the old town of Basel from Münsterberg hill. This mostly fourteenth and fifteenth-century Gothic church is the top historical and architectural sight in Basel, Switzerland’s fourth largest city.

Romanesque Origins and Elements in the Basel Minster

Most of the present Basler Münster is Gothic but arguably the most impressive single feature of the Basel Minster is the highly decorative Romanesque St Gallen portal (Galluspforte). On the tympanum, dating from around 1180, is a relief of Christ sitting in judgment. The Galluspforte also has reliefs of the wise and foolish virgins from the parable described in the New Testament (Matthews 25:1-13), a very popular theme used in many churches in the region.

The eastern end of the  Basel Minster has further Romanesque elements, although it is easy to get distracted by the views from the large terrace of the Rhine River Valley. On a clear day, it is possible to see all the way to the German Black Forest and French Vosges mountains in Alsace.

The Gothic Western Façade of the Basler Münster

The western façade with twin towers are clearly newer and in the Gothic style. Several statues and decorative elements are used here but St George slaying a rather small dragon with an impossibly long lance is particularly entertaining.

The foolish virgins’ theme from the Romanesque Galluspforte is repeated here in the Gothic. Note the tempter and a maiden – she is revealing too much flesh while snakes and toads – medieval signs of evil – can be seen on the tempter’s back.

The Basler Münster’s twin towers are from the 15th century. The Georgenturm (George Tower) to the north is at 65 m, 3 m higher than the Martinsturm (Martin Tower) to the south. Fantastic views of the church roof, the old town, and the Rhine Valley can be enjoyed from the top of the tower.

The Tomb of Erasmus in the Basler Münster

The Basel Minster has numerous art works including original low reliefs but the most popular sight is the grave of humanist Erasmus of Rotterdam. Erasmus lived for several years in Basel and died here in 1536. By then, the Reformation has been accepted in Basel and the Minster the main church of the Protestant. Although Erasmus stayed a Roman Catholic he was buried in the Protestant church.

Basel’s old town, including a magnificent Rathaus, some of the best museums in Switzerland, and the historic Spalenberg area with cafés and shops, are also worth exploring.