The Romanesque-Gothic Minster, historical Rathaus on Marktplatz, old streets in Spalenberg, fountains, and excellent museums are the best sights to see in Basel, Switzerland. 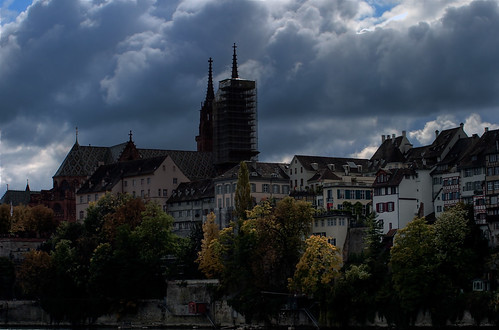 The Swiss city Basel is on the Rhine River at the border with Germany and France. This city of almost 170,000 inhabitants has an interesting historical center, pedestrian shopping streets, and excellent museums.

The Romanesque-Gothic Basler Münster (Basel Minster) is the top historical and architectural sight to see in Basel. This large church on Münsterberg Hill towers of the town and the Rhine River valley. Its origins are twelfth-century Romanesque but most of what is visible today is late medieval Gothic.

The Minster in Basel is famous for its highly decorative Romanesque St. Gallen portal where Christ sits in judgment on the tympanum. Also note the elephants carved out of stone facing the Rhine river.

Basel’s historical Rathaus is on the busy Marktplatz (market square) in the center of the old town. The reddish building was built during the early 16th century but restored and enlarged around 1900.

Frescoes, mostly with justice as theme, were painted in 1610 by Hans Bock. The large statue is of the Roman Munatius Plancus, the legendary Roman who is said to have founded the city in 44 BC.

A favorite area with shoppers and sightseers alike is the Spalenberg area. Chain-store brands are absent from these small shops and cafés that line the narrow and often steep alleys that lead uphill from Marktplatz and adjacent Fischmarktplatz (Fish Market).

Like most Swiss cities, Basel has an abundance of fountains. According to the Basel tourist office 170 are scattered through the old town. Most fountains spew out drinking water. The Gothic fountain on the Fischmarktplatz is the most beautiful but the modern Tinguely fountain with working machines is the most entertaining.

Basel has some of the best museums in Switzerland. The best and most famous include:

Basel’s location at the junction of Switzerland, Germany, and France left it with excellent transportation links. The Rhine River is of lesser use but fast highways and railway links run northwards on both sides of the Rhine.

The French TGV trains run from Basel via Strasbourg to Paris while Germany ICE trains connect directly to Freiburg, Karlsruhe, Frankfurt am Main, and beyond. Trains into the rest of Switzerland are very frequent too with excellent connection to amongst other Bern and Zurich.

Basel Airport (BSL) is conveniently located just to the north of Basel in French territory. The airport is used jointly by Switzerland, France, and Germany and the full name is a mouthful – Euro Airport Basel Mulhouse Freiburg. Passport controls between the French and Swiss sectors at the airport were ended in March 2009 but customs checks may still be made at any time when crossing the Swiss border to any European Union member state.

Basel Airport (BSL) is a good bet for cheap flights on low-cost airlines. Cheap tickets and discounted fares are more likely on flights to Basel than to either Strasbourg or Zurich airport.