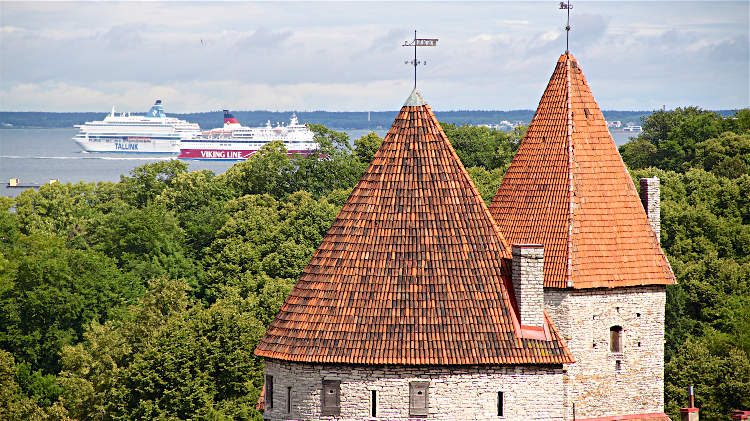 Tallink Silja Line uses large, luxurious passenger and car ferries on the Stockholm to Tallinn route on the Baltic Sea. These ferryboats provide an important transportation link between Sweden and Estonia but are also hugely popular with leisure travelers. The best deals are for mini cruises with the cheapest tickets for travel during the week and outside school holiday periods. Reservations well in advance are recommended for the summer vacations, over long weekends, and year-end holiday periods. Dining, especially the grand buffet smorgasbord, and duty-free shopping are major attractions on these cruises. Cabin reservations are obligatory on Stockholm to Tallinn ferries.

Overnight Ferries from Stockholm to Tallinn 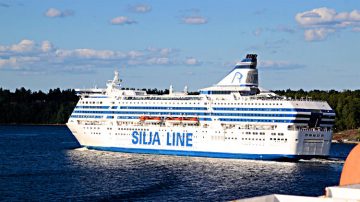 Tallink Silja Line operates luxurious passenger and car ferries overnight from Stockholm in Sweden to Tallinn in Estonia. These large ferries transport up to 2,500 passengers in around 700 cabins. Viking Line operates very similar boats on the Stockholm-Tallinn route but during the summer season only. (St Peter Line and DFDS offer less convenient but often cheaper alternatives.)

The ferry crossing from Stockholm to Tallinn takes around 17 hours, allowing the ships to offer both dinner and breakfast to passengers. Boats generally depart late afternoon (around 18:00) from each city to arrive mid-morning (around 10:00) at the destination. 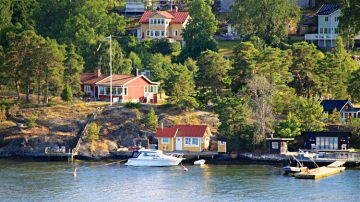 Boarding is usually possible from 90 minutes before the scheduled sailing time. During the night, the boats also stop at Marienhamn on the small island Åland – mostly for tax purposes but some passengers alight here too.

The most spectacular part of the sailing is the two hours nearest to Stockholm. Little of Stockholm is seen – other than rather unattractive industrial areas – but the ferries sail slowly through the spectacular Stockholm archipelago with endless small islands, colorful summerhouses, strategic defenses, and flotillas of leisure crafts if the weather is good. 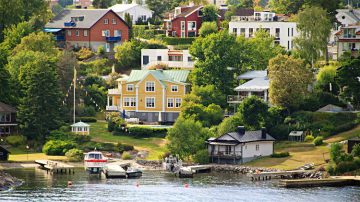 Booking Baltic Sea ferries is generally the easiest and cheapest online – telephone reservations often incur a surcharge. Reservations directly at the various ferry companies are possible but comparative shopping on for example Direct Ferries may be worthwhile to check if special deals are available on different ferry lines or alternative routes. Flexible dates may offer big savings especially if traveling Sunday to Wednesday rather than over weekends.

Mini cruises (“Day in Tallinn / Stockholm Cruise”) are often the cheapest way to travel. The basic idea is to sail from Stockholm to Tallinn, spent the day in Tallinn, and return to Stockholm on the same boat (and same cabin) later the same day. These mini cruises are often cheaper than regular one-way fares but may only be used by foot passengers. During the offseason, such mini-cruise prices may be as low as €45 for four passengers sharing an inside cabin.

Eating, tax-free alcohol, and duty-free shopping are major attractions of the Baltic Sea ferries. These ferry services are as much a means of transportation as a form of entertainment and tax-free shopping for Scandinavian travelers.

Restaurants on the Stockholm to Tallinn Ferries 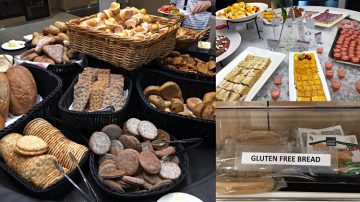 All ferries from Stockholm to Tallinn have a large selection of restaurants and bars ranging from simple cafeterias to gourmet restaurants and the ever-popular grande buffet. For the better restaurants, reserve a table in advance or as soon as boarding the boat. Prices are generally slightly lower than comparable restaurants in Scandinavian capitals but significantly pricier than those in Baltic state capitals.

The grand buffets on Baltic Sea ferries have a long tradition and they remain very popular and good value for money, especially for big eaters. The smorgasbord offered is vast and the quality reasonably good. Soft drinks, beer, and basic wine are included.

These buffet dinners are best reserved in advance and often sell out on busy summer and weekend crossings when there may be two sittings: one directly upon departure and the second sitting around 19:30. The breakfast buffet has a similarly large spread and uses open seating.

Top Tip: The online reservation for the buffet dinner does not include an actual table reservation. Immediately after boarding the ship, go in person to the buffet restaurant and arrange a table reservation, preferably with a window seat. At dinnertime, simply stroll past the queue of travelers queuing up for tables.

Taking an own picnic dinner is commonly done by Scandinavian travelers. 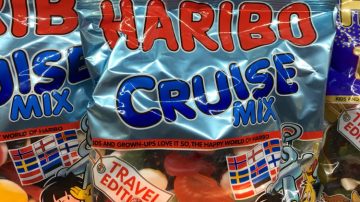 Depending on the boat further entertainment and facilities are on offer. All boats have duty-free shops, where the prices are lower than standard Scandinavian prices due to the tax-free status. Alcohol, cigarettes, and perfume are very popular but also clothes, toys, small electronics, and souvenirs. Some Scandinavian countries have a special tax on sweets, so the chocolates and sweets selections on these ferries are often extraordinarily big. 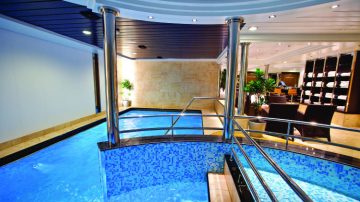 Many boats have a wellness area with day-spa facilities, saunas, and either a small pool or hot tubs – a small charge is payable. Wearing swimming wear is compulsory. These areas are often very popular with families with smaller children rather than adults relaxing. The boats also have special play areas for children.

Nightlife may include shows – some aimed at children are staged in holidays just after sailing, a nightclub or disco, and usually casinos.

Basic wifi in public areas is free but the connection speeds are often frustratingly slow while at sea and when the boat is full. 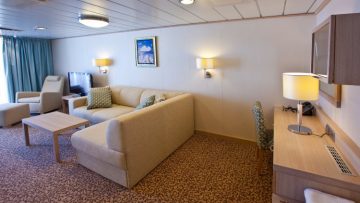 Reserving a cabin is compulsory on the overnight ferries from Stockholm to Tallinn. Quoted prices are usually per cabin and not per person.

Cabins range from a basic inside cabin to luxury suites. All cabins have private bathrooms and showers but the more expensive cabins have more comfortable mattresses and higher quality fittings. All cabins have the basics such as towels, soap, hair driers, and electric sockets. Not all have televisions but it is mostly Scandinavian free-view channels anyway. 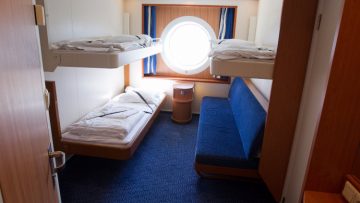 Deluxe cabins and suites usually have a quieter location on the boat with the most luxurious suites often including some meals and an exclusive lounge. For cheaper cabins, only a category is booked with the actual cabin only automatically assigned at check-in with no guarantee that groups will be in adjacent cabins. On quiet sailings, it is often possible to upgrade to a higher category at a discounted price shortly after departure.

Cabins usually sleep two on separate beds or four with added bunk beds. A few five-person family cabins are available. Families may also book linked cabins for up to 8 but a minimum number of children are required for such family cabin deals – book very early during the school holiday season, as the number of family cabins is very limited.

A few cabins for wheelchair users are available on the Tallink Silja ferries. Allergy sufferers could also book special cabins with hard floors and allergy-friendly fittings. These cabins carry no surcharge over regular cabins in the same category.

For solo travelers, booking a bunk in a shared cabin is generally the cheapest deal – these shared places are often a bit hidden on the booking websites. Shared places are either in two or four bunk cabins – sexes separated.

Many ferries have a number of cabins for travelers with pets. Many also have the option to book a pet cage for dogs or other animals and a special section of the outdoor deck for dog walking.

An alternative for drivers – foot passengers are normally not accepted on this routing – is the DFDS nightly ferry from Kapellskar to Paldiski. The DFDS ferry is often significantly cheaper than the direct Stockholm to Tallinn ferry, especially if no cabin is booked. Kapellskar is just less than 100 km to the northeast of Stockholm and Paldiski around 50 km to the west of Tallinn. The crossing time on the Kapellskar-Paldiski DFDS car ferry is around 10 hours.

It is also possible to sail on Viking Line, or on Tallink Silja for that matter, from Stockholm to Helsinki and then change boats for the short hop over to Tallinn. However, this adds complications but is a great option if planning to visit Helsinki as well. Viking Line also has direct Stockholm to Tallinn ferries during the summer season.

The Russian line St Peter (Moby) also has direct connections between Stockholm and Tallinn but the schedule is more limited with the better deals for travelers visiting St Petersburg on mini cruises.

The ferry ports in Stockholm are easily reached on public transportation while Tallinn’s old town is within walking distance of the port (and taxis are cheap).

A lot of walking is often required once inside the ferry terminals. Covered, elevated walkways are mostly used to get across parking lots and other harbor facilities to the terminals and boats. 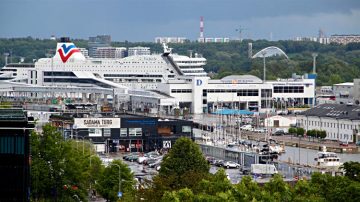 The large ferry port in Tallinn is within easy walking distance from the old town. The ferry port has four main terminals with A closest to the old town and D furthest. Unfortunately, Tallink-Silja ferries usually stop at D.

Walking to the old town is a sensible option from all terminals but taxis are readily available at fairly low prices too. (Taxi prices are not regulated in Tallinn, either compare prices displayed on the rear door window, or use a reliable provider such as Tallink Takso.) 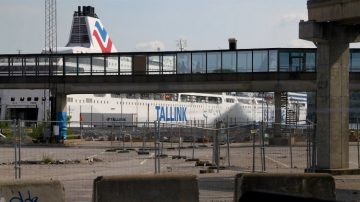 The Värtahamnen ferry terminal to the northeast of the center of Stockholm is used by amongst others Tallink Silja and St Peters Line. Three public transportation options in addition to taxis and cars are available:

Stockholm public transportation tickets are sold at all metro stations, from Pressbyran kiosks, and usually from the information desk on ferries. A basic ticket valid for 75 minutes of travel is SEK43. Tickets are NOT sold on buses or trains. See Public Transportation to Stockholm Ferry Ports for more detailed information.