The Swedish History Museum is one of the top sights to see in Stockholm. Exhibitions include the Vikings and a lot of treasure – all seen for free. 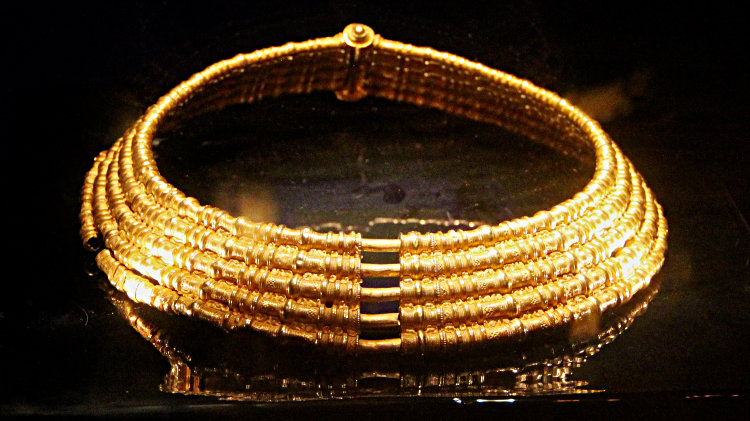 The Swedish National History Museum (Historiska Museet) in Stockholm covers the period from pre-history to the present. The Vikings section is arguably the most interesting to foreign visitors but it is worth strolling through the whole museum and at least glance at the other exhibitions too. The vast collection of gold and silver items in the treasury in the cellars is one of the largest in Europe with some astonishing craftsmanship on display. Admission is free making it sensible to see the various exhibitions on separate visits if time allows.

The Swedish History Museum in Stockholm 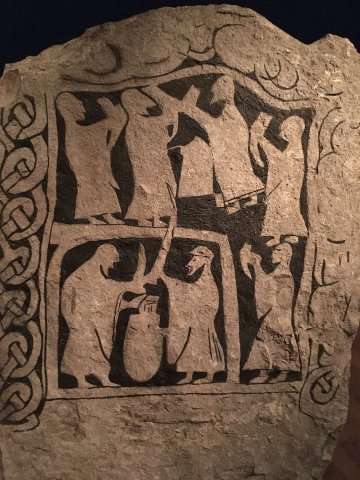 The Historiska Museet in Stockholm is a national museum on Swedish history. This vast museum comprehensively covers Sweden from prehistory to the present in several permanent and temporary exhibitions.

The main permanent exhibitions are prehistory and the Vikings on the ground floor and on the upper floor the History of Sweden (from the 11th century onwards) with separate large medieval exhibitions of art, music and an infamous massacre. The impressive treasury is in the cellar – easily overlooked.

The History Museum is simply too big to take all in one visit. Ideally, see separate sections on different visits – admission is free after all – but if time is limited, concentrate on one or two sections and at least have a quick walk through the rest.

Top Tip: See the gold and silver treasures first – some of these items have incredible details that the tired eye easily overlooks. 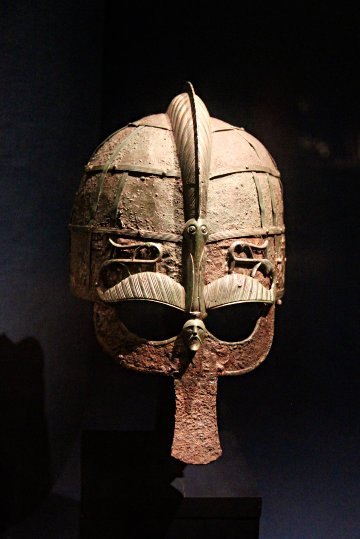 The prehistory section of the Swedish History Museum covers life in what is now known as Sweden in the Stone Age, Bronze Age and Iron Age. Archaeological finds, skeletal remains and models explain the earliest known human activity in Sweden.

The woman from Barum is one of the oldest known women in Sweden. Her 9,000-year-old grave was discovered in 1939. For much of the 20th century she was considered to have been a man as she was buried with hunting weapons. Modern research revealed women commonly hunted and fished in Sweden millennia ago.

An interesting second part is arranged a bit like an airport departure lounge – visitors enter different rooms where a variety of themes are considered. Here smaller items including for example weapons, artifacts, masks, religious and ritual objects are displayed thematically.

An interesting final room also asked the question who creates history and with what agenda? Archaeological finds have been exploited for political and race-biological purposes in the past and certainly will also again in the future. Also, will plastic brushes have to explain our society thousands of years from now?

The Viking Age in the Swedish History Museum

The Viking Age is what draws many visitors to the museum and the exhibition does not disappoint – it is the largest in the world. Although the Viking Age lasted only from around 800 to 1050, it still dominates many visitors view of Swedish and Scandinavian history.

The museum explains that the Vikings were mostly peaceful traders, farmers, hunters and craftsmen but certainly does not ignore the more popular warring, raiding and rampaging activities. 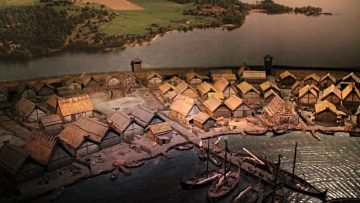 Major themes include Viking society, the role of the aristocracy, interaction with other nations – mostly, but of course not always, peaceful – and the importance of religion and Nordic mythology that eventually was replaced (or mixed) with Christianity.

Displays include rune stones, period dress and jewelry, artifacts, and weapons – both for ceremonial and war use. A large model shows the development of Birka on Lake Mälaren – one of the first quasi-urban Viking communities and a major source of archaeological finds.

Other Scandinavian museums with top prehistory and Viking exhibitions include the National Museum of Denmark in Copenhagen and the superb Moesgaard Museum outside Aarhus.

History of Sweden in the Historiska Museet

The History of Sweden exhibition covers a thousand years of Swedish history from the 11th century to the present. A strip of dates on the floor leads visitors through the exhibition with each century having its own room with highlights and main events from the period.

Highlight include amongst others: 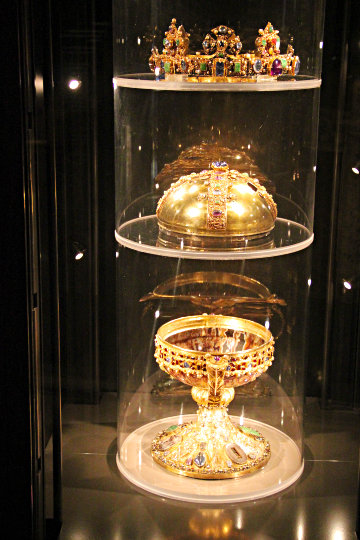 The Swedish National History Museum has three special exhibitions on medieval history – all worth at least a glance but very rewarding in detail too:

The Medieval Massacre – the Battle of Gotland 1361

This exhibition tells in gory detail with many archaeological finds the gruesome event when 1,800 protesting Gotland farmers were brutally mowed down by the Danish soldiers of King Valdemar Atterdag.

The large collection of armor, weapons and remains of the dead is unique in the world for its state of preservation. Visitors may try some weaponry and chainmail. A large amount of information on this event is available in electronic form on touchscreens in the museum (or via any internet link). 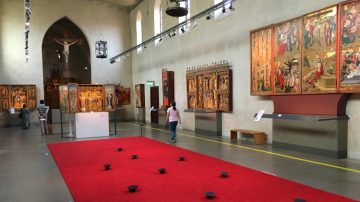 The museum has a large collection of medieval art – most, but not all items are of a religious nature with many large items such as altarpieces, statues, crucifixes, stained-glass windows and statues. From 1050 to the late 16th century Sweden was Roman Catholic and this strongly dictated art.

Byzantine influences are clear in some early works confirming the trading links that the Vikings had with the eastern part of the former Roman Empire. German, French and Flemish influences are more obvious in later works that link to the church in Rome.

This small but wonderful section is on organ music and church bells of the middle ages. Several medieval bells are on display but the organs are the more important items.

Two of the oldest organ casings in the world are in the museum:

A modern bellows and an organ pipe allow visitors to play few notes and explore how a pipe organ functions.

The Gold Room in the Swedish History Museum 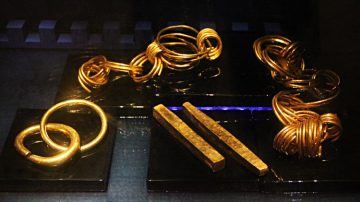 Since the 17th century, the Swedish state had to buy all gold and silver treasure older than a century. As a result, Sweden has one of the largest collections of prehistoric gold and silver in the world.

The Gold Room in the cellars of the history museum is filled with 52 kg gold and more than 200 kg of silver treasure. The oldest items date from around 1500 BC while the success of Sweden during the Thirty Years War also contributed a large number of medieval items from Germany. 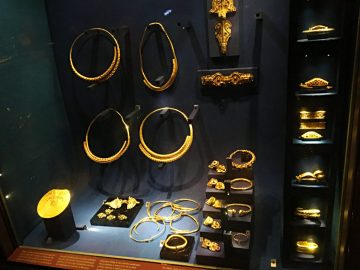 Some of the most impressive items are three gold collars from the 5th century that were unearthed in the 19th century. These may be the oldest regalia in Sweden with signs of wear indication that they were actually used – by whom and for what purpose remains unclear.

Many items are of religious importance, whether Nordic mythology or Christianity. Others are symbols of political power and wealth. Coins and jewelry are also on display, as are big clunks of precious metals that could also be used as currency and storage of wealth. 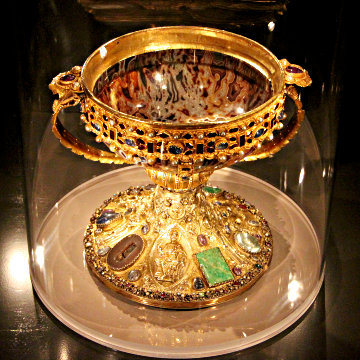 Sweden’s successes during the Thirty Years War also contributed rich war booty to the collection – some items are display elsewhere in the museum too. The most impressive item is the large reliquary of St Elizabeth of Thuringia that the Swedes took after capturing the Marienberg fortress in Würzburg in 1632. This large reliquary includes an agate bowl from late antiquity, gemstones from the 11th century and further goldsmith work from the 13th century including two crowns and an elaborate stand.

To fully appreciate the fine details in many of these works, see the Gold Room first; or even better, see it alone on a separate visit. 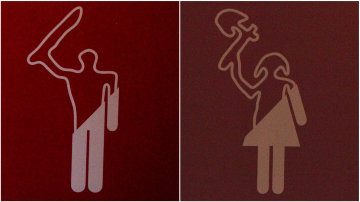 The Swedish History Museum is open:

Rather surprisingly, the Swedish History Museum is open on most public holidays including New Year’s Day

Admission is free to all exhibitions but charges may apply to concerts, events and some tours.

English guided tours are offered mostly in summer while the audio guide is cheap and available in various languages.

Most items are described in both English and Swedish.

Transportation to the Swedish History Museum 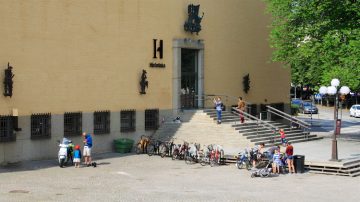 The Swedish History Museum (Historiska museet), Narvavägen 13–17, 114 84 Stockholm, is conveniently located in central Stockholm near many other tourist sites. It is on the continuation of the main road over the bridge from Djurgården Island.

Bus 67 stop directly in front of the museum at stop Historiska museet but the Djurgårdsbron stop on bus 69 and 76, as well as tram 7 is often more convenient. Most Hop-on Hop-Off buses also stop here.

The T-bana metro stops Karlaplan and Östermalmstorg (red line) are both a few short blocks from the museum with Karlaplan the more convenient.

Karlaplan and bus 76 are both very convenient for travelers on mini-cruises or taking the Tallink Silja ferries to Helsinki, Tallinn and Riga, or the St Peter Line boats to St Petersburg.

Several further top sights are within easy walking distance from the Swedish History Museum. Most of these are on Djurgården Island – walk or use bus 67 – such as the Nordic Museum, the very impressive Vasa Museum, Skansen open-air museum, ABBA The Museum, Gröna Lund fun fair park and the free boats of the maritime museum.