Buying tickets for the popular Abba The Museum in Stockholm in advance is easy online and essential for skip-the-line priority time slot admissions.

The ABBA Museum in Stockholm tells the story of Sweden’s most popular pop group ever. It is the Holy Grail for dedicated ABBA fans but most visitors will appreciate a visit to this fun museum. The ABBA Museum is one of the more expensive sights to see in Stockholm and unashamedly commercial but like the music undemanding and easy to enjoy. Admission is only by time slot tickets that are cheapest when buying online.

ABBA The Museum in Stockholm 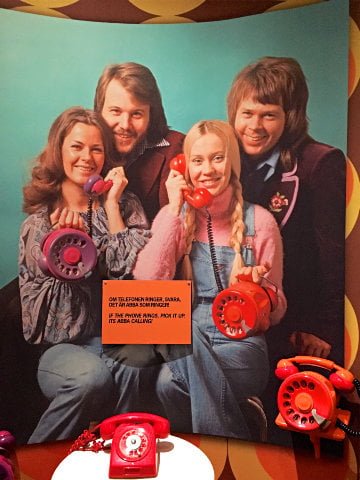 ABBA The Museum, often inverted to the simpler The ABBA Museum, opened on the Djurgården Island in central Stockholm only in 2013. The museum has the support of all four ABBA members: Benny Andersson, Björn Ulvaeus, Anni-Frid Lyngstad and Agnetha Fältskog.

The ABBA Museum’s Walking In, Dancing Out permanent exhibition tells the story of ABBA and its members from performing at rural festivals in Sweden to a worldwide phenomenon and back to pursuing lower-key individual projects. Many original and personal items are seen while interactive displays allow visitors to try being ABBA too.

Further temporary exhibitions are mostly not directly related to ABBA but rather on Swedish pop music, the Eurovision competition, and similar music-related themes.

The ABBA Story in the ABBA Museum in Stockholm 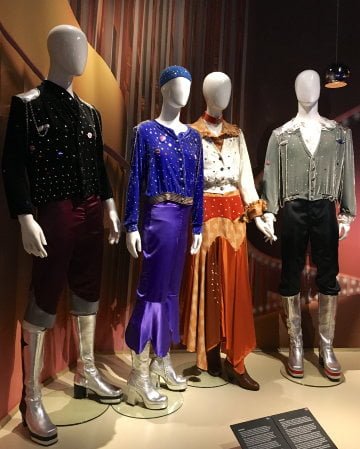 ABBA became a worldwide phenomenon after winning the Eurovision 1974 competition with Waterloo – still considered the best and most successful song ever performed at this major music event.

However, in Sweden, the members of ABBA were already established and successful performers in the early 1970s. The ABBA Museum starts off with the careers of the members before ABBA.

Benny Andersson and Björn Ulvaeus met in 1966 and soon started writing music together but usually performed separately with different bands and artists. A cut-up Volvo Amazon station wagon as used for touring festivals during this period is on display. The singers Anni-Frid Lyngstad and Agnetha Fältskog were already established singers by the time they met the men. 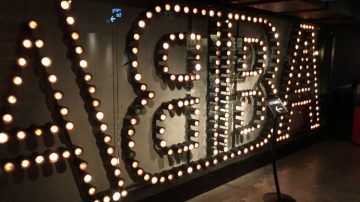 The four cooperated in various projects but only formed a four-member band in 1970. The first record released with all four members performing together was Hej Gammle Man (Hi old man).

The foursome had several minor hits in Sweden before Ring Ring in 1973 also had some success abroad but failed to get the four into the Eurovision competition. The telephones used in the video are on display in the museum. Answer if the special phone rings: allegedly only the four ABBA members have the number and occasionally one of them does call.

The group used various permutations of their names but only became ABBA in 1973 despite a fish canning company in Sweden already using that name – its products are still found on supermarket shelves in Sweden.

The famous ABBA with a reversed B was only used from 1976, after Benny had held his B up that way for a joke in a photoshoot. This version of ABBA is trademarked but cannot be copyrighted on its own.

Naturally much is made in the museum of the Eurovision 1974 competition. It was Björn and Benny’s third attempt to write Sweden’s entry and this year they were successful with the song Waterloo.

ABBA was certain they had a hit but to make sure the judges and juries remember their performance wore glamorous if highly impractical stage wear. Something that would become almost a trademark of their live performances – many original stage costumes are on display in the museum.

The Swedish success was not universally welcomed. ABBA was out of favor with some faction of the Swedish music and broadcasting industry and wasn’t even invited to the 1975 competition that the Swedes had to arrange and finance. 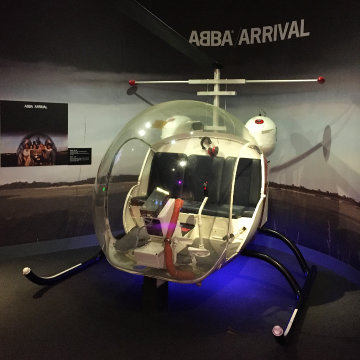 Although Waterloo charted in many countries and was number one in the UK and Germany, ABBA did not experience instant stardom. Superstardom only followed in the period 1976 to 1981 when ABBA moved away from glam-rock to pure pop.

During the late 1970s ABBA was often described as Sweden’s biggest exporter and a larger tax earner than Volvo.

This period is of course well covered in the museum. The Gold Room has a large collection of memorabilia, album covers, and original stage costumes from this period.

ABBA never formally dissolved and the museum is also very brief on the decision to take a break made at the end of 1982. Anni-Frid Lyngstad and Agnetha Fältskog had some success with solo projects while Benny ad Björn continued to write songs and musicals.

The musical Mamma Mia! (1999) and especially the movie released in 2008 that uses the music (but not the story) of ABBA ensured the group’s continued popularity and helps to explain the large number of teenagers visiting the museum.

Special Displays in the ABBA Museum 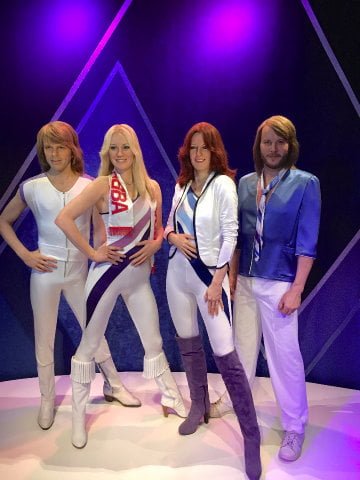 Some of the special displays in the ABBA Museum include:

The museum is not very big but there is enough to keep most visitors occupied for an hour or so – a bit more time may be required by dedicated fans and to play with all the interactive displays.

Opening Hours of the ABBA Museum in Stockholm 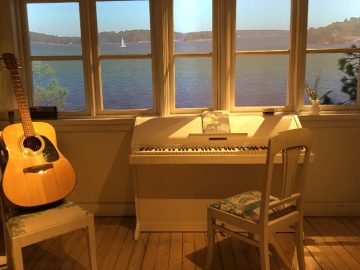 The rest of the year, opening hours are an hour or two shorter, usually opening at 10:00 and closing at 18:00 but opening hours may be longer during holiday periods. The ABBA Museum is open on most vacation days but not Christmas Eve.

Tickets for the ABBA Museum 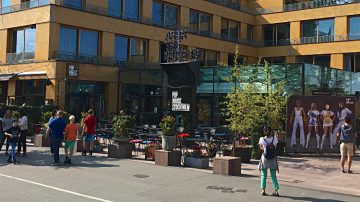 The ABBA Museum is amongst the more expensive sights to see in Stockholm. Admission is only by time slot tickets, which keeps the museum relatively crowd-free giving all visitors a fair chance to use the interactive items.

Tickets for the ABBA Museum is SEK250 for adults and SEK95 for children 7 to 15.

A family ticket – only available directly at the museum but telephone reservations are possible – is SEK595 for up to two adults and four children. 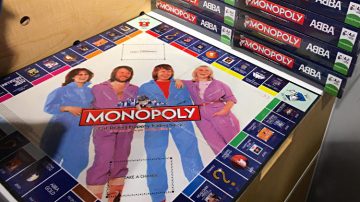 ABBA The Museum is one of very few top sights in Stockholm where the Stockholm Pass is not accepted.

Tickets may be bought online through the museum’s reselling partners such as Swedish Railways, Tiqets or Get Your Guide. Tickets bought in person at the museum are a few kroner more expensive, although free internet terminals are set up in the foyer to buy for regular online prices. Except when huge boat tour excursion groups visit the museum, tickets are often available with only a very short wait.

The ABBA Museum and Shop full of ABBA memorabilia only accept card payments, no cash.

Transportation to the ABBA Museum 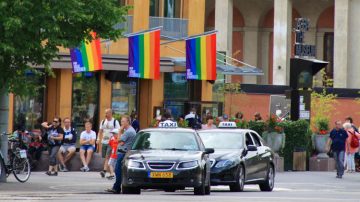 Getting to the ABBA The Museum, Djurgåresvagen 68, Djurgården, 102 52 Stockholm, is easiest by public transportation as parking on the Djurgården Island is limited and some roads closed during busy periods. The museum is in the Pop House Hotel building with music-related bedrooms and restaurant.

Tram 7 from the center as well as bus 67 stop nearby at the Liljevalchs / Gröna Lund stop, while bus 69 and 76 stop just off the island at bus stop Djurgårdsbron. 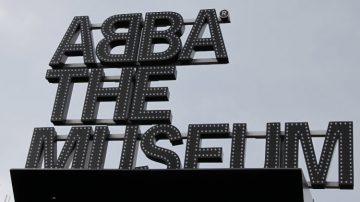 The closest metro station is Karlaplan on the red line. From here take bus 67 or walk in about 15 minutes – consider stopping in the fantastic free Swedish History Museum en route – lots of Vikings and treasure!

The most pleasant way to arrive at Djurgården is by ferry from Slussen (all year) or during summer from Nybroplan. Many hop-on-hop-off boat services also call here. The ABBA Museum is short block from the ferry landing. Combination tickets for Hop-on Hop-off boats or buses with ABBA The Museum sometimes give a small discount.

Other Sights Near the Vasa Museum in Stockholm

Several further major tourist sights are on Djurgården Island. The Vasa Museum with a complete 17th-century warship is one of the top sights in Sweden. The Nordic Museum (Nordiska Museet) is a giant in Swedish applied arts. The huge Skansen open-air museum with a zoo and the Gröna Lund fun-fair park are basically across the road from the ABBA Museum.