The 17th century Vasa warship is at the heart of the popular Vasa Museum and one of the top sights to see in Stockholm and Sweden. 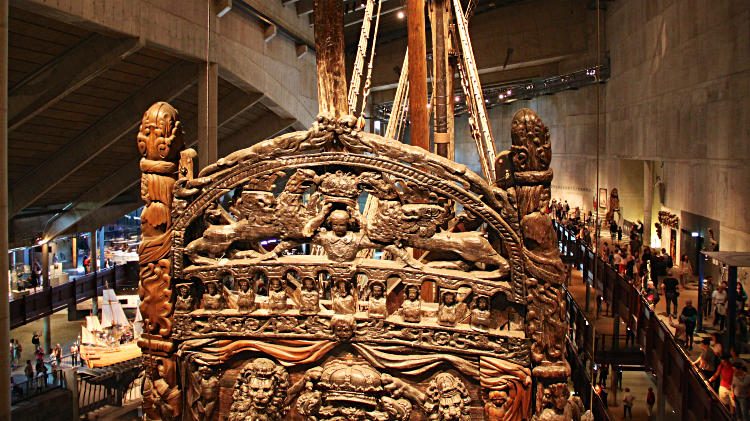 The Vasa Museum in Stockholm was built around the Vasa warship that sank on its maiden voyage in 1628. The Vasa was salvaged during the 1960s with a remarkable 98% of the woodwork surviving three centuries under water. It is the only complete 17th century ship on display in the world. The Vasa is worth a journey (and seeing the rest of this maritime museum is pretty interesting too). Buy Vasa tickets online in advance.

The Vasa Museum in Stockholm 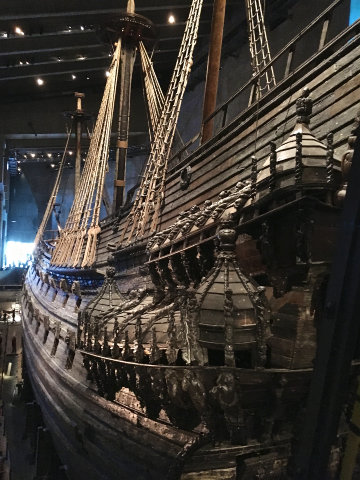 The Vasa was built during the Thirty Years War to become the flagship of Swedish King Gustav Adolf’s fleet. However, the mighty vessel with two gun decks sank half an hour into its maiden voyage in 1628. Although the cannons were salvage in the 1660s, the rest of the wreck was forgotten until a chance rediscovery in the mid-20th century. It was salvaged and reemerged from the sea after 333 years.

The Vasa Museum Djurgården Island in central Stockholm was built around the Vasa warship that has an astonishingly 98% of the woodwork the preserved original. The rope work is new but some sails and clothing survived and are on display in the museum.

The Vasa – A New Flagship for Gustav II Adolf 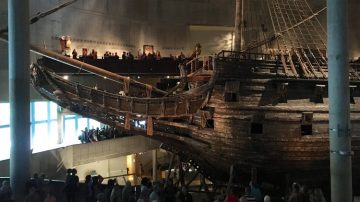 King Gustav II Adolf commissioned the Vasa from Dutch master shipwright Hendrik Hybertsson in 1625. The Vasa – named after the Swedish royal dynasty – was to have been the most powerful ship in the Baltics.

In contrast to common practice in the period of boarding and capturing enemy ships, Gustav Adolf placed more faith in artillery and was contend with the idea of simply sinking enemy ships. He thus demanded a ship that could carry 72 cannons, which required two gun decks rather than the normal single gun deck commonly used at the time. 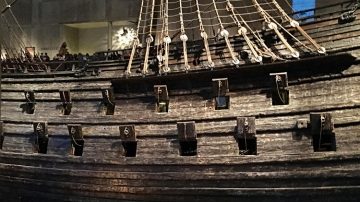 The Vasa was 69 meters long and 50 meters tall from keel to the top of the main mast. When launched, it weighed 1200 tonnes and had ten sails, 64 cannons (a further 8 were still on backorder), 120 tonnes of ballast and more than 1200 carved wooden adornments including around 700 statues.

Even before completion of the ship, some in the navy realized the ship was dangerously unstable. However, with the king not in Stockholm, no one felt able to warn him of the deficiencies of the vessel.

The Sinking of the Vasa 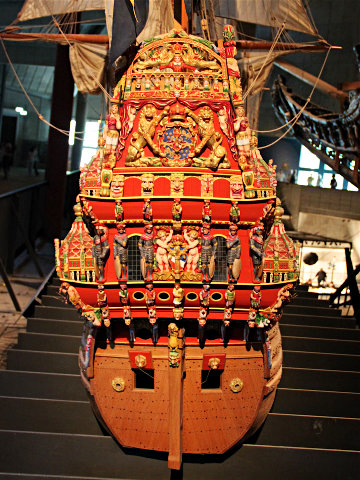 On 10 August 1628, the Vasa left port on its maiden voyage. It sailed 1300 meters before it heeled to port, took water in through the open gun-ports and sunk within minutes. Rather than impressing the local nobles, ambassadors and countless foreign spies, the Vasa sank only 120 m from the shoreline with the loss of around 30 lives. The water was only 32 m deep so the main mast stuck out as a reminder of a farcical catastrophe rather than a brilliant show of force.

Fortunately for all involved, the king was away in Prussia fighting the Polish. An inquest was halted once the builders made it clear the ship was built according to the king’s personal wishes and approval. Hybertsson, who died shortly before completion, was mostly blamed but nobody was officially sanctioned and all senior figures involved continued and prospered in their careers. 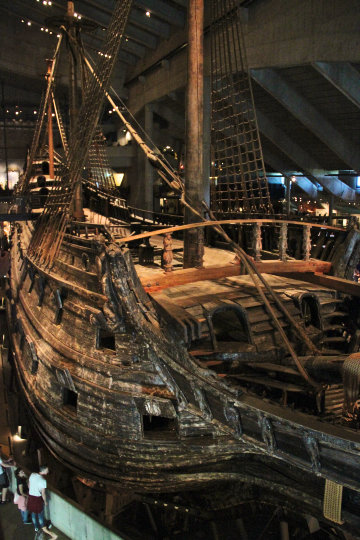 Most experts agree that the ship was simply too narrow for its height and weight. The king’s insistence to add more cannon certainly contributed to the lack of stability but the main problem was placing the decks too high rather than the weight of the cannon themselves. Using the wrong kind of ballast didn’t help either nor did the open gun ports.

A second similar ship, The Apple, which was already under construction and thus not altered in response to the disaster, was only a meter wider and sailed without problems.

Attempts to raise the ship failed but in the 1660s, most of the bronze cannons were salvaged – these were worth far more than the ship. Two of the original cannons are on display in the Battle exhibition on level five, together with modern copies.

In 1956 the Vasa was rediscovered in an astonishingly complete condition – the front mast was even standing. The Vasa was raised in 1959 but only in 1961 lifted out of the water. The conservation and drying out process would take decades. The ship went on display in 1962 but only in 1990 moved into the special purpose-built climate-controlled museum where it is seen today.

The Vasa Museum in Stockholm 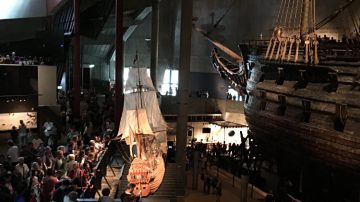 The 17th century warship Vasa is displayed in its full glory in the center of the Vasa Museum in Stockholm. Visitors are not allowed on the vessel but may come very close and inspect it from all sides and all angles from galleries on six different levels.

The free half-hour guided tour is a great way to start a visit to the museum, as is the short video on the ship and its salvage. The video is constantly shown with all versions having at least English sub titles. 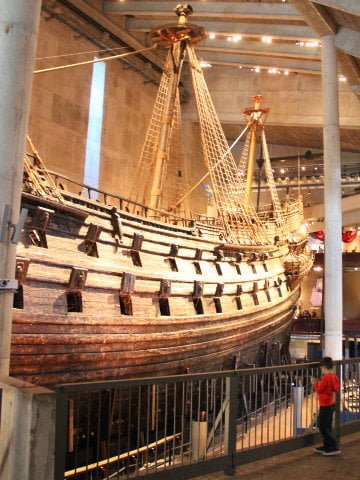 A good place to start a visit, or wait for the start of the tour, is the 1:10 scale model of the Vasa. The model is painted to show how the warship – now mostly in dark brown and black – would have appeared in the 17th century.

From here, ascent to the higher levels to admire especially the large numbers of sculptures that survived. Each floor has a variety of exhibitions to explain related themes such as the symbolism of the sculptures, how sailboats navigate, life on board, how the ship was originally built in the 17th century and preserved in the 20th.

Some of the unique items rescued from the Vasa include one of the ten original sails – it may be the oldest surviving sail in the world. Despite an impressive 32 square meters it was the smallest of the sails on board. Only four sails were in use on the fateful day of the Vasa’s sinking, which allowed some of the rolled up sails to survive the elements for three centuries.

Sculptures on the Vasa Warship 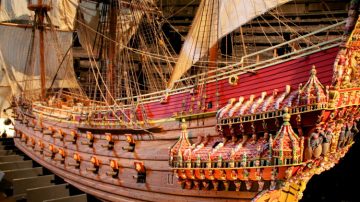 The Vasa was decorated with around 1200 wood carved items including 700 sculptures of which most survived. The sculptures in mostly Dutch grotesque style were brightly painted – this warship was not hiding, it had to scream powerful Sweden to the enemy.

The Vasa was a floating advertisement of Sweden’s naval might, a propaganda vessel without subtleness or humility – the Vasa was a symbol of the glory of the king. 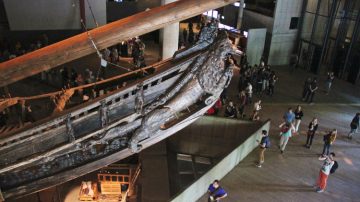 Ever single statue had a specific symbolism. The lion is often repeated as Gustav II Adolf Vasa was considered the lion of the north. The figurehead is a three-meter long lion leading 20 sculptures of Roman emperors.

Clearly the king was the heir to the Roman Emperors – during the Thirty Years War Sweden built an empire on the Baltic to rival other major European states. Other statues linked Gustav Adolf to Hercules and the biblical hero Gideon.

Poland was the main enemy of Gustav Adolf at this period – partly by having an uncle – Sigismund – on the Polish-Lithuanian throne that also had some legitimate claims to the Swedish throne. Statues on either side of the ship show Polish noblemen cowardly hiding under tables, while directly facing the crews’ toilet. 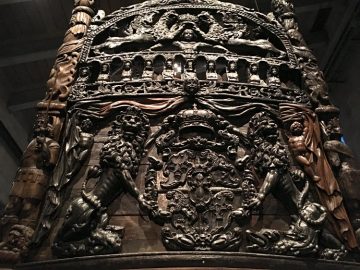 The most-impressive art works are on the stern with the huge royal coat of arms. Below the royal coat of arms, two angels hold the symbol of the Vasa dynasty – a sheaf of wheat (or Vasa in Swedish). Above the coat of arms two griffins – the symbols of his father Swedish king Charles IX – crown the young Gustav Adolf.

The “Imagery of Power” exhibition on the top level explains the symbolism of the adornments used on the Vasa. A further “Power and the Glory” exhibition on a lower level uses more painted sculptures to place the imagery of the Vasa into historic context. 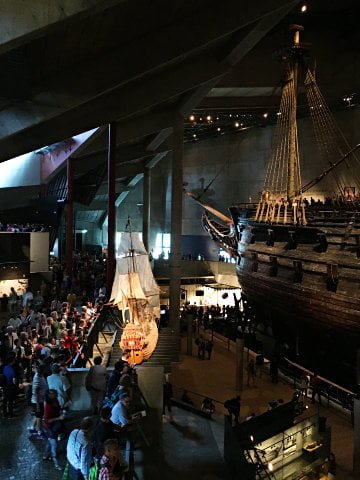 The Vasa Museum in Stockholm is open daily:

Top Tip: Arrive early during the high season but during the quieter months try to arrive just in time for the free English guided tour. Alternatively download the free audio guide – available in a variety of languages.

Free wifi throughout the museum.

Tickets for the Vasa Museum are SEK170 (SEK150 for students) and free for children under 18. Buy Vasa tickets online in advance.

A Silver Ticket giving admission for a year is cheaper than two admission tickets at SEK200. A Golden Ticket (SEK300) allows admission plus entrance onto the deck of the ship itself during the second year of holding the season ticket and every seventh subsequent year.

The Stockholm Pass is valid and gives priority admission. Combination packages including tours, boat trips and other sites with Vasa Museum priority admission are also available from for example Get Your Guide.

Transportation to the Vasa Museum 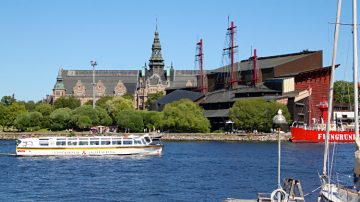 Getting to the Vasa Museet, Galärvarvsvägen 14, Djurgården, 102 52 Stockholm, is easiest by public transportation as parking on the Djurgården Island is limited and some roads closed during busy periods.

Tram 7 from the center as well as bus 67 stop nearby at the Nordiska Museet / Vasamuseet stop, while bus 69 and 76 stop just off the island at bus stop Djurgårdsbron.

The closest metro station is Karlaplan on the red line. From here take bus 67 or walk in about ten minutes – consider stopping in the fantastic free Swedish History Museum en route – lots of Vikings and treasure!

The most pleasant way to arrive at Djurgården is by ferry from Slussen (all year) or during summer from Nybroplan. Many hop-on-hop-off boat services also call here. It is a pleasant five-minute walk from the ferry landing to the Vasa Museum.

Other Sights Near the Vasa Museum in Stockholm

Several further major tourist sights are on Djurgården Island. The Nordic Museum (Nordiska Museet) is a giant in Swedish applied arts while the huge Skansen open-air museum with a zoo is just uphill. On the waterfront is the Junibacken for children into Pippi Longstocking and other Astrid Lindgren characters. Several further boats of the Swedish National Maritime Museum are moored here with free admission to all.

Near the ferry landing is the ABBA Museum – advance time-ticket purchases generally essential – a further entrance to Skansen and the Gröna Lund fun-fair park.

Don’t miss the Swedish History Museum – about five minutes stroll up the main road back on Östermalm. It has more historical information on the Vikings (and other eras) than other widely advertised Viking exhibitions and is completely free.