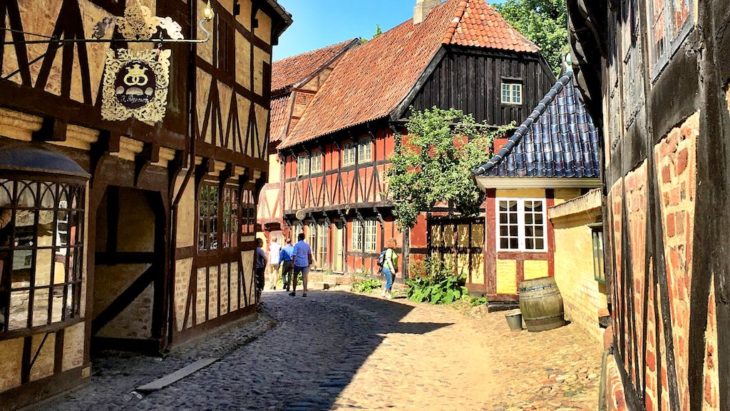 Den Gamle By in Aarhus in Denmark is a large family-friendly open-air museum with typical historic old town buildings from the 1700s to the mid-1970s. Around 75 buildings here showed Danish town life in bygone years. Buildings range from poorhouses to noble town palaces with many open to visitors and furnished typically for the period and original use. Depending on the season, many skills and trades are demonstrated. Admission is free for children up to 18 making this open-air museum a very family friendly destination popular with travelers of all generations.

Den Gamle By in Aarhus, Denmark 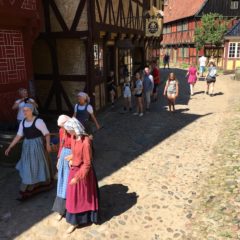 Den Gamle By is a vast open-air museum in the heart of Aarhus, the second largest city in Denmark. Den Gamle By directly translates as The Old Town and in contrast to many other similar open-air museum, the old buildings on show here are from towns and cities rather than farmhouses and rural dwellings.

Just over 75 buildings are currently on display in Den Gamle By and divided into three zones: the largest section is filled with buildings from the 18th and 19th centuries, a smaller section shows a typical Danish town from around 1927, while a city block with typical apartment buildings from around 1974 is the newest – and surprisingly interesting – part of the outdoor museum complex. 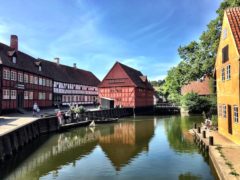 In addition to the many houses and workshops that are open and furnished in period or to a specific theme, several formal museums are also part of Den Gamle By with a large Aarhus history museum opening in 2017.

Personnel dresses up in period costume and during the high season many trades and skills are demonstrated. Visitors may try their hands at various activities. 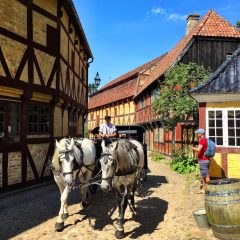 The largest part of Den Gamly By consists of picture-perfect town buildings from the late 17th to early 20th centuries. These buildings range from humble almshouses and pauper’s dwellings to the grand mayor’s house and mint master’s mansion on the town square.

The buildings of Den Gamle By were all brought to Aarhus from various parts of Denmark but the layout of the museum is beautifully done to resemble a typical 18th or 19th century Danish town with typical streets, squares, courtyards and water features.

This part of the museum shows Denmark, as it must have looked at the times of Hans Christian Andersen, although many a rural town in Denmark still have old town centers not far removed from what is on show here. The Eilschou Almshouses close to the main entrance were moved here from Odense and is the actual home that Andersen referred to when writing about “the first house belonging to the educated class into which I was kindly received.” 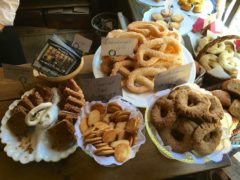 Many of the buildings have exhibitions in keeping with the period while the bakery still sells very tasty treats using recipes from before 1880. In the tradesmen’s street, children may try their hands at various skills including building a typical wood frame for a multistory building. Try a coffin for size in the carpenter’s workshop.

This area is also full of street signs allowing the illiterate to easily identify establishments. The candle maker, hat maker and tailor are easy to find; Danish bakeries still often use the pretzel sign while the tobacconist is probably harder to identify by modern visitors.

Modern Times in Den Gamle By 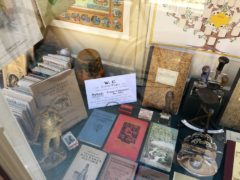 The Modern Times section of Den Gamle By shows a typical Danish town in 1927. Shop windows got larger with more advertising and items on display to entice shoppers into the establishments. Some of the shops are still functioning with wares on offer typical from the mid-1920s.

This part of the town also has a typical village museum with the pile them high approach to displaying the town’s historic treasures. The Jule Butik Museum has Christmas decorations on display and for sale year round.

More impressive is the Toy Museum that has around 5,000 toys on display – almost all don’t touch. These include mostly toys from the 19th and early 20th centuries. 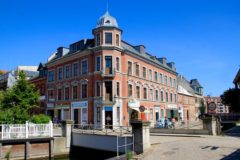 The newest part of Den Gamle By is a typical city block from 1974. This section is entitled Welfare and Open-Mindedness and shows the typical living and work environment of Denmark as a social-democratic state during much of the 20th century.

Here visitors may see several buildings with shops, offices and apartment carefully furnished, often with the help of former tenants. Visitors see how different families living in similar apartments lived and furnished their homes, e.g. a retired couple, students in a commune, Turkish migrant workers, and a hippie couple with child.

This section gives a fascinating view of life in Denmark in the mid-1970s and is surprisingly engaging. It is also fun to observe older visitors having to explain to grandchildren what a “real” telephone is and how a typewriter works.

Don’t miss the gynaecologist consultation room – complete with an overflowing ashtray, as patient and doctor discussed issues while enjoying a relaxing smoke. Pouls Radio shop is also very popular – Danes continue to have a fascination with well-designed, if pricey, sound systems.

This part of the town also has two of the formal museums. The Poster Museum has a changing display of posters from around the world with a large section of classic Danish posters promoting anything from tourism to political activism. The Gallery of Decorative Arts has the museum’s collection of clocks, silverware and porcelain.

Opening hours, admission fees and activities at Den Gamle By depends on the season. The main season is from Easter to New Year – with Christmas and Advent particularly beautiful – but activities are most common during school holidays and weekends.

Plan on spending at least several hours at Den Gamle By. It is easy to spend half a day, or even more, in this open-air museum.

Admission Tickets for Den Gamle By 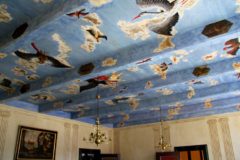 Admission fees for Den Gamle By depend on the season – the more buildings open and the more activities, the higher the price.

Admission for adults ranges from a high of DKK135 (summer, school holidays, Christmas season and weekends) to a low of DKK75 (most of January to March).

Admission is free for children under 18 years old.

Free wifi is available in some parts of the museum complex.

Food and Drink at Den Gamle By 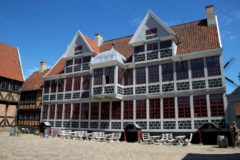 Several restaurants, cafés and bakeries operate in Den Gamle By but opening hours depend on the season.

Visitors may bring their own food and drinks into the open-air museum – this is very commonly done by Danish families. The museum has a special picnic and play area but as in any town, eating in the streets is allowed.

Transportation to Den Gamle By 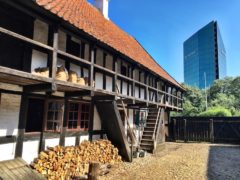 Den Gamble By, Viborgvej 2, 8000 Aarhus C, tel. +45 86 12 31 88, is to the west of Aarhus town center next to the botanical garden. It is possible to walk from the town center but distances could be long and a lot of legwork will be required inside the museum complex too. Several buses stop close to the museum.

Parking in the streets near Den Gamle By is mostly free but subject to the usual, and often complicated to comprehend, Danish time restrictions. Some streets have five hours of free parking but others may be shorter. Formal parking garages with charges are available nearby. 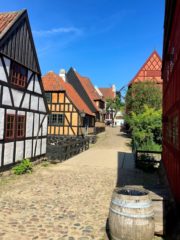 Den Gamble By is one of the three top Aarhus museums that should be very high on the priorities list of any visitor. The others are the ARoS Aarhus Art Museum – a few blocks away – and the superb Moesgaard Museum of Archaeology and Anthropology just to the south of Aarhus.

Open-air museums are very popular in Scandinavia. The Frilandsmuseum outside Copenhagen is part of the Danish national museum while the Kulturen in Lund, near Malmö in Sweden follow a similar town rather than rural concept. Many rural and small town in Denmark still have town centers with many similar old buildings with Ebeltoft near Aarhus often seen as the most Danish of towns in this regard.

See more photos of Den Gamle By on Flickr.