The Bayeux Tapestry is one of the greatest medieval artworks. It depicts the story of Harold, William the Conqueror, and the Norman conquest of England in 1066. 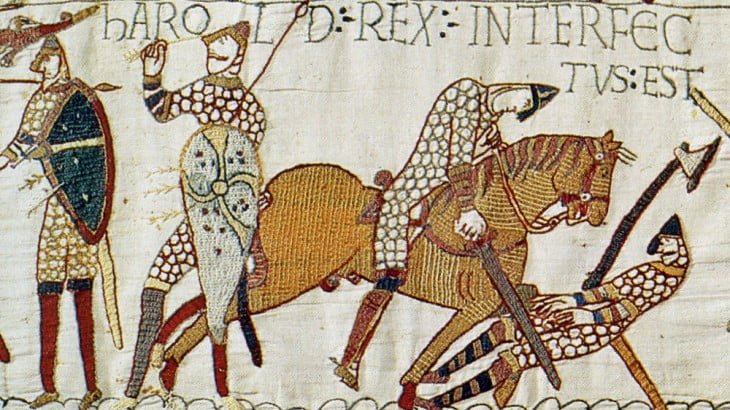 One of the greatest artworks of the Middle Ages is the Bayeux Tapestry. This 70-m long embroidered cloth is a political statement par excellence. It tells the story of Harold, earl of Wessex and briefly king of England – and William, duke of Normandy and ultimately king of England. It is a tale of honor, dishonor, deceit, conquest and defeat – political propaganda has never been illustrated more beautifully. This masterpiece can be admired in the Bayeux Tapestry Museum in Normandy, France. UNESCO included it as an item in the Memory of the World.

The Bayeux Tapestry is one of the greatest masterpieces of medieval European art. Much of its history and symbolism are still shrouded in mystery with facts being disputed.

The Bayeux Tapestry is not a tapestry at all but an embroidered linen cloth, 50 cm (19”) wide and currently weighing 350 kilograms. The more impressive bit is its length of 68 m (224 feet) – the final bit is missing so no one knows what fails, or how much.

The tapestry has a main panel measuring 33 cm (13”) in the center and two narrower borders of 7 cm (2.75”) each at the top and bottom. The main events are illustrated in the central panel in 58 scenes – the numbering was added in 18th century when the 9 panels of the tapestry were attached to a further piece of fabric to protect the cloth.

The Bayeux Tapestry covers the period 1064 to 1066. King Edward the Confessor of England sent Harold to Normandy to inform Norman Duke William that he, William, was chosen by Edward to be his successor. It ends with the defeat of Harold at the Battle of Hastings in 1066. The missing bit probably showed the coronation of William the Conqueror as William I of England.

The Bayeux Tapestry was created around 1070. It was long thought that it was commissioned by Queen Matilda, wife of William the Conqueror, or even made by the queen and her ladies in waiting. In French (and several other European languages) it is often referred to as Tapisserie de la reine Mathilde.

Current thinking had it commissioned by Bishop Odo, half-brother of William the Conqueror. He was the bishop of Bayeux but his real powerbase was in England, as after the conquest he was appointed earl of Kent. The embroidery was probably done in Kent and displayed in England before being hung in the new cathedral in Bayeux, which was dedicated in 1077.

Through the centuries, the tapestry has been on display in the Bayeux Cathedral during the first week of July. It was in Paris a few times but mostly stayed in Bayeux. It is currently on permanent display in the Musée de la Tapisserie de Bayeux.

The Story Depicted on the Bayeux Tapestry

The Bayeux Tapestry is a political statement – it depicts the reasons for the conquest of England by William from a Norman viewpoint: Harold betrayed the trust of King Edward as well as the oath of loyalty he sworn to William and thus justified the invasion of England. It is one-sided – which political account isn’t? – and plays a bit loose and fast with the facts but is roughly inline with contemporary thinking.

The tapestry does not actually say why Harold was sent to Normandy or what oath he sworn to William in Bayeux. However, his deceit was so well known in 11 th-century Normandy that pointing out the obvious was not necessary.

The main events on the Bayeux Tapestry are:

Stylized trees frame most of the main scenes. (These trees are also used on bronze medallions marking the suggested walking route through the streets of old town of Bayeux.) 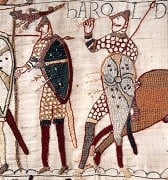 Probably the most famous single scene (#57) from the Bayeux Tapestry is King Harold dying from an arrow in the eye. The scene is disputed: some think it is not Harold at all, while the arrow may be a later addition. It could possible have been originally a lance – medieval iconography often showed a perjurer, which Harold obviously was in Norman eyes, dying from a stab in the eye.

The borders are as interesting as the main event. These include animals and mythical figures but also scenes from daily life in the 11th century including farming, boat building, and of course war.

The meaning of many scenes and iconography are unclear or at least still being disputed, e.g. the naked figures. Many interpretations are possible of the scene (bottom panel of scene 13) with the naked man and woman but it could simply be an illustration of a scandal so obvious at the time (but now unfortunately forgotten) that it warranted no further explanation to the 11th-century viewer.

The Bayeux Tapestry is displayed on the ground floor of the Bayeux Tapestry Museum in a former seminary near Bayeux cathedral. Upstairs is a museum with movie theatre and a large plastic copy of the tapestry (mostly used for guided tours). The order in which visitors are guided to the various parts of the complex can differ on the day of visit depending on the number of people in the building. When time is limited, ask to go just to the tapestry – the audio guided tour description takes less than half an hour but it is possible to pause and rewind.

The Bayeux Tapestry is displayed in its full magnificence on the outside of a large U curve. The audio guide does a fine job of describing the various scenes and interesting features.

Photography is banned in the hall displaying the Bayeux Tapestry, which is just as well, as the full tapestry can be seen at various online sites. The most magnificent is probably the high-resolution image of the Tepetum Bagianum at the Bibliotheca Augustana. Wikipedia also has photos of each scene at Bayeux Tapestry tituli.

The museum upstairs and very interesting movie further explain events illustrated on the tapestry, techniques and materials used, and the controversies surrounding its origins, intensions, and iconography.

Amazingly, only three dyes were used to produce the ten colors used in the original embroidery: madder for red, dyer’s rocket for yellow and indigo dye for blues and greens. (More colors were added in a 19th century restoration.)

Despite the initial simple appearance of the art, the creators showed great skill in adding depth perspective and movement. The illustrations of the horses are particularly praised for its accuracy. In contrast to cartoons, and more similar to movies, the same character can appear more than once in a single scene to indicate either movement or time lapse.

In addition to the tapestry, the museum also explains life in Normandy and England during the 11th century. Dioramas and models show housing, farming, and typical village landscapes. It also explains the Domesday book.

The museum is closed over Christmas, New Year, and from around 7 to 31 January.

The Bayeux Tapestry is hugely popular making early morning visits before the arrival of bus tour parties generally the best option. When the display hall is crowded, simply pause the audio guide and let people move on – visitors may stay as long as they wish at the tapestry so there is no need to be rushed by others.

Reservations are not possible for individual visitors.

Admission tickets for the Bayeux Tapestry is €9 for adults, €4 for children, and free for under 10-year olds. The ticket includes the use of an excellent audio guide (14 languages), which explains the scenes on the Bayeux Tapestry in just over 20 minutes – pausing and rewinding is possible.

Combination tickets are available with the other two main museums in Bayeux: the Battle of Normandy Memorial Museum and the MAHB (art museum). Seeing any two museums (billets jumelés) is €12 or all three (billet triplet) €15. These combination tickets are good value but note the longer closing periods for the other two museums and that tickets must be used within 48 hours. 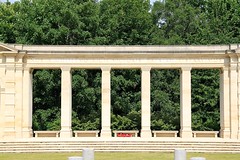 The Bayeux Tapestry is on display in the former seminary at 13 bis rue des Nesmond, a few minutes walk from the Bayeux Cathedral and around 15-minutes walk from the Battle of Normandy Memorial Museum and the Bayeux War Cemetery (British and Commonwealth) with the Bayeux Memorial bearing the message: “Nos A Gulielmo Victi Victoris Patriam Liberavimus” (“We, once conquered by William, have now set free the Conqueror’s native land”).