The Batterie allemande near Bayeux in Normandy is a well-preserved German coastal defense battery with four guns used on D-Day still in place. 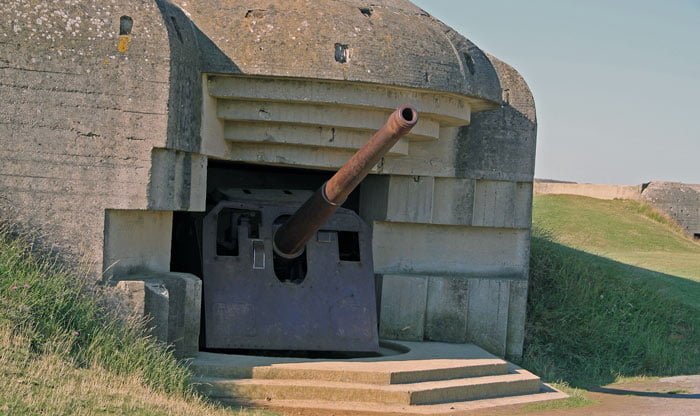 Longues-sur-Mer on the coast of Normandy near Arromanches and Bayeux has the only German coastal defense battery classified as an historic monument on the D-Day landing beaches. The British and French navies silenced the four torpedo-boat cannons but some were largely intact and remained in place. This interesting D-Day / Operation Overlord site can be visited freely. In addition to the four batteries, also see the forward position and the magnificent view of the mulberry harbor at Arromanches.

The German Battery at Longues-sur-Mer 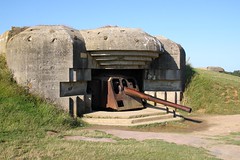 The German battery at Longues-sur-Mer was part of the Atlantic Wall constructed by the Germans to prevent, or at least hinder, the expected invasion of France by the allied forces in the mid-1940s. The battery was perfectly located to protect the Gold and Omaha landing beaches.

The German navy constructed the battery as a Marineküstenbatterie (MKB) or naval coastal battery. It consisted of four casemates, a forward command post and further smaller land and aerial defensive bunkers. 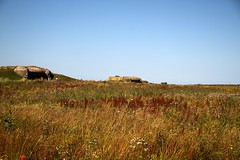 This Wiederstandnest (WN) Number 48 (literally, Resistance Nest) was completed in April 1944, less than three months before D-Day. It was manned by around 180 German soldiers. 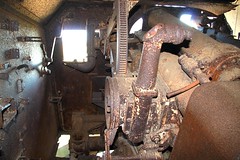 In the week prior to D-Day, the allies dropped well over 1,500 bombs on the German battery at Longues-sur-Mer (many, if not most, missed the actual site). The night before D-Day, 604 tons of bombs were dropped on the site but the thick armor-plated concrete withstood the onslaught. However, the underground wire communication links were damaged, which limited the effectiveness of the battery.

On D-Day – June 6, 1944 – the battery came under fire from HMS Ajax at 5h30. The German guns were silenced at 8h45 by two direct hits through the embrasures delivered from HMS Ajax. Further direct hits were credited to HMS Argonaught. In total, the German battery took 179 shells from these allied cruisers on the morning of D-Day.

Repairs allowed the German battery to fire again intermittently by late morning. The guns were finally silenced by the French cruiser FFL Geroges Leygues and also took hits from the USS Arkansas. Late afternoon, the fourth battery, which did not receive a direct hit, opened fire again, while the Soviet 122 mm gun also fired towards Omaha.

In total, 115 shots were fired from the German battery at Longues-sur-Mer on D-Day but without causing serious damage to allied ships. Both the French and British claimed the honor of silencing the guns.

The troop manning the German battery surrendered without significant resistance on the morning of June 7, 1944, to the Second Devonshire Regiment that had landed at Gold Beach. Of the 184 German soldiers stationed here, 120 survived – more than half were over-40 years old.

Visiting the German Battery at Longues-sur-Mer 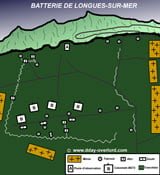 From the parking area, it is a short walk to the four casemates with the original German cannons still in place. The French army was apparently planning to use some again (if not necessarily pointed towards England), but the technology was already considered out of date before they could be salvaged.

Visitors may freely roam the terrain and explore the casemates with ammunition stores and accommodation. Note the ventilation system directly behind the guns – this was necessary to release air pressure after firing the cannons. 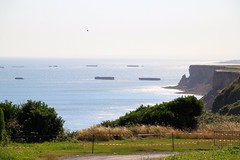 A prepared trail leads from halfway between the four casemates towards the forward position on the cliff edge. This outpost, halfway between Omaha and Gold Beach, gave commanders a perfect view of the Atlantic. Visitors may explore the outpost at will. This outpost featured in The Longest Day, although not in its original role.

From here, rather than retracing back to the casemates, go further down the coast towards another small parking area. From here, it is possible to see the remaining mulberries at Arromanches. The coastal road from here is often closed due to landslides – a road lead down to the beach while the inland road goes back to the parking lot at the information center.

Signposting at the site is a bit limited but most visitors probably won’t need much more information, especially if visiting other D-Day sights in the region.

The German Battery (Batterie allemande) at Longues-sur-Mer is around 10 km directly north of Bayeux, just off the main coastal road, roughly halfway between Arromanches and the American Military Cemetery at Colleville. Signposting is clear.

The German battery is best reached by car or on bicycle – public transportation options are very limited. Alternatively, the battery is often included on day-trip minibus tours of D-Day landing beaches and sights. Get Your Guide can give some indication of prices but do compare different service providers – not only to compare prices but also to ensure the tour include the number of sights or desired depth of coverage.

The information center at the parking lot offers guided tours daily in summer and on weekends from April to October.

Visiting the German battery at Longues-sur-Mer fits in well with visits to Bayeux, Arromanches, the Normandy American Military Cemetery at Colleville-sur-Mer, and the landing beaches of Omaha and Gold. As the sight is always open, it is a good stop early morning or late afternoon when other sites may be closed.

A similar German battery and casemates can be seen at Pointe du Hoc – a site famously taken on D-Day by the Rangers. Here, visitors can still see the pockmarks left in the landscape by the Allied bombardment.