The white cliffs and three natural rock arches of Etretat are some of the best-known sights in Upper Normandy in France and a popular day-trip destination. 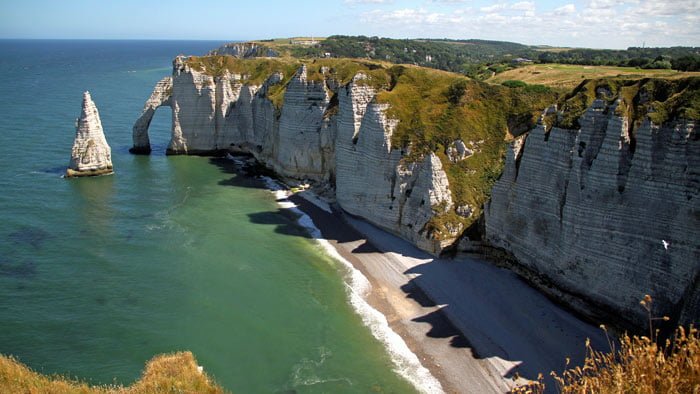 Etretat is famous for its three natural arches and white chalk cliffs that tower high over the Atlantic Ocean. These natural wonders are freely accessible, as is the white pebble beach. Claude Monet and other Impressionists famously painted the arches and cliffs in the nineteenth century. An Arsène Lupin story was based here while Guy du Maupassant spent most of this childhood in the town. The old town center is fairly pretty too making Etretat a popular day-trip destination from other towns and sights in Normandy.

The White Cliffs and Arches of Etretat 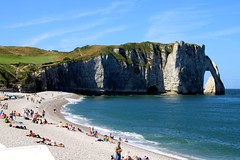 The coastal resort town Etretat on the English Channel in the Seine-Maritime Department of Haute Normandie (Upper Normandy) is famous for the two natural arches that can be seen from the oceanfront boardwalk and white shingle beach.

The cliffs of Etretat are easily scaled via steep paths – as it is a natural site safety railings are far and few between and care should be taken especially when traveling with small children. (Although it seems young adults tend to take the most ridiculous risks here.) 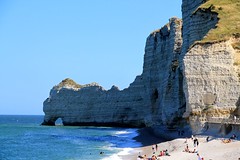 From the beach and boardwalk in Etretat white cliffs and two natural arches can be seen without requiring any effort from visitors – the third and largest arch cannot be seen from the town. To the southwest (left when facing the sea) are the Falaise Aval and Aiguille (and further on the larger Manneporte arch) and to the northeast (right) the Falaise Amont. These natural arches were originally formed by an underground river running parallel to the present coastline but the sea has further enlarge them. 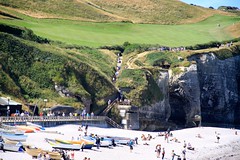 The path and steps to the top of the rocks lead directly from either end of the boardwalk. The views from either end are magnificent but Falaise Aval with the further sights of the needle and the third arch are the more popular.

No toilets or water are available once away from the beachfront. “Doing” the rocks require about an hour for each side. Sturdy footwear is advisable but not essential. 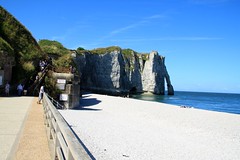 Visitors can either scale Falaise Aval or walk through the arch at low tide. Do note the warnings posted – only set out at least four hours before high tide or the return route will be flooded. This requires a six-hour wait or a very expensive boat ride if help is called.

More popular, and safer, is to scale the rock via the designated path. From the German Second World War bunker, the route leads up to the top of the white chalk cliffs. Visitors can enjoy magnificent views of the ocean, cliffs, Etretat and beach, as well as the Falaise Amont on the opposite end of the town. (The parking lot at the top of this rock can be annoying empty even on a busy day.) 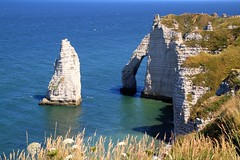 Behind the arch at Falaise Aval is the 77-m high Aiguille needle rock. According to various stories and legends, including an Arsène Lupin story (“The Hollow Needle” / “L’Aiguille Creuse”), a treasure was hidden here. A secret passage should have led into the needle. Historical photos show that the needle has lost some of its height to the elements in the last century or so. 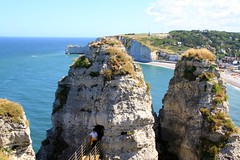 Walkways and safety railings make it possible to enter some hollow parts of the rock. However, most of the site is not fenced off and it is long fall to a fairly certain death for whoever goes over the edge. 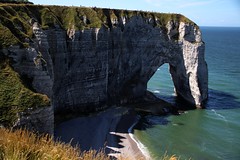 Further to the southwest is the Manneporte, which Maupassant famously described as an elephant dunking its trunk into the ocean. This is the largest of the three arches at Etretat. En route it is also possible to see in the sea the remains of 18th-century oyster beds.

There is little point in hiking much beyond the Manneporte arch, as the best way back to the town is to retrace the route. The golf course adjacent to the cliffs is strictly off-limits to casual hikers. It is possible to hike around the golf course but the prettier route is definitely next to the sea.

Falaise Amont and Arch at Etretat 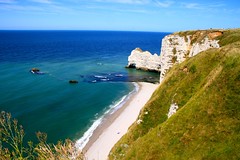 The stairs and path leading to the top of Falaise Amont seem a bit steeper, especially nearer to the town. However, as at Falaise Aval, once up the landscape is fairly flat. From here, visitors can enjoy similar views as from the opposite end of town but of course without the benefit of seeing a third arch. 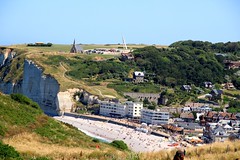 The Chapelle Notre Dame de la Garde keeps guard over the rocks here but the chapel is not particularly noteworthy close up. Also very prominent is the white arrow-like monument Nungesser et Coli with a stone airplane. This monument and a small museum are dedicated to these two French pilots, who attempted the first non-stop flight from Paris to New York in 1927. Their plane L’Oiseau Blanc (White Bird) was last seen leaving France over Etretat and presumably crashed somewhere in the Atlantic Ocean. 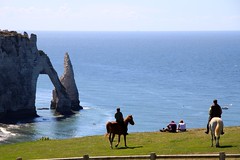 It is possible to drive up to Falaise Amont. The road is narrow and long sections single lane with blind corners – drivers traveling in the direction of the red arrow should give way, or reverse.

Etretat offers all the entertainment and trappings of a typical French and Normandy coastal resort. The old town has some fine and ugly buildings – often side-by-side and some lovely half-timbered buildings adorned by neon signs. 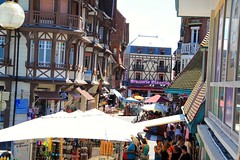 Many restaurants and tourists shops offer all demanded by day-trippers and holidaymakers at a coastal resort. Prices can be closer to Parisian levels than rural Normandy on all items including food and drink. A casino right on the beach is open daily from 10 am to 3 am. 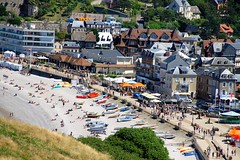 The covered market (Marché Couvert) is a reconstruction and now mostly used by shops aiming squarely at the tourism market. Further inland is the Église Notre Dame, a 12th-century Romanesque church (but the tympanum is from the 19th century). The nearby station is now only used for tourist bicycle-train (velo-rail) excursions. The Clos Arsène Lupin is for fans of Maurice Leblanc only. 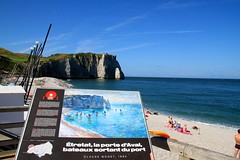 The beach at Etretat is freely accessible to all. As in the times of the Impressionists, boating and other water activities are still popular with equipment on rent at the beach.

Getting to Etretat is easiest by car but a bus service is also available to Le Havre with good railway connections to Paris and Rouen. Flixbus has seasonal direct buses from Paris to Etretat.