Châteaux along the Loire are among the top sights to see in France. Chambord, Cheverny, and Chenonceau palace can be seen on a day trip from Paris but staying in the Loire Valley is rewarding too.

The châteaux in the Loire Valley to the southwest of Paris are amongst the most popular sights to see when visiting France. This region is famous for its wine, fine food, and numerous châteaux associated with royalty and high nobles during the Middle Ages and Renaissance period. Loire Valley chateaux often combine elements from castles, palaces, and manor homes into stately country residences. Many date at least partly from the Renaissance when development in weapons meant thick walls were no longer impregnable to cannonballs. Castles had little strategic value and many were converted into comfortable and less drafty palaces. These mansions popular with the French nobility during especially the 16th century are now amongst the most popular tourist attractions in France. 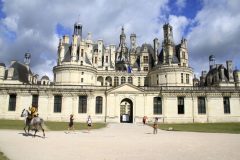 Château Chambord is by far the largest palace in the Loire Valley. Chambord was built during the early sixteenth century by King Frances I as is clear from the liberal use of his fire-breathing salamander emblem in the decorations. It appears over 700 times. Chambord was only completed in 1685 by Louis XIV, the Sun King, more famous for his lavish Palace of Versailles – now a popular day-trip destination from Paris.

Only 80 of Château de Chambord’s 440 rooms are open to the public. If time is limited, give preference to the museum on the second floor but do not miss the roof terraces with views not only of the palace grounds but also the forest of 365 chimneys and other roof adornments.

Château Cheverny was one of the last and most elegant châteaux built in the Loire Valley (completed in 1634). Cheverny survived the French Revolution and is still owned by the original owners – the Hurault family – who kept the lavishly furnished rooms intact.

Cheverny is derived from French terms for hunting, an activity popular for centuries with the French nobility. Cheverny’s trophy room has over 2,000 pairs of deer antlers while the kennels have around 60 hunting dogs that are fed at 5 pm. 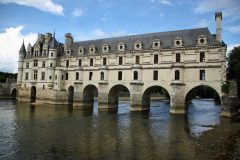 Château Chenonceau is the most romantic château in the Loire Valley. It is Renaissance and rather uniquely, most of it was designed by women. Chenonceau’s most famous inhabitants were Diane de Poitiers – mistress of King Henry II – and his wife, Catherine de Medici.

Henry II gave Diane de Poitiers the original small palace built in the Cher River. Diane added a 60-m (200-ft) arched bridge across the river and the formal gardens to the north of the palace. After Henry’s death in a jousting tournament in 1559, Catherine had Diane unceremoniously removed to Chaumont and moved into Château Chenonceau herself.

Catherine de Medici added a three-story gallery to Diane’s bridge as well as the lovely Renaissance garden to the south of the palace. However, Catherine never got around to build a planned second palace at the far end of the river. Catherine outlived Henry by three decades and hosted lavish receptions and balls (sometimes in fantasy or cross-dress) where she employed beautiful young female spies to keep her abreast of political gossip.

Transportation to Chateaux in the Loire Valley

Although public transportation to and in the Loire Valley is well developed, a car does make getting around much easier. Most Loire châteaux can be reached by rail or bus but double-check schedules as services can be limited to a few times per day. Drivers may find staying in smaller towns and country estates more pleasant (and cheaper than larger cities). Cycling is also a sensible option as distances are relatively short.

Frequent trains from Paris take just over an hour to the Loire:

The local train from Tours to Orleans takes around 90 minutes and stops en route in Amboise (20 minutes) and in Blois (a further 20minutes).

If visiting the Loire Valley on a day trip from Paris, it is best to take a guided bus tour that includes visits to three or four châteaux – it will be exhausting but ultimately worth it.