Royal Chambord Castle is the largest and one of the most popular Renaissance chateaux to see on day trips in the Loire Valley in France. 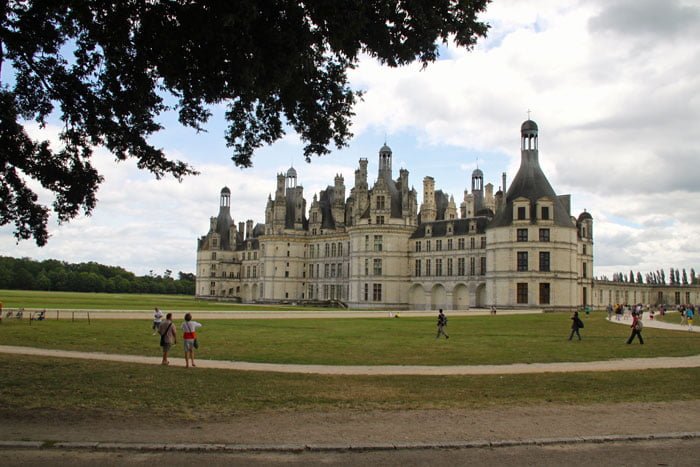 Originally intended as a hunting lodge for the royal court, Chateau de Chambord ballooned into the largest chateau in the Loire Valley. This Renaissance chateau is instantly recognizable by its busy roofline that resembles the skyline of a medieval city. A few rooms are furnished but the main reason to visit is to see the magnificent architecture of Chambord. As a nationally owned monument, children and young people enter for free. Chambord is hugely popular with day-trippers and a firm favorite with Loire chateaux excursions from Paris. 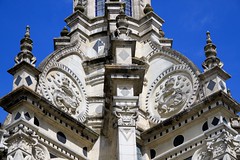 French King Francis I started the construction of Chambord castle in 1519 as a hunting lodge for the royal court. However, even though never completed, Chambord developed into the largest chateau in the Loire Valley with over 400 rooms and near 300 fireplaces.

Many further French kings used Chambord for hunting parties but the castle was rarely occupied continuously. Furniture was only installed for the duration of the royal visit.

During the 18th century, Chambord castle was occupied for a record 12 years. Many of the furniture on display and the present state of the building date from this era.

The main attraction of visiting Château de Chambord is the magnificent castle. It is the largest chateau in the Loire valley and architecturally very impressive. The estate is interesting too but as a hunting lodge, it does not have a formal garden. 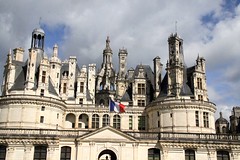 The dimensions of Château de Chambord are impressive – the castle is 156 m long and up to 56 m tall. Depending on who is counting, the castle has 426 rooms, 282 fireplaces and 77 staircases.

The main architectural features of Chambord are a typically French medieval square keep with four huge round bastion towers in each corner, two further wings and all enclosed by curtain walls. Despite the medieval foundations, Chambord never had any defensive structures and the execution is Renaissance in style. 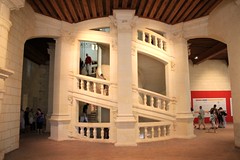 Visitors can see most of the three floors of the keep, a floor or two of some of the round bastions, and best of all the terrace with the magnificent forest of chimneys and turrets. This close-up view of Renaissance architecture is even more interesting than the oft magnificent views of the large hunting estate.

Visiting the Château de Chambord is less of an ordeal than the numbers may suggest. The place is massive allowing huge numbers of visitors to easily move through. Furthermore, there is no fixed route and as many rooms are unfurnished or contain no specifically important sights it is easy to simply pass over crowded spaces, or visit rooms filled with a tour group a few minutes later. 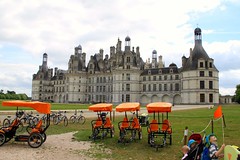 The estate (domaine) of Chambord covers a mostly forested 5440 hectares. It is surrounded by a 32-km long wall with the enclosed area roughly the same size as central Paris.

In contrasts to the absolutist ancien regime days prior to the French Revolution, only around 15% and not all of the wall-enclosed Domaine national de Chambord is closed to the public. The remaining 800 hectares are sufficiently large to explore on hiking, cycling, or horse-riding trips.

Activities in the domaine include:

Bicycles and boat rentals are available at the chateau from April to September. Cycling is only allowed on paved roads and marked cycling paths. Free bicycle parking is available to the far right when facing the main entrance of the chateau. 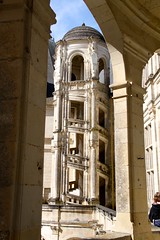 Château de Chambord is open every day, year round except December 25 and January 1.

Opening hours are 10 am to 5 pm from October to March and 9 am to 6 pm from April to September.

Admission to Chambord Castle is €11 for adults, free for children under 18 (and European Union residents up to 25). Guided tours and audio tours are optional. Reservations are not possible (except for guided tours).

Admission is only charged for the chateau building itself – the park may be entered for free.

Chateau de Chambord is in the French Loire Valley not far from Blois. Getting to Chambord is easiest by car.

During summer, public transportation is available but complicated and limited. A better option for non-drivers may be a day-trip excursion from Paris or larger Loire towns. Chambord is included in most chateaux tours from Paris.