Chateau de Valencay in Berry near the Loire was the home of Talleyrand and served as state guesthouse during the reign of Napoleon Bonaparte.

Chateau de Valencay is an impressive palace with marvelous formal gardens, a large nature park, a maze, animals, and play areas for children. Valencay served as state guesthouse during the times of Napoleon Bonaparte and was the country home of Talleyrand. The easy to enjoy chateau interior with Empire and Regency furniture has the original table from the Congress of Vienna. Chateau de Valencay, in the historic province Berry – now Indre – is a great stop when traveling between the Loire Valley and Bourges in France Centre. Valencay is best reached by car. 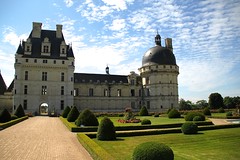 The oldest parts of Château de Valençay are the keep, south wing, and large round tower constructed in the mid-16th century by Jacques d’Estampes to replace an older fortress. The basic design was inspired by Chateau de Chambord with clear Renaissance elements including sculpted columns, dormers, ornamental machicolations and a total lack of medieval defensive structures.

The Renaissance chateau was altered and added to throughout the centuries. The present west wing (housing most of the museum) that overlooks the garden and a second large round tower were added in the seventeenth century. This wing is a more classical French style with a mansard roof with alternating oeil-de-boeuf and skylight windows.

The theater, also in magnificent Empire style, was added on the insistence of Napoleon to entertain the Spanish royal family imprisoned here in the early nineteenth century.

The present estate of Valencay is a 53-hectare park consisting of formal gardens near the chateau and a forested area, open to the public, at the periphery. Domestic and some exotic animals can be seen.

The most famous owner of Château de Valençay was Charles Maurice de Talleyrand-Périgord (1754-1838). Encouraged by Napoleon he obtained Valencay in 1803 and used it until his death. 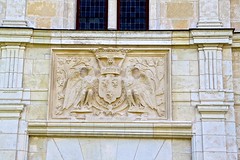 Talleyrand was one of the most interesting figures from the late eighteenth, early nineteenth century – a period not devoid of colorful characters. He not only managed to keep his head attached but also served with distinction in high office (amongst others bishop, foreign minister, and ambassador) during the reign of Louis XVI, the Revolution, Napoleon and the Restoration. It is debatable whether he was the perfect diplomat or ultimate traitor – either way he acted with great skill and probably served France rather than any specific regime. (Financially, he did very well for himself too.)

See Talleyrand’s Wikipedia entry for an easy to read record of his remarkable life.

Talleyrand improved Château de Valençay to use not only as his residence but also as a guesthouse to receive important visitors of the French empire. Valencay now is much as it was in the time of Talleyrand – note the Talleyrand-Perigord coat of arms over the main entrance of the keep.

To Talleyrand’s annoyance – he fell out with Napoleon around 1807 – he was forced to host the Spanish court at Valencay for six years. The Treaty of Valencay (1813) allowed King Ferdinand VII to return to Spain. Talleyrand made a concerted effort to eradicate all signs of Spanish influences.

During the Second World War, items from the Louvre, including Venus de Milo, was kept in Château de Valençay. After an incident where the Resistance killed German soldiers in the region, the chateau escaped destruction only because the Talleyrand-Perigord family also held the nominal title of Sagan, a historic duchy in Prussian Silesia.

The Talleyrand-Perigord family died out in the second half of the twentieth century. Today Château de Valençay is the property of the Department l’Indre and the commune Valencay.

Château de Valençay is a magnificent site to visit. A small part of the 100-room chateau is open to visitors and furnished as in the time of Talleyrand. Several formal gardens invite leisurely strolling while the larger forested estate can be explored on foot or on electric golf carts.
Visitors approach the donjon of the Château de Valençay through the formal French gardens. The keep with side wings are the oldest part of the Renaissance palace, however, note the addition of the coat of arms of Talleyrand-Périgord above the entrance gate of the keep. Go up the stairs in the keep to see the small Sagan Gallery before returning to the main courtyard.

From the main courtyard enjoy the views before entering the west wing, the only part of the chateau open to visitors. Free audio guides are available for what used to be called the Talleyrand Museum as the chateau is furnished with Empire, Regency and Louis XVI period and original furniture from the time of Talleyrand. 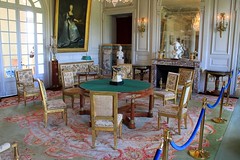 The single most important item is the round table in the Grand Salon. It is claimed that this is the table used at the Congress of Vienna (1814-15) where the fate of much of Europe was decided after the fall of Napoleon. The table is surprisingly small but then again only Britain, Prussia, Russia, an Austria were supposed to have sat at it. Talleyrand changed all of that. He excelled at the congress arranging a superb deal for France in 1814. Although Napoleon ruined much of it through his “100 days” and Waterloo, Talleyrand still managed to secure exceptionally lenient terms for France in 1815.

Other rooms include Talleyrand’s bed and desk, a room furnished in the style preferred by the Spanish King Ferdinand VII, the bedroom of Madame De Stael, and period musical instruments. A long gallery on the second floor has paintings of the Talleyrand-Perigord family. 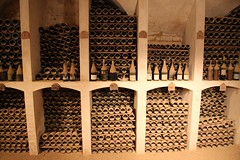 The cellars with kitchen and very dusty wine bottles are entered via an external staircase from the main courtyard.

The extensive park can be explored on foot or on electric golf carts (€12 / 30 min). Elements in the forested estate include a still working underground icebox where ice from the pond was kept for use in summer, a small farm with animals, a deer park, and a picnic area with playground. The Napoleon maze, made with modern wood fencing, is fairly challenging. 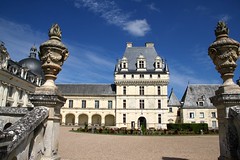 Château de Valencay is open daily from mid-March to mid-November. Opening hours vary but are as a minimum 10:30 to 17:30.

Nighttime visit are €16, or €22 if visiting to the chateau during the day as well.

Combination tickets are €16 (€11.50 reduced) for Château de Valençay and the nearby Motoring Museum. 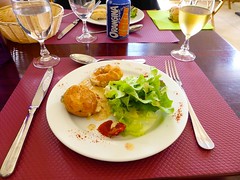 Special events, which may require reservations and additional fees, include concerts, cooking demonstrations, candlelight visits, and guided tours of the Petit Theatre.

The Orangerie restaurant serves very pleasant lunches and snacks. AOC Valencay wine is available by the glass. A dedicated picnic area is located next to the maze and playground. Many further restaurants and bakeries are in the town Valencay directly next to the chateau.

Getting to Château de Valençay is easiest by car. Valencay can be reached by train but it is on a minor line and too time consuming.

The closest Autoroute exits are Salles-sur-Cher on the A85 or Vatan on the A20 – from either it is around a 20 km drive on well-maintained country roads to Château de Valençay. 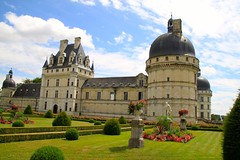 Distances to Château de Valençay from other cities are around: 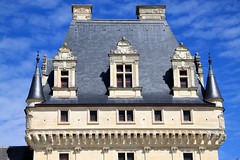 Driving times from Château de Valençay to some other chateaux in the region are:

Free parking is available in the town or at the chateau parking area.

The somewhat isolated location often leaves Château de Valençay agreeably quiet even during summer weekends when many other Loire chateaux can become unpleasantly busy. Château de Valençay is a great place to stop when traveling from the more famous chateaux in the Loire Valley to the historic city Bourges and other destinations in the région Centre of France.