Langres is a beautiful wall-enclosed fortified town on a promontory in the Marne Valley on the edge of the Champagne-Ardenne and Burgundy regions in eastern France.

The fortified, wall-enclosed town Langres is pleasant day-trip destination or stopover when traveling in the Champagne-Ardenne and Burgundy regions in France. This small town on a promontory in the Marne Valley was long a military stronghold and its bastions, ramparts, and watchtowers are the main attractions. The local tourist office loves to point out that Langres is included in the Selection du Reader’s Digest list of the top 50 most beautiful towns in France.

During pre-Roman times, Langres served as one of the Gallic capitals of Burgundy. Although a few Gallo-Roman monuments survived to the present, the top sights in Langres are more recent.

After Champagne became part of France in 1284, Langres became a royal stronghold. As a fortified town, this promontory was encircled by strong walls and bastions that were maintained for military purposes well into the nineteenth century. Langres largely escaped war damage and thus has an authentic old town with centuries-old buildings.

The Battlements and Ramparts of Langres, France 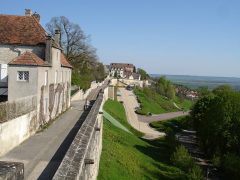 The main attractions of Langres are the bastions and fortifications surrounding the old town. Following the roads inside the walls, a walk around the town is just over 3.5 km (2.2 miles). En route, visitors pass by town gates and watch towers while enjoying marvelous views of the beautiful countryside, the Marne Valley, several small lakes, and occasionally even the Vosges Mountains. It is an easy walk as the road is paved and reasonably flat.

Seven gates and seven towers survived with the bastions and ramparts in Langres. The Gallo-Roman arch dates from the first century and although used as a gate up to medieval times, this arch is now blocked and integrated into the walls near the Hôtel de Ville.

The Tour Navarre is architecturally important – this round Renaissance tower is the only one of its kind that survived in all of France. It is 20 m (66 ft) high with a diameter of 30 m (100 ft). Some of its walls are seven meter (23 ft) thick. The Tour Navarre houses a small museum (small charge) and is particularly worth visiting to see the intricate rafters.

Many of the old town buildings look as if they have not been touched in centuries. In contrast to say nearby Troyes or wall-encircled Rothenburg ob der Tauber in Germany, Langres was primarily a military stronghold and not a wealthy market town with resulting impressive secular buildings. Many buildings in Langres are undeniably old but not necessarily of great real architectural value.

The most interesting building in the old town is the Cathédrale St Mammès. This twelfth century cathedral has Burgundian-Romanesque origins combined with some early-Gothic elements. The western façade is an eighteenth century addition. It is worth climbing the 227 steps of the 45 m (150 ft) high south tower (small charge) for superb views of Langres town and countryside.

Other noteworthy buildings in Langres include the Renaissance House with an impressive decorated façade, the Theater inside a seventeenth-century chapel, and the Eglis St Martin church.

Denis Diderot was an important French philosopher during the Age of Enlightenment and a major force behind the creation of Encyclopédie. Diderot is remembered in Langres amongst others by a statue on Place Diderot, at the top end of Rue Diderot, a few paces from the Collège Diderot, and through a special exhibition in the local history museum.

Jeanne Mance, as missionary and nurse, was a co-founder of Montreal in Canada. She is remembered in Langres by a statue on Place Jeanne Mance in front of the cathedral.

Transportation to Langres in Champagne-Ardenne

Getting to Langres is the easiest when traveling by private car. When approaching Langres from the north, i.e. on the A5 (Troyes, Paris, Reims) or the A31 (Nancy, Metz, Luxembourg) use exit 7 (Langres-Nord). When arriving from the south (Dijon), use exit 6 (Langres-Sud) on the A31. In either case, Langres is only a few minutes’ drive from the high way. 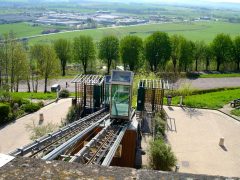 Visitors to Langres will appreciate the total absence of nickel and diming in this town. Plentiful free parking is available for cars and RVs at the south of the old town at Place Bel’Air close to the very helpful Langres Tourist Information Office, which hands out gratis 3D-type maps that would do any glossy guidebook proud. Alternatively, park at Panoramics at the east of Langres and use the free funicular to reach the old town.

Langres is a great day-trip destination from larger town in the region such as Troyes, Dijon, Nancy, and Metz. Being only minutes from the Autoroute A31, Langres also makes for a pleasant break when traveling from the north of France, Belgium, or Luxembourg towards Provence. (F130501)