Crest Castle in the Drôme Valley has the highest medieval castle keep in France. Visitors use stairs to the top of the tower but abseiling the donjon is a faster way down. 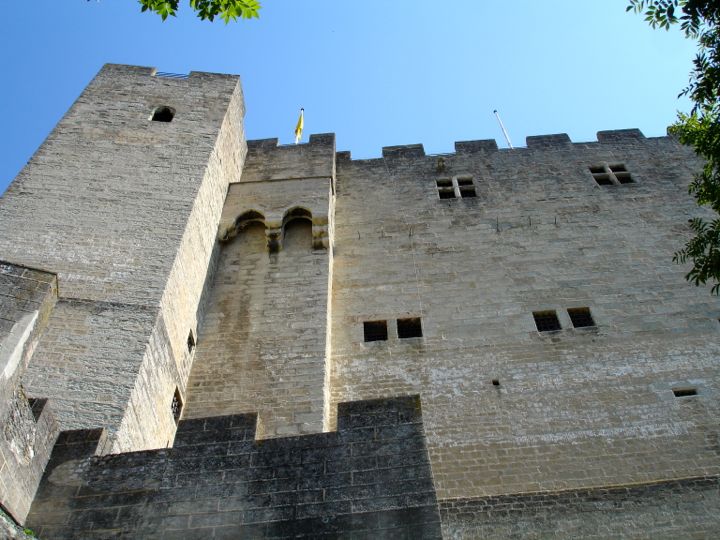 The medieval donjon of Chateau de Crest in the Drôme Valley is the highest surviving keep in France. This 52-m high castle tower can be scaled via staircases for great views of Crest and the Drôme River. On summer weekends it is possible to abseil from the top. As only the keep survived from the original huge fortress, the building is referred to as La Tour de Crest (tower) rather than Château de Crest (castle). Crest is in the Drôme Valley and a great day-trip from Grenoble, Valence, Chambéry, and French Alpine ski resorts.

The Drôme Valley has been of strategic importance for centuries due to trade routes from southern France to Italy through the Alps. These routes were defended even in pre-Roman times but the origins of the castle in Crest are mostly traced back only to a written reference in a papal letter of 1120. The castle was built in several stages and a massive fortress was already in place by 1419 when Château de Crest became a royal property.

During the seventeenth century, French King Louis XIII and his chancellor Cardinal Richelieu gave orders that the castle in Crest, like many others in France, had to be demolished. Destruction started in 1633 and only the keep, which served as jail up to 1873, survived. The jail in Crest saw service during the French wars of religion and famously held Republican prisoners who opposed the imperial rule of Emperor Napoleon III in the nineteenth century.

Today, only the marvelous keep of Crest Castle survived. The tower is 52 m high, 32 m long and 20 m wide. It is the highest surviving donjon in France – if cellars and subterranean construction are measured too, the Château de Vincennes outside Paris is higher at 66 m.

From a distance, the donjon of Crest oddly resembles a misplaced medieval skyscraper standing a bit alone and forlorn on a small hill above the town Crest and the Drôme River. Up close, the medieval tower looks the part with walls up to 4 m thick and without unnecessary decorative elements.

Inside the Crest castle tower is rather bare making it easy to enjoy the visit even with small children in tow. The purpose of some rooms is explained but the number of items exhibited is limited and not particular important. Some graffiti by prisoners survived too. Scale models helpfully demonstrate the development of the castle as well as some architectural elements of medieval castle construction in general.

The most fun is scaling the steep stairs to the top of the castle. Note the thick wooden beams – sometimes cut into triangles to save wood. The wooden stairs up to the third level, where the living quarters were, are wide but from here upwards, mostly very narrow, one-way stone staircases are used. 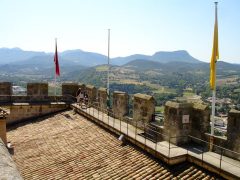 From the main bedroom with two-seater toilet facilities – formerly popular for social interaction – take the narrow staircases to the roof with an ingenious water catching system. From here, external staircases lead to the top of the donjon and marvelous views of Crest, the Drôme Valley, and mountain peaks. Although not as dry as the Ardèche and Provencal landscapes further to the south, the Drôme Valley is clearly warmer and drier than the Isère Valley, one mountain range further to the north.

La Tour de Crest is open daily, except Tuesdays, from April to end October from 2 to 6 pm. From May to September, the tower is open daily from 10 am to 7 pm. The rest of the year, the keep is generally open in the afternoons during local school holidays. Last tickets are sold an hour before closing time. 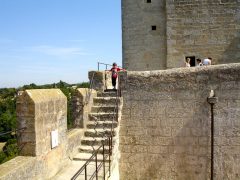 Visiting the tower involve a huge number of stairs right from the start making touring the castle totally impossible for wheelchair users and the infirm.

Individuals can abseil from the top of the donjon on Saturday afternoons in July and August. For groups, abseiling from La Tour de Crest is possible any day by prior reservation. The minimum age for abseiling from Crest Tower is eight years.

Parking is available at the back of the castle – follow the signs to La Tour de Crest from the town center through the suburbs. Hikers can follow more direct trails from the old town.

Crest and the Drôme Valley form a great day trip from other centers such as Grenoble, Chambéry, Valence, and ski resorts in the French Alps. A spectacular approach to the Drôme Valley is along the meandering pass road from the Col de Rousset in the Vercors Massif between Grenoble and Die. (F130501)