Air Berlin, OLT, and charter airlines have cheap tickets and low fares on European flights from Cologne and Munich to Rostock Airport (RLG) on the Baltic Sea coast of Northern Germany. 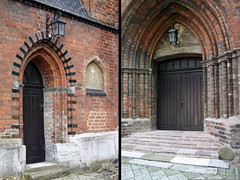 Rostock-Laage Airport (RLG)  is a small regional airport around 30 km (20 miles) south of the Baltic Sea port Rostock. Low-cost airlines Air Berlin, Germanwings, regional airline OLT, and charters have flights to Rostock from mostly holiday destinations in southern Europe. Many flights are only operated on a seasonal basis.

Germanwings flies from Rostock-Laage (RLG) to its hubs at Cologne/Köln-Bonn Airport (CGN) and Stuttgart (STR). Germanwings offers guaranteed connections through Köln-Bonn and Stuttgart to several further destinations in Europe.

Getting to Rostock Airport in Northern Germany

Buses provide the best public transportation option for travelers to Rostock Airport. Trains do not run to the airport itself with the closest railway stations being Rostock (30 km), Güstrow (20 km) und Laage (10 km). Taxis from Rostock to the Airport is around €50 and takes just over half an hour.

Joost’s Ostsee Express offer some shuttle bus services to many popular Baltic Sea resorts that are timed according to some flight movements from Rostock Airport. Reservations are generally essential.

By car, use autobahn A19 (Rostock to Berlin), exit Laage. Autobahn A20, which is convenient for connections to all Baltic towns from Lübeck to Stralsund, crosses the A19 between the airport and Rostock.