Travelers on the German Fairy Tales Road (Deutsche Märchenstraße) from Hanau to Bremen can see top sights associated with the folktales told by the Brothers Grimm. 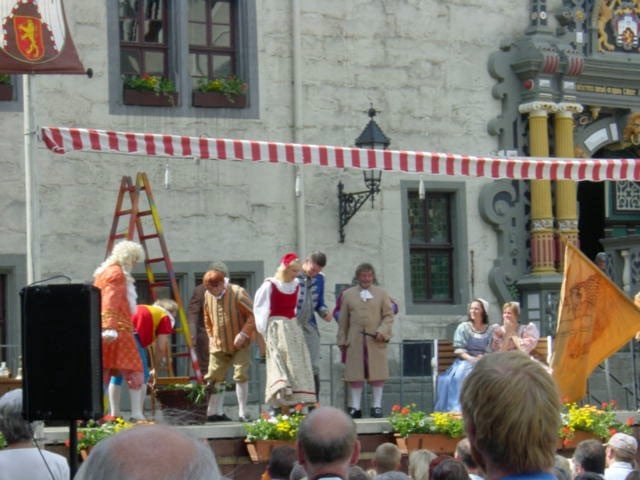 Like the original fairy tales collection of the Brothers Grimm (Die Gebrüder Grimm), the Fairy Tales Road is not primarily aimed at children. However, many sights associated with the fairy tales offer performances and exhibitions on the folk tales that will enchant children of all ages. Visitors pass through Little Red Riding Hood country, may sleep in the castle of Sleeping Beauty, see rats while walking the streets of Hamelin, and head towards Bremen like the Town Musicians.

The German Fairy Tales Road (Deutsche Märchenstraße) is around 600 km (370 mi) long and follows back roads from central Germany to the North Sea. The official start of the Fairy Tales Road is in Hanau, where the Brothers Grimm were born, near Frankfurt am Main and the end is at Bremen.

No public transportation follows the whole Fairy Tales Road but many towns can be reached by train or bus. Long sections of the road follow the Weser River, which is open to boating and canoeing, while cycling and hiking are also popular options. However, on the whole, a car does make traveling the Fairy Tales Road easier and allows travelers to see more sights within a short period.

Over 50 towns and sites are official members of the Deutsche Märchenstraße. Some of the highlights along this holiday route include:

Germany’s most famous holiday theme route is the Romantic Road (Romantische Straße) in Bavaria. However, the sights on the German Fairy Tales Road (Deutsche Märchenstraße) are any time just as romantic. Travelers, especially drivers, can easily combine sights on both roads – Würzburg, the start of the Romantic Road, is only 100 km (60 mi) southeast of Hanau. The German Fairy Tales Road (Deutsche Märchenstraße) and Romantic Road (Romantische Straße) combined will take travelers north-south through the full length of Germany from the North Sea to the Bavarian Alps.