Getting to the archaeological site of Pompeii by public transportation (very cheap trains) or car is easy while many guided day-trip tour buses arrive from Naples, Sorrento and Rome. 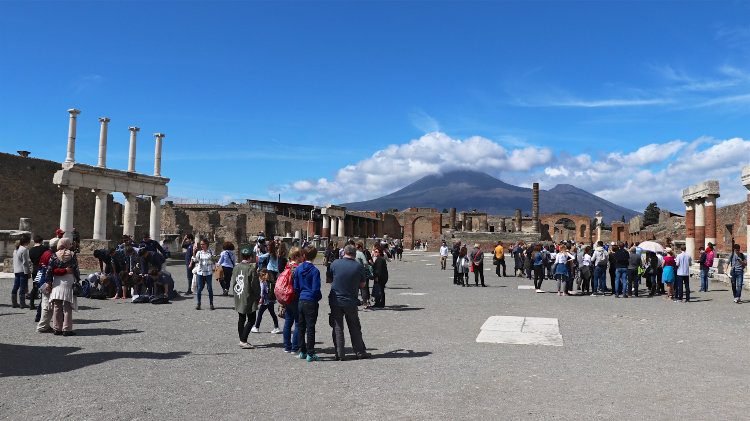 Getting to the excavations of Pompeii (Scavi di Pompei) by public transportation is easy, fast, and cheap from Naples or Sorrento. The archaeological site with the excavations of Pompeii is famously at the foot of Mount Vesuvius just to the south of Naples in Italy. This hugely popular historical Roman sight is easily reached by train from Naples downtown and Sorrento, bus and train from Naples Airport, or on day-trips from many parts of Italy, including as far away as Rome and Florence.

Driving to the Excavations of Pompeii

The archaeological site of the Pompeii excavations is easily reached by car due to its location very close to the E45 (A3) highway. The Porta Marina main entrance to Pompeii is less than a kilometer off the Pompei exit on the E45 highway to the south of Naples. Driving time from Naples Airport or downtown Naples could be as quick as 30 minutes but traffic is likely to slow drivers down.

Camping Zeus, just past the Porta Marina entrance, has a popular parking lot for safe parking. Prices are around €2.50 per hour, or up to €10 per day – money well spent even for old or fully insured cars.

Pompeii is the Latin spelling usually used for the archaeological site in English – Pompei is used in Italian for both the excavations (scavi) and the modern town.

By Train to The Excavations of Pompeii

Trains are generally the easiest and cheapest way to reach the excavations of Pompeii on public transportation. Buses are available too but are more cumbersome and offer no price or time advantage. 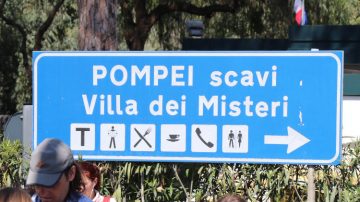 Pompei has several train stations: for most travelers to the excavations of Pompeii, the most convenient station is Pompei Scavi – Villa dei Misteri station, which is directly at the Porta Marina main entrance to the archaeological site. This is the station used by the Circumvesuviana commuter trains.

Pompei station on the main line is less convenient. It is around a ten-minute walk from the Piazza Amfiteatro entrance to the Pompeii excavations. Avoid using any other stations with Pompei in the name. 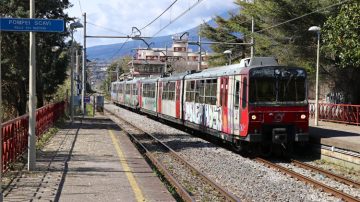 The Circumvesuviana train is for most travelers the easiest public transportation option to reach the excavations at Pompeii from Naples or Sorrento, and any other destination that requires transfers in either town. These local commuter trains connect Naples and Sorrento via amongst others Ercolano Scavi (Herculaneum) and Pompei Scavi twice per hour from early morning to late night.

Pompei Scavi – Villa dei Misteri train station is almost directly next to the Porta Marina main entrance to the Pompeii excavations. Using the front wagon in the train gives travelers a head start – walk in the direction of the train travel, ignore the touristy shops and restaurants and cross the road directly to the main gate on the left.

Tickets for the Circumvesuviana regional trains must be bought from the ticket window – buy return tickets to save queuing time. Most rail passes are not valid on this regional train but the highly recommended Campania Arte Cards do work on this line too. The ticket fee is currently just less than €3 one-way.

The Circumvesuviana commuter trains are without air conditioning and may get very busy at times. Pickpockets are known to operate on this train, especially when close to Naples. The express trains simply stop at fewer stations – there is no difference in the comfort of the trains. 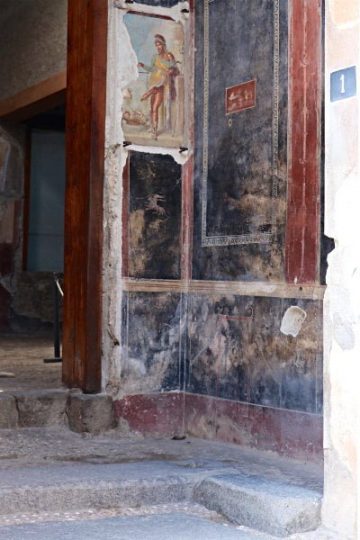 The Circumvesuviana Garibaldi station is in the basement of Naples central station (Stazione Centrale FS). Once past the ticket barrier, there is only a small coffee bar in addition to the three railway platforms. Check the train times on the screens before passing through the ticket barrier – it is more pleasant to spend time in the more spacious open station area with several coffee and shopping options.

At busy times, it is sensible to go down to the platform a few minutes early before the rush of arriving passengers going up the stairs. Go to the far end of the platform to board the first coach of the train traveling from Garibaldi.

The Circumvesuviana train to Pompeii usually departs from platform 3 but not all trains departing from here stop at Pompeii. Make sure the final destination is Sorrento. If unsure, ask any local – they all know exactly where foreign tourists are heading.

Garibaldi station is the second station on the Circumvesuviana line. The trains depart from Napoli Porta Nolana – a two-minute train ride away. If traveling with luggage or keen on a seat, start the ride from there, or simply take any train from Garibaldi to Porta Nolana and then retrace the route back. 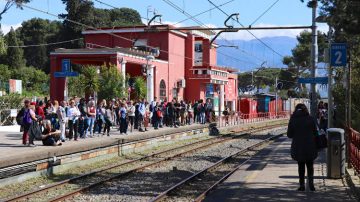 The Pompei Scavi – Villa dei Misteri train station is almost directly next to the Porta Marina main entrance to the Pompeii excavations. Although there are no ticket barriers, tickets must be bought from the ticket window before boarding the trains.

To return to Naples from this station, board any train heading for Napoli-Porta Nolana station from platform 2. The underpass to platform 2 is from inside the small station building – follow the signs to the WC.

Only small backpacks (30x30x15 cm) are allowed into the Pompeii archaeological site – not always strictly enforced if the bag is slightly bigger but certainly no roll-on bags or suitcases. Free lockers are available at all entrances while standard paid left-luggage services are available at Pompei-Scavi station.

The typical tourist oriented restaurants, cafes and bars line the roads near the entrances to the Pompeii excavations. These are fine for a drink while waiting for a train but for serious eating few would regret holding off until back in Naples (or Sorrento).

Transportation from Naples Airport to Pompeii 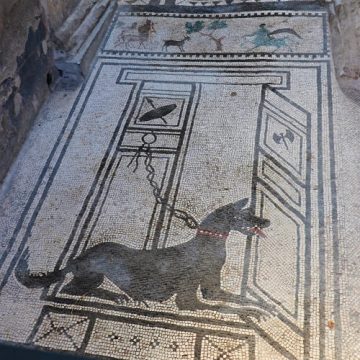 Getting to the excavations of Pompeii from Naples Airport is fastest by car (taxi or airport shuttles) but cheapest by bus and train.

Traveling time from Naples Airport to Pompeii by car can be as fast as 20 minutes. Suntransfers quotes around €80 for a car or €120 for a van. Many shuttle services are available and best booked in advance – compare rates as prices vary widely. Some offer deals that allow travelers to visit Pompeii en route to Sorrento or the Amalfi coast – these transfers are not cheap but convenient, especially when traveling on a tight schedule.

The cheapest option for getting from Naples Airport to Pompeii is to take the Alibus from the airport to Garibaldi Station and continue from here on the Circumvesuviana train, as described above. The Alibus is €5 – tickets available from the driver, no passes valid. Traveling time is around 20 minutes to the station.

Transportation from Naples Port to Pompeii

Pompeii is also easily reached by public transportation from Naples ports. Depending on the port of arrival, use the bus, metro or tram to reach Garibaldi station (Naples Central) and from there the Circumvesuviana train as described above.

Naples is a hugely popular stop for Mediterranean cruise boats and arranging own excursions to Pompeii is relatively easy using public transportation. However small groups could easily arrange excursion tours from operators specialising in shore transfers to Pompeii or Mt Vesuvius or full day-trips to Pompeii and the Amalfi coast.

Transportation from Rome to Pompeii 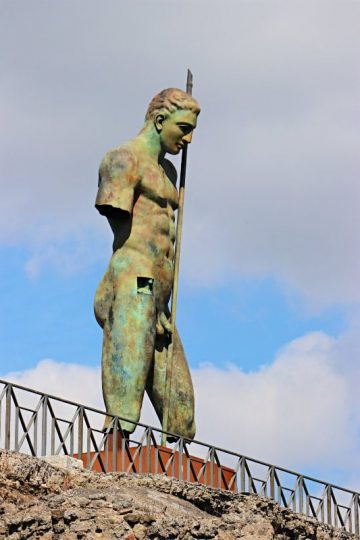 Travelers from Rome to Pompeii have three basic choices in addition to self-driving: day-trip tours, trains, or buses.

TIP: When booking tours, make sure what is included in the price and what not. Some tours do not include the admission ticket for Pompeii – a saving for travelers with children who enters for free, a Campania Arte Card or similar but an extra cost (and potential hassle) for travelers without.

A variety of day-trips are available from Rome to Pompeii that usually last up to 12 hours. Travel is usually by bus or van but a few day-trip tours use the more relaxing trains too. For travelers with limited time, an express trip by train leaves Rome early morning and has travelers back in Rome after lunch!

For small groups and families, a private tour is a good option – for groups as small as six private tours may even work out cheaper than booking a standard bus tour, even without factoring in the convenience. Even for single travelers, paying a bit extra for a small group tour or mini group may be more pleasant than a full bus.

By train, different routings (and prices) are available. The fastest routings take just over two hours – avoid journeys taking more than three hours or requiring more than one transfer. Mainline trains use the less convenient Pompei station – if traveling through Naples, it may be simpler to transfer to the Circumvesuviana trains here and arrive at the more convenient Pompei Scavi station.

Inter-city buses are generally the cheapest way to travel between cities in Italy. Flixbus currently offer Rome to Pompei fares for as low as €12. The fastest traveling times on direct (but not non-stop) buses are just over 3 hours but commonly a bit longer. Shuttle services are also available that takes travelers directly to Pompeii but the return times are fixed with fewer options.

Multiple day trips are also easily arranged from Rome and Florence to include Pompeii and other sights in the region that could also be seen on a rushed day trip such as Naples, Herculaneum, Mt Vesuvius, Sorrento and the beautiful Amalfi coast and Island of Capri.

For More on Pompeii, Herculaneum and Naples: