Kinderdijk near Rotterdam and Dordrecht has the largest collection of historic windmills in The Netherlands. The area is easily explored on foot but cycling is more fun. 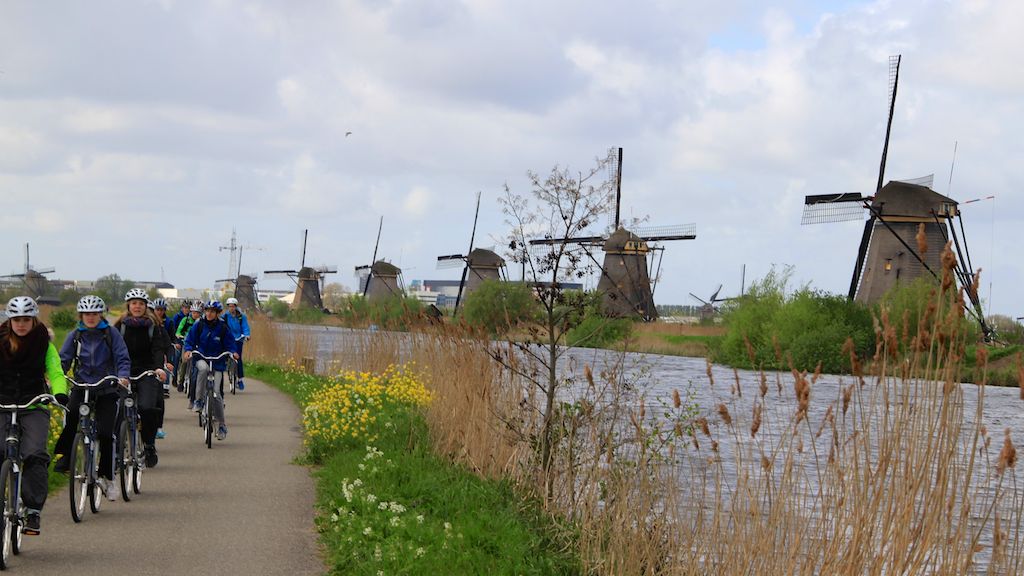 The 19 historic windmills at Kinderdijk near Rotterdam form the largest collection of working windmills in The Netherlands. These windmills, inscribed on the UNESCO World Cultural Heritage list, can easily be seen on a short walk but cycling pass them is more fun and allows visitors to explore more of this lovely rural landscape. Bike rentals are available onsite with the typically flat Dutch landscape providing not much of a challenge, as long as the wind remains calm. Cycling gear and even helmets are completely optional. Dedicated cycling paths provide a safe environment even for inexperienced cyclists. Parking is available at Kinderdijk while public transportation (bus or boat) and day-trip tours offer further options.

Despite the prominent ticket office at the entrance, access to Kinderdijk is free. The tickets are for access to the interior of the Museum Mill.

The 19 Historic Windmills at Kinderdijk

The main reason to visit Kinderdijk is to see the 19 historic windmills – the largest collection of historic windmills in The Netherlands. These windmills are on the dikes in the community (gemeente) Molenwaard in Ablasserdam near Rotterdam in South (Zuid) Holland.

Visitors can see the windmills from any of the public paths and walkways along the dike. The mills are privately owned and generally not open to the public. The exception is the Nederwaard Museum Mill, which charge a rather hefty €6.50 (for surprisingly little).

Cycling along the dike is more fun than hiking and of course allows visitors to go farther faster. The Ablsasserdam area still has over 50 historic windmills and cyclists can thus easily see more than just the 19 mills directly at Kinderdijk.

Holland is famously flat and the only inclines cyclist will experience are on bridges to cross the various waterways. Wind can be more problematic. The windmills were placed here and worked because of frequent strong winds. Strong winds often become apparent only when turning back.

Several cycling paths are in the immediate vicinity of Kinderdijk for easy and safe access even to inexperienced cyclists or those out of practice.

Although these cycling paths are not specifically marked for tourist circular routes, it is easy enough to work the routes out and to adjust to conditions.

A few suggestions as marked on the map: 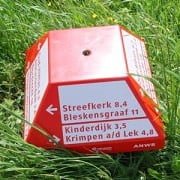 Turn back whenever – the route on the Google map is marked to the red marker. The distance to here is 3.5 km one-way but of course visitors with less time or stamina could simply turn back earlier.

These routes can easily be adapted with many options available for short cuts or to make detours to anywhere looking interesting. Bike rental shops usually have detailed cycling maps and tourist information offices suggested routes of interest to travelers not necessarily looking for the shortest or fastest routes.

Renting Bicycles at the Kinderdijk Windmills

Bicycles can be rented at the café inside the souvenir shop right at the parking at Kinderdijk. The process requires a photo ID but is otherwise very unbureaucratic – payment is made when the bicycle is returned. Rental is by the hour, which makes it an ideal option for anyone just wanting a quick, fun cycle.

Pick whichever fiets looks and feels good, and simply change if it doesn’t. These are typical Holland bikes – often without gears, with back paddle brakes, and rattling enough that using the bell is rarely necessary to warn pedestrians. The old sprung leather saddles are surprisingly comfortable.

Children’s bicycles are also available but not always on display. 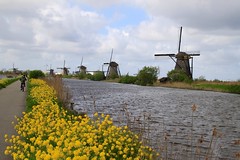 These bikes work fine on the flat Dutch landscape but for longer distance cycling, it may be a better option to rent elsewhere. Many tourist information offices and rental shops at train stations rent out bicycles by the day rather than by the hour, as is the case directly at Kinderdijk. Children’s bicycles, tandems, and geared bikes are usually available and in good condition.

Two easy options that take reservations – useful for tandems or any other special bikes – are: 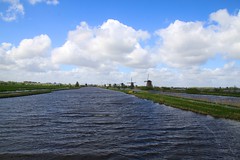 Cycling from central Rotterdam should take around an hour too but this 15-km distance requires a lot of city cycling and a ferry crossing to reach Kinderdijk.

Helmets are not obligatory when cycling in Holland and very few Dutch would use one except when participating or practicing for races. Most bike rental stations have helmets available for free or at a small fee. 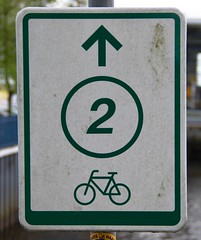 Kinderdijk is easily reached by car – note the small car ferry directly at Kinderdijk that connects Veerkade (south) with Hoofdstraat in Krimpen aan de Lek (north of the Lek River). It is often the easiest route but not included in all online navigation systems. Car ferries further to the east of Kinderdijk is also a faster way to reach the northern shores of the Lek than going all the way to a normal road bridge.

Parking is available directly at Kinderdijk for a charge – around €6 per day. Free parking can be found further away but do note the parking restrictions – locals are quick to call the police on illegally parked cars, or cars parked on private property.

By public transportation, Kinderdijk is usually easiest reached on bus 90 that connects Rotterdam and Utrecht hourly via Kinderdijk. The bus stops directly in front of the entrance to Kinderdijk. 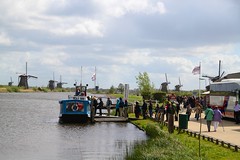 A further option is by waterbus 20 that connects Rotterdam Erasmusbrug and Dordrecht Merwekade. To reach Kinderdijk, change from the waterbus at Ridderkerk (Veer de Schans) to the Driehoeksveer passenger ferry (separate charge) to cross the river to Kinderdijk. It is a short walk from here to Kinderdijk. Note the gaps in the schedule on weekday mornings from October to April. Total traveling time from Rotterdam is only 35 minutes.

If planning on renting a bike, also consider getting off the waterbus at Ablassedam Veer Kade, which is near the tourist information office renting bicycles. 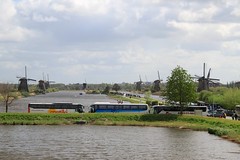 Further boat cruises, especially from Rotterdam and Dordrecht, and bus day-trip tours are available from most cities in The Netherlands to Kinderdijk.

An alternative to Kinderdijk is the historic windmills at Zaanse Schans in North (Noord) Holland. It is closer to Amsterdam and very popular with day-trip tour excursions from the Dutch capital.