The colorful weekly show cheese market in Alkmaar in North Holland is the most-famous and most-picturesque kaasmarkt in the Netherlands.

The cheese market in Alkmaar, Noord Holland, is one of the top tourist highlights to see when visiting the Netherlands. This kaasmarkt is now staged for tourists but still use the traditional auction rituals and dress. The main market is on Friday mornings from April to September but an evening market is often held on Tuesday evenings in July and August. The historic town center of Alkmaar is pretty and pleasant for strolling around and enjoying the outdoor cafés, bars and restaurants. 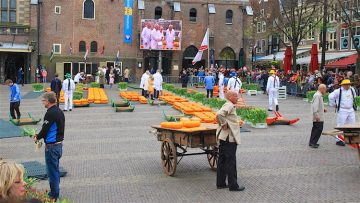 The first official cheese market in Alkmaar was held as early as 1365 with the traditional market held on Waagplein at least since 1622. A century ago, up to 250 tons of cheese were traded on market days with activity continuing way past midnight.

Nowadays, the traditional kaasmarkt is purely for tourists but still follow the old traditions and costumes making it a very colorful spectacle. The whole procedure and traditions are explained in various languages during the market process. The cheese traded in Alkmaar is mostly large Gouda wheels or the smaller Edam style cheese. 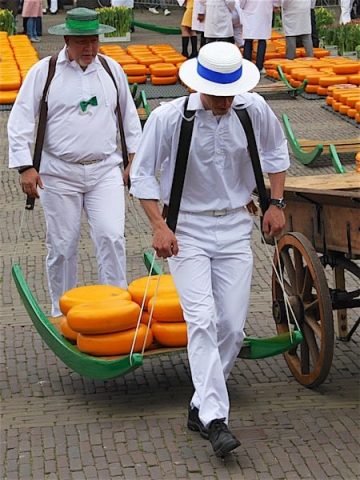 Trading on the Alkmaar kaasmarkt starts at 10 am sharp when the market bell rings but activity starts from around 7 am with up to a thousand cheeses put on display by 9:30. The various cheeses are tested and tasted and prices negotiated. Prices are agreed with a traditional hand slap.

It is the traditional guild of forwarding companies responsible for transporting the cheese that makes the Alkmaar cheese market so special and colorful. The head is called the cheese father and wears an orange hat and cane. Foremen wear bow ties while the cheese carries are in white with lint on the straw hats identifying their company – red, green, blue and yellow

After the cheeses have been weighted on the large city scales in De Waag, they are placed on barrows for transportation to the carts or lorries of the cheese buyers. The wooden barrows hanging between two carriers usually have eight Gouda cheeses weighing around 13.5 kg each. Including the wooden barrow, the total load is around 130 kg.

The cheese carriers proceed in a rather comical out-of-rhythm fast walk. This special cheese carriers’ dribble walk ensures that the balance is maintained and no cheese fall off.

By tradition, smoking, drinking alcohol or swearing is not allowed during market hours by participants – any violation is fined with money going to charities.

Cheese maids promote cheese and often pose for photos and hand out samples. They have been known as Frau Antje in German and since the early 1960s played an important role in promoting Dutch tourism in Germany – the nearby beach resorts remain hugely popular with German visitors, especially from the Rhinelands and Ruhr district.

During the market, stalls will sell a variety of cheese and cheese products for visitors to sample. Craft and flea markets are often held in nearby streets on market day. 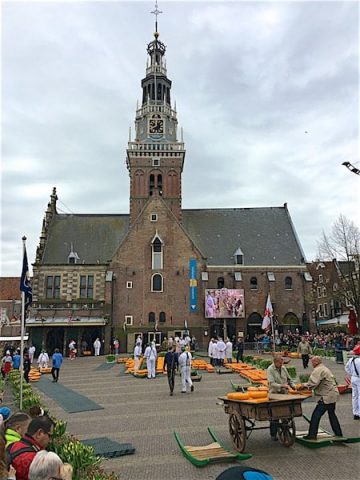 The cheese market in Alkmaar is held on the Waagplein – the square in front of the De Waag – the building that houses the official weighing scales of the city. These huge scales may appear rough but even a small bunch of keys are enough to sway them.

This building is also home to the tourist office and the Dutch Cheese Museum (Het Hollands Kaasmuseum), which on busy days offers the best views of the cheese market.

The museum explains the cheese making process and has some historical instruments on display. The Museumkaart is accepted – otherwise admission is €5, which is not much but the display is also not particularly impressive for anyone already familiar with the cheese making process. Time is often better spent in the lovely old town of Alkmaar with around 400 listed buildings.

When is the Alkmaar Cheese Market Held? 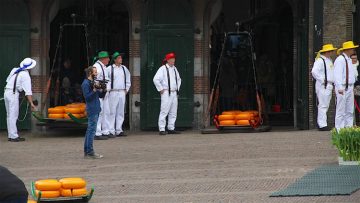 The Alkmaar cheese market takes place on Friday mornings from 10:00 to 13:00 from April to September. Check if traveling early or late in the season – the market will open Easter weekend at the latest even if in March. 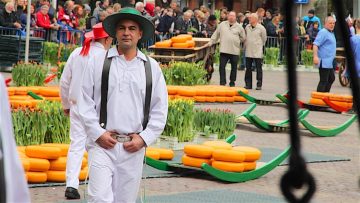 The Alkmaar cheese market is very popular and it can get crowded but as no visitors stay the whole morning, crowds move on soon enough. Bus groups often arrive early and leave early making the market more pleasant after 11:00 or at noon. While the carillon plays, the participants usually take a break – activity resumes in a few minutes. 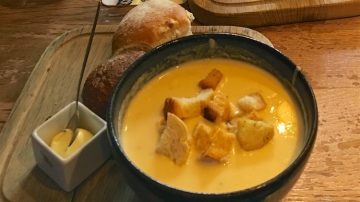 A good strategy is to arrive early and simply have a coffee in one of the pleasant cafés in Alkmaar’s old town if the crowds are too heavy at the beginning of the market. More pleasant is the market followed by lunch – cheese is available on most lunch menus.

Even when the area of the market on Waagplein is crazy busy, streets two or three blocks away could be very pleasantly quiet.

Transportation to Alkmaar in North Holland 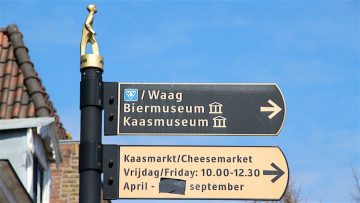 Alkmaar is only around 40 km north of Amsterdam in the province North Holland (Noord Holland). Driving times could be as fast as 40 minutes but traffic usually means it is significantly slower.

Avoid driving in the old town center of Alkmaar. Parking is easier (and much cheaper) on the outskirts of the old town – modern shopping centers in Kwakelkade are convenient. The parking for €3 per day marked on some Google maps is for real and a good deal – it is in Parkeergarage De Kwakel, Oosterwezenstraat 4. 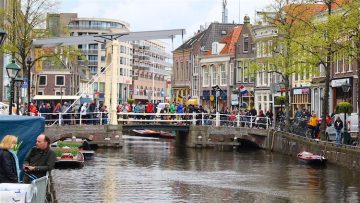 Alkmaar is easily reached on train as well – tickets are available online from Trainline. Direct trains from Amsterdam Centraal could be as fast as 35 minutes – avoid the Sprinter trains that are direct too but with 14 stop take nearer an hour. Up to four trains are available per hour but using the fast train is a sensible choice.

Trains are also available twice per hour to more local destinations such as Den Helder, Hoorn and Haarlem with buses running to popular seaside resort towns such as Egmond aan Zee, Bergen and Schoorl.

Alkmaar station is to the west of the old town center – the 15-minute walk to the cheese market may be faster and simpler than working out the local bus system. Bus stop Alkmaar, Kanaalkade is just about a block from the cheese market – many buses from the station stop here.

Other Cheese Markets in Holland

Alternative major cheese markets in the Netherlands are Gouda in South Holland and Edam in between Alkmaar and Amsterdam. Gouda had a beautiful historic town center with a magnificent town hall, huge market square, an interesting local history museum, the St Janskerk with fantastic church colored glass, and of course a lot of cheese. The cheese market in Woerden in Saturdays is a less touristy option and a good venue to taste farm-made cheeses.

See also: Best Cheese Markets to Visit in The Netherlands for more on the kaasmarkt in Gouda, Edam and Woerden.