Many savings options and discounted tickets are available for traveling in the panoramic cars of the Bernina Express trains through the Alps in Switzerland.

Many savings options and deals make traveling on the Bernina Express trains in Switzerland cheaper. All Swiss Railways discount cards and deals may be applied including the Swiss Pass, half-fare, and junior cards. The Graubünden Pass gives spectacular value for holidaymakers in this lovely Alpine canton of Switzerland. The obligatory seat reservation fee is never discounted but can be avoided altogether by using regular regional trains on the same tracks. In winter, the luxury panoramic cars may be used for only a small surcharge.

Traveling in the luxury Bernina Express trains with its huge panorama windows always require seat reservations. This reservation fee – currently CHF26 in the high season from March to October (CHF10 in winter outside holiday periods) is always charged, even for children, Swiss Pass, Junior Card, and other passes.

Reservations can be made up to minutes before the actual departure or well in advance. It is easily done online at Rhaetian Railways, where the exact seat may be selected from the diagram. Note that the direction of travel of the train is not guaranteed, although the first-class wagons are usually at the front.

The reservation and ticket purchase for the Bernina Express can be done in two separate transactions. Reserve in advance to guarantee a seat, but if the weather turns out absolutely miserable, simply don’t buy a ticket for travel. (The reservation fee is of course lost forever.)

Sample fares without the reservation fee for the Bernina Express in second class (first class) are:

Travel to Poschiavo is around CHF8 cheaper.

A return ticket is simply double the single fare and thus gives no savings.

Savings Fares and Discount Tickets for the Bernina Express Train

Although the Rhätische Bahn is a separate company from Swiss Railways, all regular Swiss Railways discounts and savings passes may be used. The half-fare card, which cuts virtually all public transportation fees in Switzerland in half, is often the most useful. Special short-term, one month, international half-fare cards are available for non-Swiss residents.

Two special regional travel passes are only valid on public transportation in Graubünden:

The Rhaetian Railways sometimes have special deals for travel on the Bernina Express (and other trains in Graubünden) making it worth a peek at its website before booking. Swiss Railways also often have RailAway package deals with discount combination sightseeing admission or event tickets that may offer further savings on train travel.

Many travel agents offer package deals combining Swiss train travel with hotel reservations in package deals, which can offer considerable savings over separate bookings. In the off-season, free upgrades to first-class travel are often available in such package deals.

Several British travel agents such as Rail Discoveries and Great Rail Journeys specialize in train travel and have package deals cheaper than booking various trains and hotels separately. Some of these group journeys use train travel from Britain to Europe while some fly travelers to Switzerland.

Swiss railway passes and train tickets can also be bought in the USA from RailEurope – exchange rates and foreign credit card charges can sometimes make a difference in prices.

For travelers with children 6 to 16, the Junior Card is often the best public transportation deal in Switzerland. It cost CHF30 per year but allows the child to travel for free when a parent (very broadly defined) has a valid ticket. It pays for itself on a Chur to Tirano journey.

The Junior Card can be added for free to almost any international Swiss Railways travel card, in which case it is referred to as a family card. However, the child’s name must be added at the time of purchase – it cannot be added at a later stage.

Children under 6 travel for free on public transportation in Switzerland

The CHF26 reservation fee for the Bernina Express and other trains or buses are not discounted for children.

However, more interesting for savers, is that from mid-December to end-March, the panoramic cars of the Bernina Express are often attached to the regular regional trains running from St Moritz to Tirano and St Moritz to Chur. These more comfortable seats may be used without a reservation but a surcharge of CHF10 is payable (directly to the conductor).

Cheaper Regular Regional Trains on the Bernina and Albula Lines

Regular regional trains of the Rhätische Bahn operate on the same tracks and with higher frequency than the luxury Bernina Express trains.

A good option, when planning sightseeing along a return journey, is to enjoy the convenience of the direct Bernina Express one way and to return with sightseeing stops en route on the regional trains.

The express in “Bernina Express” indicates that the train does not stop very frequently – its actual speed is no faster (or slower) than regular trains using the same tracks.

Regional trains in Switzerland are generally very comfortable too. The exact train and seats will be known only when boarding the train – many travelers find the seats in the older wagons more comfortable. In contrast to the always air-conditioned panoramic cars of the Bernina Express, some regional trains only have heating but windows can be opened for great views and non-glare photos too.

First Class or Second Class? First-class is almost twice the price of second class but some may find the spacious seats and fewer passengers worth the splurge.

On the Bernina Express panoramic window cars, seats in second class are comfortable and usually spaced two on each side of the aisle, often making seating for a group of four. First-class seats are a bit wider with two seats on one side and only a single seat on the opposite end of the aisle.

The Bernina Express trains do not have a restaurant car or at-seat restaurant service as on the Glacier Express. A trolley with coffee and snacks usually operates on the train but it may take hours before it comes by. Bringing a picnic and own drinks is a cheaper (and generally much better tasting) option. Swiss Railways coffee is surprisingly good but comes at a price.

A few points to keep in mind when picking seats:

Traveling from north to south is probably a bit more interesting, as the view looking down from the Alps when coming over the Bernina Pass and around Alp Grüm is nothing short of spectacular. Going up the mountain of course improves the view constantly too but the surprise element of suddenly looking down the valley is missed when traveling northwards.

In winter, the final travel may be in the dark on the northbound trains, which truly ruins the views. 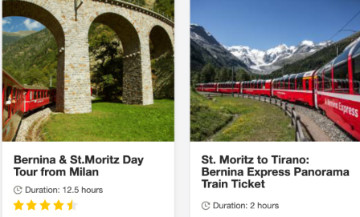