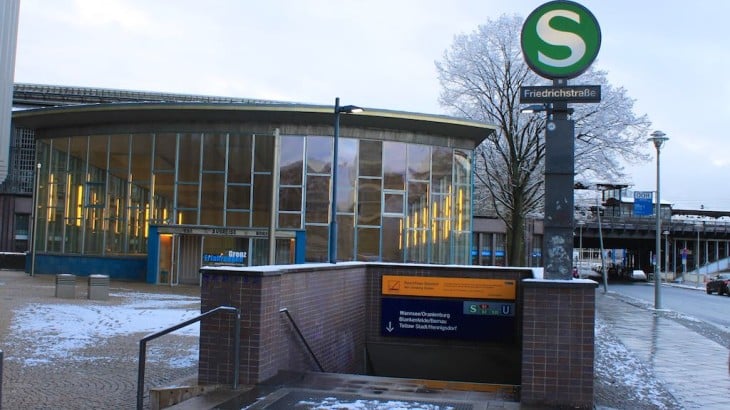 The Tränenpalast at the Friedrichstraße S-Bahn train station was the main departure point for travelers from the former East Germany to West Berlin. During the Cold War, travelers crossed the border here rather than at the far more famous Checkpoint Charlie. A free museum in the Tränenpalast – literally Palace of Tears – explains the role of this border post, as well as the complicated politics and history that necessitate this inner-German checkpoint in the first place. This excellent modern history museum also places much emphasis on how the division of the two Germanys influenced the lives of ordinary citizens. 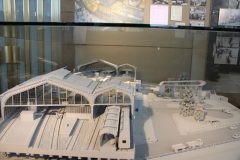 In 1962, a border-crossing point was built at the Friedrichstraße train station in East Berlin to control railway passengers traveling between East and West Berlin. All travelers, whether German or from other countries, passed through here.

The departure hall building (Ausreisehalle) soon got the name Tränenpalast – literally Palace of Tears. Palace due to its surprisingly elegant design for an East Berlin building and tears, as East Germans had to say farewell here to friends and family returning (or leaving for) the West knowing that they could not join them in their travels and never really knowing when, or if, they will see them again.

The design of the Tränenpalast by architect Horst Lüderitz was quite brilliant and contemporary: narrow steel pillars and large glass windows gave it an elegant, airy feel quite in contrast to its function and the mean spiritedness of the bureaucracy working inside. Furthermore, the customs and immigration checks were done in a space significantly lower than the windows would hint at from the outside. It was hard to see in, or out, of the building and thus further hindered any contacts between the east and west.

Once past the strict customs and immigration checks, an enclosed passage – no longer in existence – led travelers directly to Friedrichstraße station with its train connections to West Berlin. Here armed patrols were common while dog patrols continued on levels below the railway platforms.

The Tränenpalast lost its importance on November 9, 1989 – the day the border opened and every East German citizen could travel freely from the German Democratic Republic (GDR / DDR) into West Berlin and the rest of West Germany. Border controls between East and West Germany formally ceased on July 1, 1990. After the Wende, the Tränenpalast was used for events and even a nightclub – the venue is imminently suitable for a dance hall – but more recently it was turned into a museum.

The Museum in the Tränenpalast 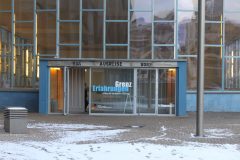 The museum in the Tränenpalast explains the process of leaving the East for the West during the Cold War period. The permanent exhibition is titled “GrenzErfahrungen. Alltag der deutschen Teilung” (Border Experiences. Every day life in divided Germany.) In addition to the larger geo-political events, the museum also explains how the division, and the prohibition on normal contacts with the West, influenced the lives of ordinary Germans during the Cold War period.

Friedrichstraße Station in Berlin During the Cold War 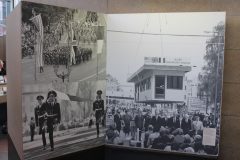 Internationally, Checkpoint Charlie in Friedrichstraße was probably the best-known border crossing between East and West Berlin during the Cold War. It was here that Soviet and US soldiers (sometimes in tanks) tried to stare each other down. However, for travelers, rather than spy stories and movies, the border crossing at the Friedrichstraße station (Die Grenzübergangsstelle Bahnhof Friedrichstraße), a few blocks further north, was of far bigger importance. 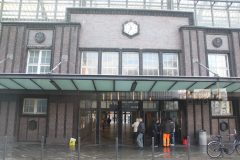 During Cold War, as it is in deed today, the station at Friedrichstraße was a central transit point in Berlin. During the Cold War, much of the Friedrichstraße S-Bahn station, which is inside East Berlin and quite some distance from the Wall, was freely accessible by train to travelers from West Berlin but the pedestrian exits were firmly closed, except for travelers going through the very strict control points.

The communist East German regime could be pragmatic to earn hard currency. Throughout the Cold War, the West Berlin U-Bahn trains were charged to take the direct shortcut underneath Friedrichstraße, which was part of East Berlin, but without stopping at the Stadtmitte and Französischer Straße stations. 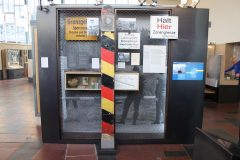 During the 1950s, it became increasingly clear that the people of West Germany were enjoying a higher standard of living and much more political, economical, and personal freedoms compared to those in the Communist East Germany. East Germans, especially young well-qualified people, increasingly left the East to settle in West Germany.

This situation was politically and economically unbearable for the communist regime of the German Democratic Republic (Deutsche Demokratische Republik / DDR) and its most famous response was to build the Berlin wall. Not only was West Berlin enclosed by this “anti-fascist” wall but the near 1,000 km border between East and West Germany was also strengthened to make unauthorized crossing impossible on pain of death. East Germans were completely forbidden from traveling to the West and any contacts with the West were frowned upon if not totally illegal. 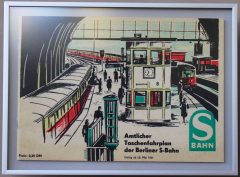 However, by 1964, the total ban on traveling was slightly relaxed. East Germans older than 65 were allowed to visit the West but only if they had family in West Germany – purely sightseeing and shopping trips were not allowed. The reasoning was simple: if older citizens left the DDR, it would be no loss to the state economy. The DDR state no longer had to finance their healthcare, housing or pensions. Even if they returned, and almost all did after their travels, they might bring back some items and money paid by their families in the West, as a net gain to the East German state.

For younger people, and pensioners without family in the West, leaving the East was more complicated. No sightseeing or shopping visits were allowed. Occasionally, individuals were allowed to leave the DDR but in such cases, it was a one-way trip. No returns were possible, and any application for an Ausreise (literally, to travel out) was followed by probably years of discriminations even if the approval was never granted.

In the museum, note the photo of the family who were allowed to leave East Berlin legally, after years of waiting and having all their property confiscated, only hours before the Wall came down. 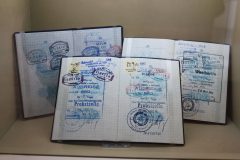 During the Cold War period, family and friends had to bid travelers farewell outside the departure hall. The portal in front of the building, which prevented people from looking in, has since been demolished. Hidden surveillance cameras observed all goings on both inside and outside the hall – in the DDR, no one was above suspicion of acting against the interest of the state.

Customs checks were thorough and queuing was the norm. The list of items visitors were not allowed to take out of the East was long (and the list of items not allowed into the East equally so). Forbidden items included amongst others any East German Marks. Foreign visitors had to spend a minimum amount of East Marks per day of their visit and had to keep receipts of all purchases to prove that they had spent the money. 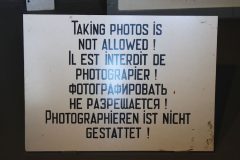 Travelers were also not allowed to take out certain foodstuffs, as it was subsidized by the East German state and thus cheaper than in the West. Homemade cakes were allowed but a severe poking while looking for illegal substances was obviously made. Popular souvenirs allowed included literature and sheet music, which were much cheaper in East than West Germany.

On the return trip, literature was thoroughly checked to make sure nothing submissive was included, such as pornography, or even worse, West German political magazines. Western magazines of any kind were a guarantee for a thorough interrogation.

The passport control booths in the Tränenpalast are copies of the originals, complete with mirrors and raised floors for the officials. Here, visitors, even families traveling together, had to enter one-by-one and hope the door opened again at the other side to leave for the West and not being carted off for interrogation. The bureaucracy was unpredictable and mean spirited. Documentation was thoroughly checked – even the slightest error or doubt could result in being detained or departure being refused.

In typical East German style, the border authorities were of the opinion that the shape of the ear, especially the left ear, was more reliable than the frontal view. (The secret police (Stasi) similarly were kept thousands of smell samples, as they were studying better ways to identify people by body odor.) 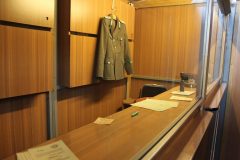 Once through, the traveler could take the train from Friedrichstraße station to the West. The station also had an Intershop – another East German hard currency earner. Items, including cigarettes and alcohol, could be purchased here duty free but only with Western currency.

The museum in the Tränenpalast fully explains the use of this border control point, as well as political and social events related to its creation and demise. Many original items are on display, while others, such as the passport control booths, were recreated. In addition to many photos and information boards, visitors may select to view a wide range of historical videos. Almost all items are well described in both German and English.

Visiting the Tränenpalast in Berlin

The opening hours of the museum in the Tränenpalast in Berlin are Tuesday to Friday from 9 am to 7 pm and weekends from 10 am to 6 pm. Admission is free.

The museum’s free App in English or German for iOS or Android has a basic game, which is quite useful to let children explore the process, and the unpredictability and unfairness of being allowed, or not permitted, to travel from East Germany.

A very useful audio guide may be downloaded from the Tränenpalast site in German or English. It covers a range of topics including the broader political developments and events but also more specific details of for example the passport control process, buying at the Intershop, and smuggling. 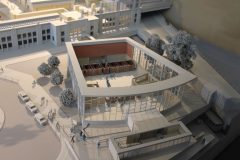 The Tränenpalast, Reichstagufer 17, is directly to the north of Friedrichstraße station – one of the most important train stations in Berlin. It is also an easy stroll from other sights in Mitte such as the Reichstag, Brandenburger Tor, Unter den Linden and the Museums Island.

The Museum in the Tränenpalast is managed by the Stiftung Haus der Geschichte der Bundesrepublik Deutschland (HDG), a foundation dedicated to preserving the history of the German Federal Republic. The foundation has three further free excellent contemporary history museums (and frequently changing temporary exhibitions):