Tickets for the Alhambra, Nasrid Palaces and the Generalife in Granada are cheapest on site but best bought online in advance to ensure actual admission. Tours and combination tickets may give access on busy days.

Tickets for the Alhambra in Granada, one of the top sights to see in Spain, often sell out. It is highly advisable to buy skip-the-line tickets online in advance. The cheapest Alhambra and Nasrid Palace tickets are sold by the Alhambra itself but at busy times, it is easier to get tickets as part of a tour group or on a day-trip visit from Seville or Malaga. The Nasrid Palace may only be seen on time-slot tickets but the rest of the Alhambra, including the Alcazaba fortress and Generalife garden palace may be seen at any time.

Ticket Options for the Alhambra

The number of visitors to the Alhambra, and especially the Nasrid Palace, is strictly controlled. As a result, tickets often sell out and most visitors arrive with a skip-the-line ticket.

It is important to distinguish between the different tickets that are available for the Alhambra. Only the Nasrid Palace (Palacios Nazaries) has a specific time slot that must be adhered too.

Below are the official tickets for the Alhambra if bought onsite. Any online purchase has a convenience surcharge that is absolute worth the expense – not so much to skip-the-line but to ensure actual admission into the Alhambra. 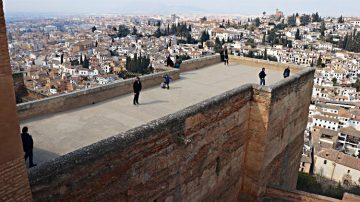 Discounted tickets are available for:

Admission for children under 12 is free but they MUST have a free minor’s ticket, which must be added at time of booking. These tickets are NOT available at the ticket office at time of entry.

Buying Tickets Online for the Alhambra and the Nasrid Palace

Buying tickets in advance online is almost essential to see the Alhambra and especially the Nasrid Palace. The cheapest advance purchase tickets for the Alhambra is sold directly at the official website.

The official website of the Alhambra is at www.alhambra-patronato.es even if many others claim official in the name. Tickets bought here are the cheapest and carry just a very small service charge. Travelers planning several months ahead, could buy tickets from online resellers, well before these tickets become available at the official website. These advance tickets carry a very small surcharge and are a much cheaper option than having to buy a guided tour, as a certain way of guaranteeing admission.

Pick the print-at-home option if available – mobile phone tickets and email codes without a barcode must still be exchange at the main gate – ticket window or vending machines – for a paper ticket before entering the Alhambra. It is usually also possible to pick up the tickets at the Alhambra’s downtown Granada office at Corral del Carbon – near Plaza Isabel Catolica.

Individuals may not resell Alhambra tickets. Use the correct names and carry identification when visiting the Alhambra complex.

Online tickets are available from three months to two hours in advance of a visit. Tickets on weekends and holiday periods sell out fast and even for seemingly normal days may be unavailable. This is in part due to official resellers purchasing for tour groups – tickets not resold may return to the system shortly before the actual date, which explains admission slots becoming available again.

If tickets are not available on a specific date, either hope for the best and risk trying to buy returned tickets in person on the day of visit – see below – or buy a more expensive combination ticket option that will guarantee admission to the Alhambra on a specific day.

Combination Ticket Deals for the Alhambra

Combination tickets may often still give reservations for the Nasrid Palace in the Alhambra when the standard (cheaper) tickets are sold out. Several options are available:

From the Alhambra’s website is possible to buy the following combination tickets:

The Granada Card offered by the tourist information office is also a good choice – it is often a cheaper option than taking a tour or audio tour combination plus giving further sightseeing and transportation advantages. A variety of versions are available but only the Granada Card (around €40) currently includes admission to the Nasrid Palaces in addition to a variety of further sights in Granada and some public transportation. When buying, select the date for the Palace Nasrid admission – in some versions, pick a morning or afternoon admission for the Alhambra. Visitors may enter the Alhambra any time during the day but the exact half-hour time slot for admission to the Nasrid Palaces will be during the selected morning or afternoon period and determined when picking up the actual card. (The card may also be bought directly from the tourist office and may get visitors into the Alhambra with a bit of luck but usually not on the day of purchase.)

Guided Group and Private Tours of the Alhambra

When tickets on the official website are sold out, many may still be available on the same dates through guided tours. The choice of tours are fairly extensive but decided whether to go for the cheapest option to get into the Nasrid Palace or opt for a pricier tour that adds more value. Interesting add-on options to Alhambra tours include flying over Granada, Segway tours and Flamenco shows.

Tour providers to the Alhambra are good at telling visitors what is included in the ticket but sometimes less clear on what is not. If the admission to the Palace Nasrid is not clearly stated as included in the ticket, assume it is not. A time for entering the Palace Nasrid must be stated during the booking process – sometimes the actual time of admission may be slightly different, so always double check the final confirmation time.

The cheapest option is usually to buy admission with an audio guide. This includes admission to the Alhambra at any time during the day, the palace Nasrid at the specified time, and an audio guide (not the official version) with a map with the numbering system of the private audio guide. This option has the advantages of being relative cheap and allowing visitors to move around freely without having to enter at the same time as a group. 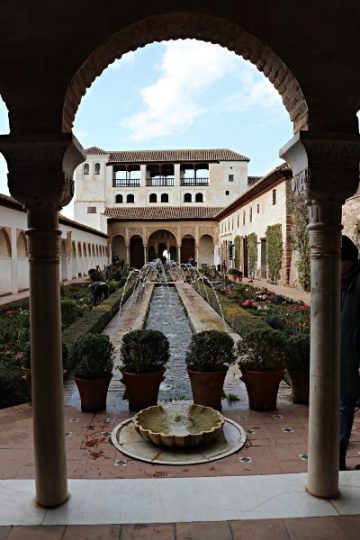 A wide variety of group tours are available but note that admission to the various sights must be together with the group. It is possible to stay within the grounds of the Alhambra at the end of the tour but not to re-enter sights that require a ticket. Miss the departure of the tour and even a printed tour ticket will not be accepted for solo travelers at the various check points.

The cheapest tours do NOT include admission to the Nasrid Palace.

Smaller tour groups are more pleasant as are single language tours where the guide does not have to repeat all information. For smaller groups, a private tour may be a good option and for groups as small as four even work out cheaper.

Also note the tour departure point – some start in downtown Granada and may walk, or take the bus, up to the Alhambra. Many start at or near the main entrance.

Day-Trip Tours to the Alhambra from Seville and Malaga 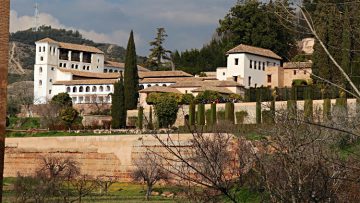 Daytrips to the Alhambra (and Granada) from other cities in Andalusia are surprisingly good value and are often not much more expensive than a guided tour that starts in Granada.

In addition, these day-trip tours often have availability at much shorter notice than the local tour guides. Depending on the season, tours are usually available from amongst others Seville, Malaga and Costa del Sol resort towns such as Marbella, Torremolinos, Estepona and Fuengirola. For smaller groups, private tours from Malaga and Seville may offer better value and in some cases work out cheaper than standard group tours.

Arriving in Granada Without Alhambra Tickets 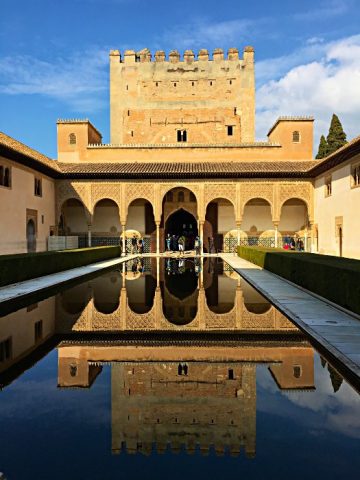 Although online purchases are the most reliable way to ensure admission to the Alhambra, visitors arriving in Granada without ticket still have a few options available:

Failing everything, accept that the Nasrid Palace will require a return visit and see the rest of the Alhambra palace complex for which tickets are easier to obtain at short notice.

See also Tips on Visiting the Alhambra Palace Complex for more on visiting one of the top sights to see in Europe.