Huge discount deals on brand name clothes are the main attraction of the factory outlets and Cité Europe mall near the Eurotunnel terminal in Calais. 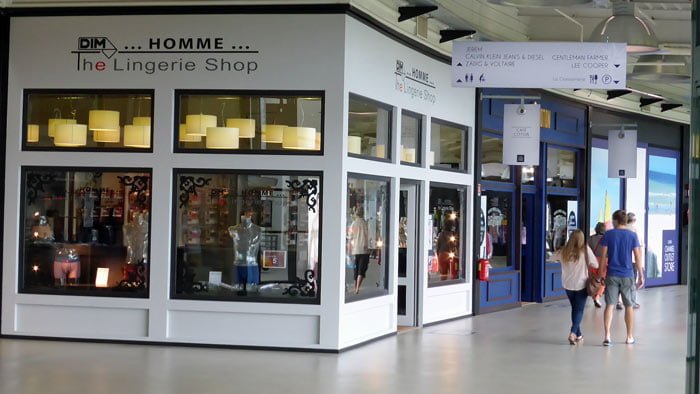 L’Usine Channel Outlet Store and the huge Cité Europe shopping mall and entertainment complex are located right at the Eurotunnel terminal in Coquelles in the outskirts of Calais in France. Both malls are hugely popular with British visitors who enjoy saving on brand name clothes or on cheap alcohol before taking the Eurotunnel trains or ferries back to the UK. L’Usine has around 80 factory outlet stores offering permanent discounts on clothing. Cité Europe has around 150 shops including a Carrefour supermarket, over 20 restaurants, a cinema and bowling alley.

L’Usine Channel Shopping Mall has a small coffee shop but for anything more than snacks it is better to travel elsewhere. Ample free parking is available in the basement of the mall.

L’Usine Channel Outlet Store is certainly not the most exciting factory stores outlet mall in Europe or even France. The shops are relatively small and of course the selection available in factory outlet stores depends very much on the season. Easy access, proximity to Cité Europe, and free parking makes it worth a look when in the vicinity.

If traveling to south of France, do stop at the fantastic McArthur Glen Factory Outlet Malls in Troyes between Reims and Dijon.

Opening hours of L’Usine Channel Outlet Stores are Monday to Saturday from 10 am to 7 pm. The factory stores are usually closed on Sunday but usually open on Sundays in December and on many public holidays.

Cité Europe is a huge, modern shopping mall in Calais right at the French terminal of Eurotunnel trains. Apart from the super market and shops, the center also has twenty restaurants, a movie theater and bowling alley.

The main anchor in Cité Europe is a very large Carrefour hypermarket, which has an extraordinarily large wine and beer section. With 150 stores, the center has all the standard stores including large shops by H&M, Zara, C&A, Marionnaud, Sephora, Intersport, Go Sports, Toys R Us, and Darty (electronics).

The twenty restaurants serve mostly French or Italian food but also include a pub, McDonalds and Subway. In contrast to many other parts of France, warm food is available at most restaurants all afternoon.

The shops in the Cité Europe mall are open Monday to Saturday from 10 am to 8 pm (9 pm on Friday). The Carrefour supermarket is open 9 am to 9 pm (closed on Sunday). Shopping hours are often extended with opening hours on Sunday in December.

The restaurants, bars, and cinema are open seven days a week from 10 am to 10 pm.

Cité Europe and L’Usine Channel Outlet Store are both in Boulevard de Europe in Coquelles right next to the Eurotunnel Car terminal a few minutes drive to the south of Calais. If arriving from Calais, use Autoroute A16 (free on this stretch of road) towards Boulogne sur Mer to exit 41. Both centers are almost directly next to the Autoroute exit.

Both malls can also be reached from Calais center on bus 1. The bus stops at Cité Center at Gate (Entrée Porte) 4 and at L’Usine directly at the mall.

Directly across the road from Cité Europe, visitors can often get very good deals for a first or last night in Calais at the Novotel Suite Hotel, the Ibis budget, or Ibis Calais Tunnel sous le Manche hotels.