Baroque churches by Dietzenhofer, Asam, Carlone, & Zimmermann and a romantic old town are the major sights to see in Amberg in the Oberpfalz (Upper Palatinate), Germany. 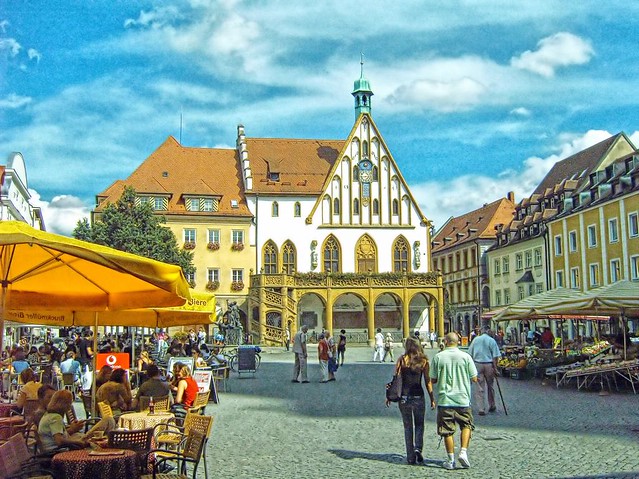 Amberg in the Oberpfalz (Upper Palatinate) in northern Bavaria in Germany is an interesting old town with a colorful history and some astonishing Baroque masterpieces by amongst others Wolfgang Dietzenhofer, Cosmas Damien Asam, Giovanni Battista Carlone, and Johann Baptist Zimmermann. The town was once the capital of the Wittelsbach-ruled Oberpfalz and during the seventeenth century became a bastion of the counter-reformation – the results are some stunning Baroque and Rococo works in what is today a small town far removed from the political, cultural, and economic arteries of the modern world.

A Short Overview of Amberg’s History

Amberg’s written history goes back to 1034 although settlements existed here already in Carolingian times. During the Middle Ages, Amberg grew rich due to the mining of iron ore in the region.

From 1294, Amberg was ruled by the Wittelsbach family and long served as the capital of Oberpfalz (Upper Palatinate), although the dukes generally preferred to rule from their magnificent castle in Heidelberg in the (Rhine) Palatinate.

In 1620, the Oberpfalz became part of Bavaria and the forced return to Roman Catholicism saw many Protestants flee to the Free Imperial Cities of Regensburg and Nürnberg. In 1810, Amberg lost its regional capital status to Regensburg. The town of around 44,000 has important metallurgical and glass industries.

The oval-shaped center of Amberg is a well-preserved historical old town with most of its defensive town walls and four town gates still intact. The romantic setting is further enhanced by the Vils River flowing through the center of the old town.

Amberg’s Marktplatz on the right bank of the Vils River is the oldest part of the town. On its east side is the Gothic Rathaus (Town Hall), which dates in part from 1356. Renaissance additions, including the balustrade and octagonal external staircase, were added in 1552.

The Basilika St Martin (Basilica), Rathausstraße 8, is after the cathedral in Regensburg the largest church in the region. Construction of this Gothic triple-nave hall church, which is 72 m/236 ft long, began in 1421. The interior lost most of its art when the Oberpfalz turned from Lutheranism to Calvinism in 1557. Following the Counter Reformation, the church received a new Baroque interior. However, during the 19th century, most of the interior was restored in a Historicist, neo-Gothic style. The baptismal font is the original from 1417. The 92-m/302-ft tower, which was completed in 1720, can be climbed for fine views of Amberg and the surrounding Oberpfalz countryside.

Three blocks up Lederergasse is the Wallfischhaus (Whale House), Löffelgasse 2. Like other similarly named building in Southern Germany, the name came from the Biblical story of Jonah and the whale, which is illustrated here by two statues dating from 1693.

On the opposite bank of the Vils is the Deutsche Schulkirche (German School Church), which belonged to the former Salesianerinnen (Visitation Order) monastery. Both were designed and built between 1694 and 1699 by Wolfgang Dientzenhofer but the church was extended in the mid-18th century.

The nearby mid-15th-century, former Franciscan church was converted into the Amberg Stadttheater (Town Theater) following secularization in the early 19th century. The Stadttheater in Amberg is one of the loveliest small theaters in Germany and often used for performances ranging from symphony orchestras to chamber music and from opera to modern musicals. Further performances are held in the Rathaus and several churches.

At the far western edge of Amberg’s old town is the huge three-floor, four-winged former Jesuitenkolleg (Jesuit College), Malteserplatz. It was built 1665-87 to designs of Wolfgang Hirschstötter although the northern wing is assumed to be the work of Georg Dientzenhofer. The east wing houses a stylish Baroque library, which contains many of the works taken from regional monasteries following secularization in the early 19th century.

In the same complex is the 14th-century, Gothic Georgskirche (St George’s), Malteserplatz. It replaced the 11th-century church that was destroyed in a major town fire. The Palatinate’s swing to Calvinism saw most of the art destroyed. During the 18th century, the Jesuits installed a Rococo interior. The magnificent, at times almost sculpture-like stuccowork was done from 1718 by Johann Baptist Zimmermann. The ceiling frescoes are by Johann Adam Müller, a student of the Asam brothers.

Follow Georgenstraße back to the center of Amberg where the Regierungskanzlei (Government Chancellery) impresses with its mid-16th-century Renaissance gable. The building now houses judicial courts and is not open for sightseeing.

South from here, forming part of the former Amberg town defenses is the former electoral Schloss (Palace / Palace). It dates partly from the 14th century but received its present form around 1600. It is used for administrative offices and is not open to the public.

A covered bridge connects the Schloss with the 16th-century Zeughaus (Armory) on the opposite bank of the Vils. Viewed from the south side, the arches of the bridge reflect as circles in the river leading to its name as the Amberg Stadtbrille (Town Glasses).

On a 150-m/492-ft hill, just north of Amberg is the Wallfahrtskirche Mariahilf (Pilgrims Church Mary Helped), Franziskanerkloster Amberg, Auf dem Mariahilfberg 3, tel 09621-376-060. The hill has been a pilgrimage site since 1634 when the town received relief from the Swedish troops during the Thirty Years’ War as well as the plague.

The present single-nave Baroque church was erected between 1696 and 1702 to the designs of Wolfgang Dientzenhofer. The stuccowork is by Giovanni Battista Carlone (also active in Waldsassen and Passau) and Paolo d’Allio. The 29 frescoes in the nave and 5 in the choir were painted by the then 22-year-old Cosmas Damian Asam.