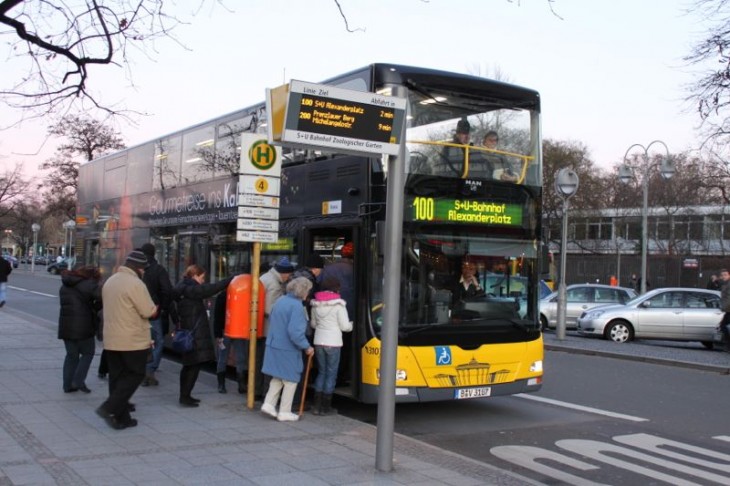 Berlin is very flat and thus great for exploring on foot. However, at nine times the size of Paris, Berlin’s excellent public transportation system is a great help when exploring the city. Berlin uses double-decker buses and for visitors, Berlin bus line 100 and bus line 200 are great ways to see the major sights cheaply. Bus 100 and bus 200 pass directly in front of top sites or are within easy walking distance of the best-known sights in central Berlin. Visitors with a cheap transportation card, may enjoy taking bus 100 all the way to its terminus and then return to sights that are of particular interest. Otherwise, bus 100 requires a standard Berlin AB ticket — €3.

Bus 100 in the Former West Berlin

Bus 100 departs from Zoologischer Garten train station in the heart of the former West Berlin. From here, it passes by the Kaiser Wilhelm Gedächtniskirche (Emperor Wilhelm Memorial Church) before heading to Tiergarten, a 714-acre park and green lungs of the center of Berlin. Inside and on the edges of the park bus 100 passes by the Victory Column – moved here by the Nazis in anticipation of victory parades to come – Schloss Bellevue, the modern Chancellery, and the Reichstag (German parliament) with its huge Norman Foster-designed glass dome. (The Reichstag now requires free advance reservations.)

Book Reichstag and Berlin guided tours through Get Your Guide 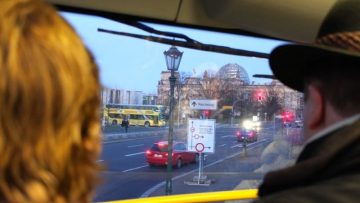 The Brandenburg Gate was finally closed to traffic after its last restoration. However, this famous Cold War symbol as well as the Adlon Hotel can be seen just as bus 100 turns onto Unter den Linden, traditionally Berlin’s most fashionable address. The Stalinist architecture of the Russian Embassy is still adorned by some hammer and sickles detailing but obviously flies the Russian tricolor rather than the red Soviet standard.

At the far end of Unter den Linden are several classical buildings including those of the Humboldt University (former students include Marx, Engels, and Lenin, while Einstein taught here), the German National Opera (one of three opera houses in Berlin), and the New Guard (Germany’s official memorial for the victims of war and tyranny). The late 17th-century Zeughaus (Armory) is the oldest building on the boulevard and suitably houses the very interesting and comprehensive German Historical Museum. Its ultra-modern IM Pei-designed annex has excellent temporary exhibitions.

Bus 100 now enters Museum Island in the Spree River. Museumsinsel is a UNESCO World Cultural Heritage site with some of the finest museums in the world. The most popular are the Pergamon and Neues Museum. Despite its Renaissance appearance, the Berliner Dom (Cathedral) is just over a century old. The former Prussian Palace (Berliner Schloss) was rebuilt and opened in 2021 as the Humboldtforum with the ethnological and Asian art collections and several futher major temporary exhibitions.

Bus 100 in the Heart of the Former East Berlin

Along Karl-Liebknecht Street is the 368-m (1,178-ft) Fernsehturm – a television tower built by the East Germans with Swedish technology in the 1960s. It is the tallest structure in Germany and the Telecafé revolving restaurant at 207-m (662-ft) offers the best views of Berlin (and a trip back to 70’s chic).

After about half an hour, bus 100’s journey ends at Alexanderplatz, a huge square that was the heart of East Berlin during the communist years. It is once again lively but mostly due to its important transportation hub and large shopping centers where Berliners outnumber tourists by far.