The historic Town Hall in Gouda, one of the oldest Gothic stadhuizen in The Netherlands, is at the center of the Markt and weekly outdoor cheese market. 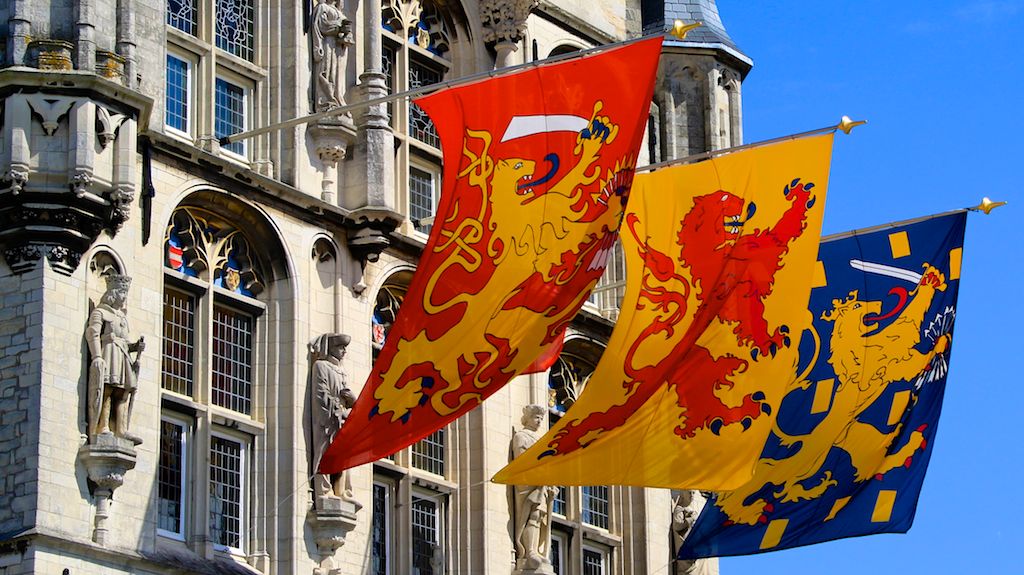 Gouda, famous for its cheese, is also worth visiting for its 350 rijksmonumenten (national monuments). At the heart of the old town is one of the most impressive monuments – the mid-fifteenth century Gothic Stadhuis (town hall). It is one of the oldest and most impressive Gothic secular buildings in The Netherlands. The old town hall building absolutely looks the part with sculptures, flags, a clarion and colorful shutters. It is well positioned at the center of Gouda’s Markt – one of the largest market squares in Holland and scene of a weekly tourist-orientated cheese market. It is hard to visit Gouda without seeing this center of civic pride. The interior is worth exploring too with lovely views of the surrounding buildings from higher floors.

The Stadhuis of Gouda in South Holland

The Gothic Goudse stadhuis was already in use by 1450 but many alterations have been made through the centuries. Originally, the town hall was surrounded by a water moat but since 1603 the stadhuis has been without barriers at the center of the triangular Markt, one of the largest market squares in The Netherlands.

Notable 17th-century Renaissance additions are the staircase leading to the entrance as well as the balcony at the rear of the building. Up to 1860, the latter was used as a scaffold (schavot). The doors connecting it to the city hall were only added in 1897 to allow Queen Wilhelmina to waive to the crowds from here – sending her up on the regular external ladder like a criminal was simply not on!

Traditionally, after a court case, the guilty had to leave the town hall via the left staircase and proceed along the length of the building to the scaffold at the rear, while the innocent used the right staircase. Wedding couples are still advised – to ensure good luck – to use the right stairs after the civil ceremony.

The statues on the front of the town hall date only from the 1950s and are mostly 16th-century Burgundian rulers – before The Netherlands fell to the rule of the Habsburgers (mostly from Spain). Two of the older statues are now in the garden of the Gouda Museum. 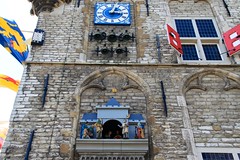 The carillon (klokkenspel) with story on the side of the stadhuis is similarly only from the 1960s. The puppet play illustrates Count Floris V leaving his castle in 1272 to grand the people of Gouda a city charter (stadsrechten). It plays two minutes after the hour and half hour.

On the balcony below the glockenspiel, minor offenders were put on public display as punishment. (The Gouda Museum has a large selection of torture and execution implements used in more serious cases.)

Seeing the Interior of the Goudse Stadhuis 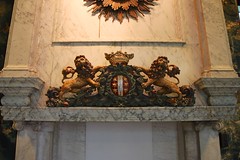 The interior of the old town hall of Gouda is mostly from the 17th and 18th century. Visitors are allowed to peak through any unlocked door and photograph freely without flash.

The town hall has numerous paintings, drawings, statues and especially impressive reliefs with highly symbolic images. Gifts presented to Gouda are shown in the various vitrines. Many painting of long-forgotten mayors still hang all over the place. 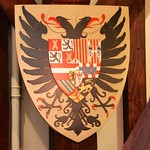 The family insignia of the various rulers of Gouda are also on display. The complexity of the coat of arms of the Habsburg rulers indicates in part the family politics and inbreeding that brought much of Europe under their control but ultimately resulted in mentally and physically stunted rulers.

The Wedding Hall in the Goudse Stadhuis 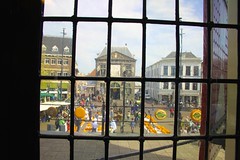 Nowadays, the main function of the old town hall is as trouwzaal (civil wedding hall). The trouwzaal has important historic chairs but the most impressive decoration is the huge 17th-century tapestry commemorating the visit of Queen Henrietta Maria of France (the wife of King Charles I of England) with her daughter Mary Stuart and son-in-law Willem van Orange Nassau (later Willem II of Holland and father of William III of both Holland and England).

The doors from the wedding hall lead outside to the balcony – previously used as scaffold – with a view of the market square and De Waag. De Waag was used to weigh produce and now has a small cheese museum. For centuries it determined the height of surrounding buildings – they had to be a specific length shorter. 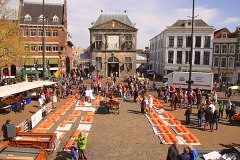 Gouda is one of the most produced cheeses in the world. On summer Thursdays, an outdoor show cheese market is held on the Markt between the stadhuis and De Waag.

Gouda is not an AOC protected label allowing Gouda cheese to be produced anywhere in the world. “Gouda Holland” indicates that the cheese is produced in The Netherlands from Dutch milk but not necessarily in or even near Gouda. 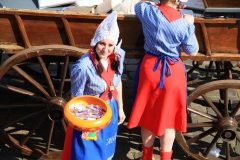 The show cheese market is aimed squarely at tourists but is fun and does add color to the town. It is held usually on Thursday mornings from 10 am to just after noon from April to August. There are a few gaps in the program – enquire from the Gouda Tourist Information Office to avoid disappointment.

Free Gouda cheese samples are often given to tourists but cheese can be bought very cheap from regular market stands – buying a full 60-kg wheel is optional.

Opening Hours and Tickets for the Gouda Town Hall 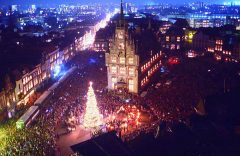 The interior of the Stadhuis van Gouda is open Tuesday to Sunday from 10 am to 5 pm. Sightseeing may be limited during wedding ceremonies, which is the principle remaining civil function of the old town hall. Admission is €2.50 (free for children).

Apart from enjoying the market and restaurants on Markt, a visit to the interesting Gouda Museum and the marvelous stained-glass windows of the Sint Janskerk combines well with seeing the stadhuis.