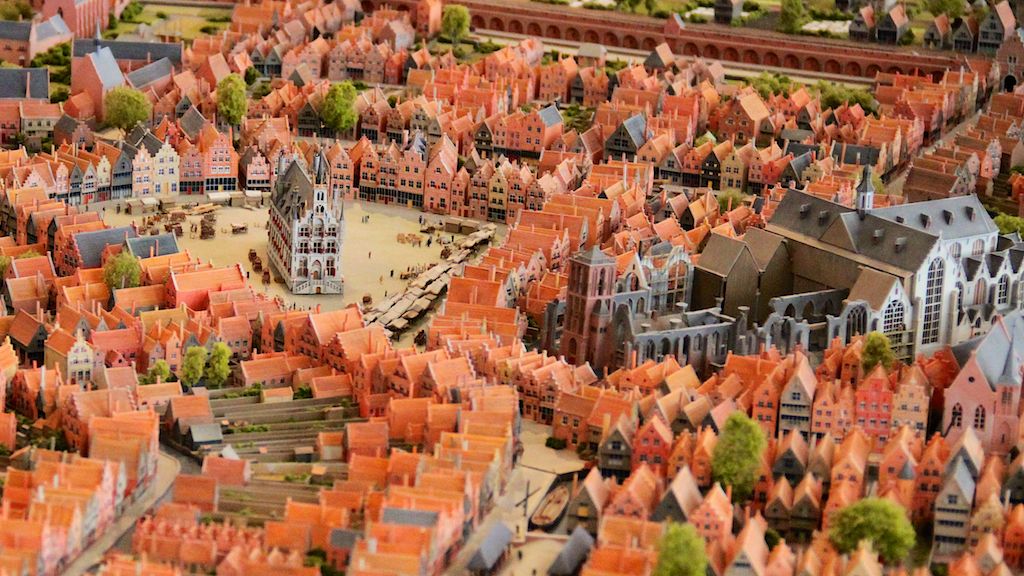 The Museum Gouda is a local history museum located inside a former hospital across the alley from the St Janskerk in the heart of Gouda. The museum has an eclectic collection that will satisfy the curiosity of most visitors. Particularly interesting is the huge scale model of Gouda in 1562, local ceramics, large militia paintings, the “secret of Gouda” cartons of the St John’s Church stained-glass windows, and a collection of torture equipment. Activities can keep children occupied while parents enjoy the formal displays. 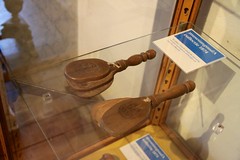 The Museum Gouda focuses on art and historic items directly related to the town and region. The museum is located in a former hospice – the Catharina Gasthuis – partly from the 14th century.

Although the emphasis in the Gouda Museum is on the town and immediate vicinity, visitors from further afield will also find many items to enjoy. The highlights of the museum are mostly in the larger rooms while the paintings and other items in smaller rooms are of more specific interest. Most items are fully described in both Dutch and English. 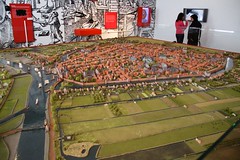 When entering the museum from the Acher de Kerk entrance behind the Janskerk, the first room contains a huge 1:350 scale model (marquette) of Gouda as it was in 1562. The town hall (stadhuis) at the center of the Markt market square is easy to identify. Also note the Janskerk – the nave of the longest church in The Netherlands was still being built at this stage. 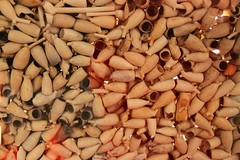 Adjacent is the Schatkamer (treasury) with a huge collection of odds and ends. The collection here includes paintings, applied arts, as well as clay pipes – a product Gouda was famous for.

The Museum Gouda has a collection of over 40,000 items – the treasury and a second depot allow the museum to display up to 40% of the items, even if many are not described while in these storage rooms.

Paintings in the Museum Gouda 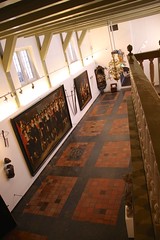 The Gouda Museum has a large collection of paintings from the 19th century of the Haagse (Hague) and Barbizon schools that are probably of lesser interest to many foreign visitors. Temporary exhibitions may add further interest.

Easier to enjoy are the large Schuttersstukken – large paintings depicting the city guards (The Night Watch by Rembrandt in the Rijksmuseum in Amsterdam is certainly the most famous in this genre). Gouda had such a city militia from the 14th century until Napoleon dismissed it in 1795.

The museum has a large collection of Gouds plateel – ceramics and earthenware resembling porcelain made in Gouda. Children may freely decorate a large clay pot while parents enjoy the museum pieces.

Religious Art in the Museum Gouda 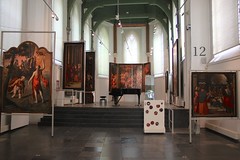 The Museum Gouda also has a very interesting and unique collection of religious art. Beeldenstorm (religious fury, or literally translated storming of the statues) was big during the Reformation in The Netherlands. Religious art from before the 16th century is thus often rare in Holland.

The St Janskerk in Gouda famously preserved its stained-glass windows. However, uniquely the 16th-century cartons used to make the windows survived – the largest collection of its kind in the world. 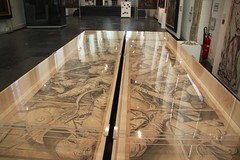 These cartons are referred to as Het geheim van Gouda (the secret of Gouda), as they are generally not shown to the public. The Museum Gouda exhibits two of these cartons, which are up to 20 m tall, in the former chapel of the Katharijn Gastehuis with the selection rotating every three months to preserve the integrity of the works.

Also in this section of the museum is a large collection of altarpieces and other religious art. These works either survived the Reformation or came from secret churches used by Roman Catholic communities. (These “secret” churches were often allowed openly, as long as it was not possible to recognize the churches as such from the outside of the buildings and a fee was paid to the town council.)

Torture Implements in the Museum Gouda 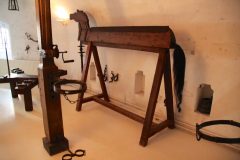 A door from the chapel leads down to the cellars – room 13 – where the museum’s collection of torture equipment (martelwerktuigen) is on display. Visitors, especially children, are encourage to don special glasses and use an ultraviolet flashlight to lit up the descriptions (mostly in Dutch) and further illustrations of how the implements were used.

Also in the cellars is the best-preserved dolcel in Holland. The dolcel (literally, crazy cell) was used to lock up safely people considered dangerously mad.

The Museum Gouda is housed in the historic Het Catharina Gasthuis – a shelter for the poor and homeless dating in part back to the fourteenth century. A few rooms and exhibits reminds of its role as hospice and later as hospital until the early 20th century.

The Aphotheek is a typical historic pharmacy with fittings and fixtures from 1790.

The Chirurgijnsgildekamer – surgery guild room – has several historical medical instruments on display. Some items include clappers that lepers had to use to warn people, as well as a tobacco enema machine – standard equipment in any doctor’s bag and commonly used on drowning victims up to the mid-19 th century.

In the passage outside this surgery hangs a painting by Jan Steen – he had a low opinion of doctors in general and kwakzalvers (quacksalvers) in particular. (A similar Steen painting is in the Rijksmuseum in Amsterdam.)

The Museum Gouda is family friendly with many activities for children. Many exhibition halls have opportunities for children to do a puzzle or decorate a pot while parents can look in peace at the displays.

A special large room is available on the ground floor (near the toilets and Oosthaven entrance) for children to play with a variety of objects, dress up or to make some drawings or crafts while parents enjoy the rest of the museum.

Garden of the Gouda Museum

The museum garden is open for free across the alley from the St Janskerk. The garden has several historic and modern statues while further historic objects are on display in glass cases.

One of the entries to the garden is via the Lazaruspoortje, which was the entrance to a hospice housing sufferers of leprosy. It has a relief showing the biblical story of Lazarus and lepers with the clapper and personal alms bowl and drinking can, as was prescribed in the early 17th century.

The small café has a lovely terrace ideal for enjoying drinks or lunch on sunny days. 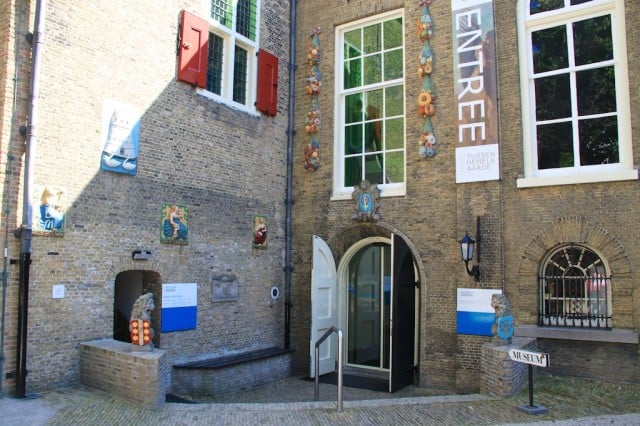 The Museum Gouda is open Tuesday to Sunday from 11 am to 5 pm. The museum is open on most holidays (including Mondays) but close on January 1, Kings’ Day, and December 25.

Admission to the Museum Gouda is €8 (€2 for children 5 to 17). The Dutch Museum Pass (museumkaart) is valid. 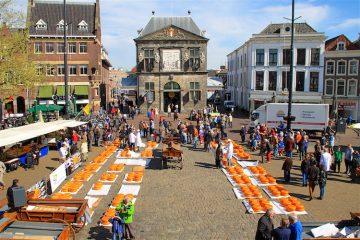 Museum Gouda is at Achter de Kerk 14 – directly behind the St Janskerk (St John’s Cathedral). A second entrance is at Oosthaven 9.

A visit to the Museum Gouda combines well with seeing the Goudse Glazen (stained-glass windows) in the adjacent St Janskerk (St John’s Church), as well as the Gothic historic Gouda town hall (stadhuis) on the large Markt where the show cheese market is held summer Thursday mornings.