Visitors to romantic Château de Chenonceau can see the magnificent palace and gallery spanning the Cher River, formal gardens and a maze.

Château de Chenonceau is the most popular castle to visit in the Loire region of France. Visitors crowd into the small but beautifully restored palace with its famous gallery spanning the River Cher on an arcaded bridge. Chenonceau is also famous for its formal gardens laid out for Diane de Poitiers and Catherine de Medici. A maze and park may also freely be explored by visitors to the most popular privately owned monument in France. 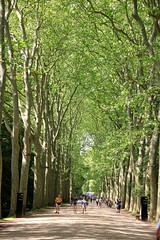 Visitors to Château de Chenonceau can generally not even get a free glimpse of the magnificent palace from the main entrance. It is a pleasant walk along a long tree-lined avenue from the entrance gate before the formal gardens and Renaissance palace are revealed.

Only at the end of the avenue can Château de Chenonceau be seen with its separate medieval keep and the Renaissance palace. However, the famous gallery across the Cher still remains hidden but reveals itself beautifully from either the formal gardens of Diane de Poitiers (to the left) or the smaller garden by Catherine de Medici (to the right behind the Orangerie and self-service restaurant). 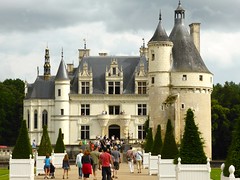 Château de Chenonceau is small and can get very crowded inside during busy times. Rooms are lightly furnished but with some notable artworks on the walls and large fresh flower arrangements in many rooms. Free wifi inside the chateau adds a modern touch.

The chateau can be visited with an audio-video guide but the free pamphlet is more than sufficient for most.

Most of the gardens and ground floor of Chenonceau Chateau are accessible to wheelchair users. 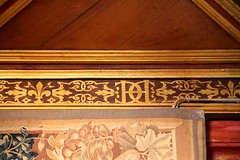 The medieval keep, separate from the main Renaissance palace, is also referred to as the Marques tower, after the fifteenth-century owner and builder of the tower. Note the salamander and inscription reminding of Francis I, who confiscated the chateau in 1535 for the crown.

In the guards’ room note the intertwined Cs of Catherine de Medici as well as sixteenth-century tapestries. The chapel has modern stained-glass windows but the English graffiti is blamed on the bodyguards of Mary Queen of Scotts, who stayed here in the 1540s. 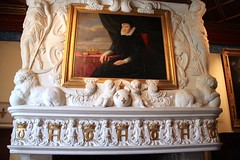 In the bedroom of Diane de Poitiers (mistress of Henri II), Catherine de Medici (wife of Henri II) had her double C and her husband’s H engraved on the fireplace and coffered ceiling. However, note how the C&H combined add an unintended D for Diane. Catherine did not sleep here – she had her bedroom installed on the second floor.

The green study, from where Catherine de Medici ruled France as regent has paintings by amongst others Tintoretto, Jordaens, Veronese, Poussin, and Van Dyck. Further old masters can be enjoyed in the small library, which offers some of the finest views from the chateau.

The Gallery of Château de Chenonceau 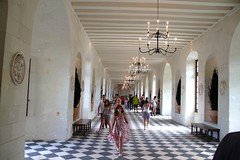 A narrow passage leads to the gallery Catherine had built on top of Diane’s bridge. This gallery measures 60 by 6 meters and is lit by 18 large windows. It was a famous party venue where Catherine de Medici entertained and spied on the French nobility.

Many of the statues that filled the niches were sold to Louis XIV and are now at Versailles. Note the uneven floor: the white tufa tiles wear faster than the harder black slate.

During the First World War, the gallery was used as a hospital, while it was a bridge between German-occupied and Free Vichy-France during the early years of the Second World War.

Visitors can usually exit the chateau at the opposite end for some of the finest views of the chateau and gallery. Don’t lose the token for readmission or it is a very long walk back to the main entrance. 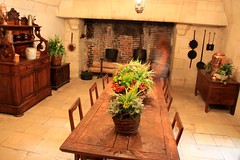 Before returning to the formal reception rooms, view the kitchens in the large bases forming the first two piers of the chateau. Narrow stairs lead down to the kitchen, pantry, and other rooms used by staff. The kitchen equipment dates mostly to the First World War period.

Back on the ground floor, Francois I’s drawing-room is lavishly decorated with rich wallpaper, a fine Renaissance fireplace, and paintings. These include a self-portrait by Van Dyck and a painting by Van Loo featuring three mistresses of Louis XV. 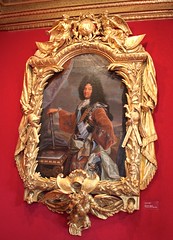 The adjacent Louis XIV’s drawing room features a large painting of the Sun King in a huge gilded frame. Louis XIV actually visited Château de Chenonceau (on 14 July 1650). The Rubens once belonged to Joseph Bonaparte – once king of Spain by grace of his more famous brother Napoleon. The salamander of King Frances I, which also features prominently at Chambord, Blois, and other Loire castles, is used on the fireplace and reminds that the castle became royal property during his reign.

The staircase leading to the upper floor is considered amongst the first Italian straight staircases to have been built in France. Here the Katherine Briconnet’s Hall is decorated with 17th-century tapestries as well as marble medallions of Roman emperors that Catherine de Medici brought over from Italy.

The lavishly decorated Five Queens’ Bedroom features 16th-century Flemish tapestries and a small Rubens. This room was used – at different times – by five queens: the two daughters of Catherine de Medici – Queen Margot (wife of Henri IV) and Elisabeth of France (wife of Philippe II of Spain), and her three daughters-in-law: Mary Stuart (wife of Francois II and Queen of Scots), Elisabeth of Austria (wife of Charles IX) and Louise of Lorraine (wife of Henri III).

Catherine de Medici’s bedroom had views of the River Cher and the gallery. Off this bedroom, like the floor below, are two further small rooms with grand views and a variety of paintings and drawings of Château de Chenonceau through the centuries.

Two further lavish bedrooms on this floor belonged to Gabrielle d’Estrées and her son Cesar of Vendôme – the son of Henri IV and uncle of Louis XIV. Both rooms have splendid tapestries and period furniture. 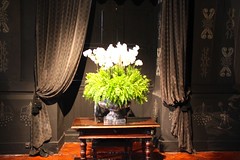 On the top floor are a less lavish hall and the bedroom of Louise of Lorraine. She spent her last years in mourning here after a monk assassinated her husband, Henri III, in 1589. The ceiling is original.

The chateau and formal gardens are the main attractions of Chenonceau. However, visitors may also explore the rest of the park, vegetable and flower gardens, and a 16th-century farm. A small Wax Museum explores the history of Chenonceau through 3D paintings and wax figures.