Rail&Fly is a train ticket deal between Deutsche Bahn and some airlines (including Lufthansa) for cheap train transportation to German airports. 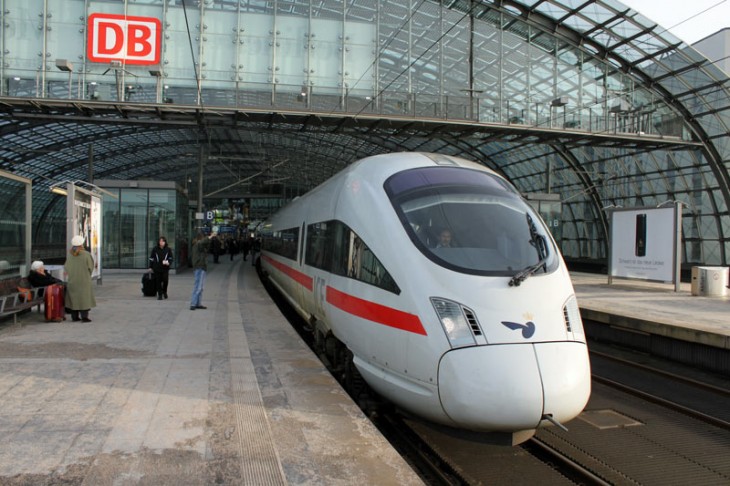 Passengers on international flights can save on train transportation from and to airports in Germany when using the special Rail&Fly train ticket. Rail & Fly allows passengers on international flights to continue their journeys from the airport to any train station in Germany for a mere €34 (€66 in first class). Lufthansa, Eurowings, American, United and many other airlines participate in the Rail&Fly program while British Airways, EasyJet, and Ryanair do not offer passengers this cheap train to airport transportation ticket on flights to Germany.

Rail&Fly ticket holders pay only €34 (€66 in first class) for train transportation between any airport and any of more than 5,600 railway stations in Germany. This is a superb deal for passengers that qualify: one-way ICE full-fare tickets from Frankfurt International Airport to other German cities are for example €67 to Stuttgart, €73 to Cologne (Köln), €108 to Munich (München), and €133 to Berlin. In fact, €34 will only get travelers to for example Heidelberg, Limburg or Würzburg on a full-fare one-way train ticket from Frankfurt Airport.

Not all travelers qualify for Rail&Fly savings. Rail&Fly tickets are sold only by participating airlines and not by German Railways. These airlines may add further conditions to the purchase and use of Rail&Fly tickets – see below.

Basic conditions of the Rail&Fly train to airport ticket in Germany include:

Individual airlines use different kinds of tickets. A physical ticket is commonly available but some use a numbered voucher that must be exchanged for a ticket at a DB train ticket vending machine in Germany. (Ticket collection is possible within 72 h prior to the initial journey.) Increasingly, tickets can be printed at home like any plane e-ticket or used as a mobile ticket.

Children under 6 usually travel for free on Deutsche Bahn trains, as do children up to 14 when accompanied by a parent or grandparent and confirmed on the ticket at time of purchase. However, with Rail&Fly airlines may place their own conditions on accompanying children. Lufthansa for example allow free travel on Rail&Fly for children under 2 years only, 50% discount for 2 to 11 years and full fare for children over 12.

Rail&Fly tickets are not sold by Deutsche Bahn but rather directly by the airlines (and major German tour operators). The Rail&Fly tickets must usually be added during the initial flight booking process whether it is done online or through a travel agent. Eurowings is one of very few airlines that allow Rail&Fly tickets to be added at a later stage.

For travelers not qualifying for Rail & Fly tickets, Deutsche Bahn has many further savings deals that may help to reduce the price of traveling to the airport in Germany, especially when only regional trains are used, e.g. Ländertickets, Bahncard savings, and German Rail passes for foreign tourists.