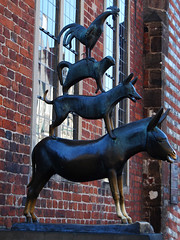 Bremen Airport is a regional airport served by both low-cost carriers and full-service airlines on the North Sea Atlantic Coast in the northwest of Germany. Major European airlines including Lufthansa, Air France, and KLM have flights to Bremen Airport from their main hubs. However, low-cost airlines have a presence at Bremen Airport too with Ryanair particularly active. Low-cost and charter flights are also available to popular Mediterranean holiday destinations.

Lufthansa has daily from Bremen up to five flights to Frankfurt (FRA), eight to Munich (MUC), and four to Stuttgart (STR). Lufthansa often have special €99 return fares on offer.

Bremen Airport is a mere 3.5 km (2.2 miles) from the center of Bremen allowing for easy and fast transportation. Tram (Straßenbahn) Line 6 takes only 17 minutes from the Hauptbahnhof to Bremen Airport at a cost €2.10. During peak hours, trams depart every 10 minutes but half-hourly on Sunday and at night.

Taxis from Bremen Airport take only about 20 minutes to downtown at a cost of just over €10. Suntransfers  gives instant online quotations without requiring much details.

By car, use autobahn A1, exit Arsten, and follow the signs.