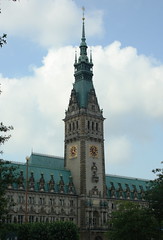 From Hamburg Airport, over a hundred destinations can be reached on non-stop flights on both full-service and low-cost airlines. Low-cost airlines and charter flights allow for cheap flights to Hamburg although even traditional full-service airlines, including Lufthansa, often have special cheap tickets and deals during quiet periods.

Hamburg Airport (HAM) is used by both low-cost airlines, such as Air Berlin, Easyjet, Flybe, Germanwings, and TUIfly, as well as by traditional full-service carriers such as Lufthansa, British Airways, Air France, and KLM. Special deals are often available on these airlines – compare offers on different internet ticket reservation services and often it is worth checking on airlines own websites too for last-minute internet-only deals.

Healthy competition often brings ticket prices down, e.g. on the Hamburg to London route, flights are offered by several airlines to different London airports. Both British Airways and Lufthansa fly from Hamburg Airport to London Heathrow (LHR) allowing for good internet deals on slow-selling flights. However, low-cost airlines sometimes fly passengers for a fifth of the price (but watch for the long list of separately charged-for services) to London Luton (Easyjet) or London Gatwick (Germanwings). (Low-cost airline Ryanair sells flights from Stansted to Lübeck (LBC) as if flying to Hamburg.)

Cheap Flights from Hamburg Airport (HAM) on Other Low-Cost Airlines

Getting to Hamburg Airport (HAM), Germany

Transportation from downtown Hamburg to Hamburg Airport by train became very easy with the recent opening of the final stretch of the S-Bahn train line to the airport. S-Bahn line S-1 runs from the airport every 10 minutes in 23 minutes to the Hauptbahnhof. Note on the train to the airport, use only the front three wagons as the train splits before reaching Hamburg Airport.

Buses are also available directly from Hamburg Airport to Kiel, Lübeck, and Hannover.