Lübeck Airport (LBC) in Northern Germany is an alternative for cheap flights with low airfares to Hamburg on low-cost budget airlines Ryanair and Wizz Air. 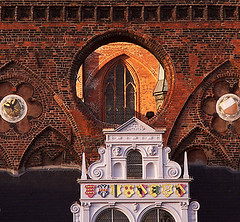 Lübeck Blankensee Airport (LBC) is a small regional airport near the Baltic Sea town Lübeck. Flughafen Lübeck Blankensee is mostly used by low-cost airlines such as Ryanair and Wizz Air as an alternative airport to Hamburg (HAM). Although most passengers on cheap flights to Lübeck-Blankensee are probably heading towards Hamburg, many travelers would also enjoy the beautiful old town of Lübeck, a UNESCO World Cultural Heritage site.

Lübeck Blankensee Airport (LBC) is just 7 km (4.3 miles) south of the center of Lübeck but around 60 km (37 miles) to the east of Hamburg. Currently, only low-cost airline Ryanair and Wizz Air have flights to Lübeck and generally advertised the flights as going to Hamburg.

Public transportation is available to Lübeck-Blankensee Airport (LBC) with special buses to Hamburg often the preferred method of transportation.

From Lübeck Airport to the center of Lübeck takes around 10 minutes by car. Hamburg is just over half an hour away using highway B207 and autobahns A20 and A1. The Baltic coastal towns of Wismar can be reached in an hour, while Kiel and Rostock are around 90 minutes away. Airport parking – both short and long term – is very cheap.

Bus line 6 goes from the Airport to Lübeck bus and train station in around 23 minutes. The bus runs every 20 minutes (every 30 minutes at night and on weekends). Tickets are €2.25 one-way.

Airport bus A20 connects Lübeck Airport and Hamburg Central Bus Station (ZOB) near the Hauptbahnhof in 75 minutes. (Traveling time will be reduced dramatically when a new road opens early 2008.) Bus departures are timed according to flight departures and arrivals – the bus generally waits for passengers to clear the terminal before departing. One-way fares are €8, children under 5 free. Tickets are only available from the driver – euro cash only.

Lübeck Airport currently cannot be reached by train. However, a new station is scheduled to open at Lübeck Airport on the Lüneburg-Lübeck railway line, which should improve access to airport from Lübeck with good railway connections to Hamburg, Kiel, and Berlin.

The number of flights to Lübeck Blankensee Airport (LBC) is limited but the price is often right. Other airports in Northern Germany include Hamburg (HAM), the most logical alternative when traveling to Lübeck and very much the first choice if the Hanseatic City of Hamburg is the actual destination.