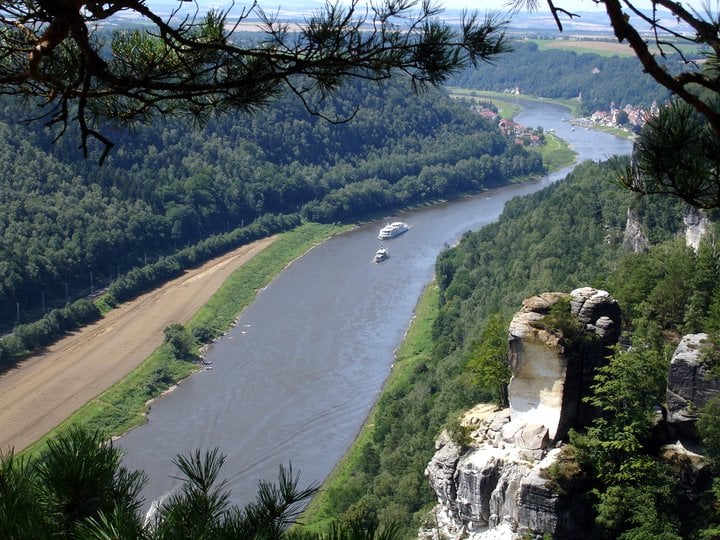 The Elbe is after the Rhine and Danube the most popular river in Germany for riverboat cruises. The attractions of Elbe riverboat cruises are the cultural sights along the river and nearby destinations – numerous UNESCO World Cultural Heritage listed sites can be seen along the river or on easy excursions. Nicko Tours, Viking River Cruises, Trans Ocean and Phoenix are the main cruise lines offering regular luxury riverboat vacations on the Elbe River. The most popular cruising route is Berlin / Potsdam past Magdeburg and Dresden to Melnik and Prague.

Cruising on the Elbe River in Germany and the Czech Republic

The Elbe River (Die Elbe in German, Labe in Czech) is around 1091 km (680 miles) long. Its source is in the Giant Mountains in the northern Czech Republic and its mouth in the North Sea at Cuxhaven near Hamburg, Germany.

Several routings are possible on the Elbe and its tributary rivers such as the Moldau (Vltava) and the Havel. The Elbe is navigable by reasonably large riverboats from its mouth to Nymburk (Neuenburg) in the Czech Republic.

The main cruises season on the Elbe River is from April to October. However, a few cruises are possible outside this period with cruises around Christmas and New Years increasingly popular.

Hamburg with 1.7 million inhabitants is the largest city on the Elbe. During the Second World War, Hamburg was extensively bombed and is therefore a mostly modern city but several historic brick-Gothic churches were restored. The city also have very interesting museums and with the Reeperbahn one of the most famous nightlife and red-light districts in the world. The Beatles shot to fame here.

Magdeburg has several Romanesque buildings and claims that its thirteenth-century cathedral was the first Gothic cathedral (as oppose to an ordinary church) built in Germany.

Riverboats cruising down the Havel-Elbe Canal from Berlin and Potsdam enter the Elbe at Magdeburg. Most boats go upstream towards Dresden rather than downriver to Hamburg.

Nearby Lutherstadt-Wittenberg is inscribed on the UNESCO World Cultural Heritage list for several monuments and buildings associated with the church reformer Martin Luther.

Torgau is where the American and Russian armies met on April 25, 1945 – photos were taken only a day later.

Meißen is famous as the home of Meissen Porcelain, the impressive Albrechtsburg castle, and a lovely old town. Popular excursions go to Moritzburg, a romantic palace.

Dresden is a former UNESCO World Heritage sight with numerous restored Baroque and Renaissance monumental buildings, excellent museums, and the Semperoper opera house. (Dresden lost UNESCO heritage status due to the construction of a new bridge across the Elbe.)

Saxon Switzerland (Sächsische Schweiz) has the loveliest nature on the Elbe. Here the Elbe flows through an area with oddly shaped sandstone hills, pillars, and rocks. Popular sights include the Bastei viewing point and Festung Königstein, the largest hill fortress in Europe.

Riverboat Cruises on the Czech Elbe (Labe) and Vltava (Moldau)

Cruising on the Elbe River (Labe) is a popular addition to the German part of the river. Although cruises commonly ends at Melnik, or turn here up the Vltava to Prague, it is possible to cruise deeper into the Czech Republic on the Elbe itself.

Melnik , near the Czech-German border, is at the confluence of the Elbe and the Vltava (Moldau in German), the largest tributary. Riverboats can cruise up the Vltava to Prague but many cruise lines end the riverboat cruise in Melnik and transport passengers by bus to Prague with its UNESCO World Cultural Heritage listed old town center.

The most common cruise route on the Elbe River is from Magdeburg to Melnik, some companies cruise all the way to Potsdam and Berlin or to Prague. A few cruises per year go the full length of the navigable Elbe.

Viking River Cruises’ MS Schumann and MS Fontane do the Magdeburg to Melnik cruise weekly from March to September. This cruise is usually sold in the international market as Berlin to Prague with hotel stays and bus transfers to the boat added at each end of the cruise.

Viking River Cruises in Germany uses the MS Swiss Ruby for weeklong cruises from Berlin to Prague, or return with the full duration of the vacation on the boat.

Nicko Tours use the Katharina von Bora and Frederic Chopin (both former Peter Deilmann riverboats) for the weeklong cruises from Potsdam to Prague or return.

Phoenix Reisen uses the Saxonia for longer cruises – usually 9 to 12 days – and various permutations for return cruises from Potsdam to the Elbe and back.

Trans Ocean’s luxury Sans Souci follow various itineraries with the boat sometimes going all the way to Cuxhaven and Hamburg.

Nicko Tours offer a weeklong Czech Republic only cruise on the MS Florentina. The cruise departs down the Vltava (Moldau) from Prague, turn onto the Elbe at Melnik and cruise upriver to Nymburk (Neuenburg) and Podiebrad before retuning to Prague.

Nicko Tours, which took over most of Peter Deilmann’s riverboats and cruise routes in 2010, is currently the largest cruise line operator on the Elbe River. Viking River Cruises also operate several boats on the Elbe, while Phoenix Reisen, Trans Ocean and Croisieurope also have boats on Germany’s third largest cruising river.

See Best Luxury Riverboat on the Elbe for more details on the boats that currently cruise on the Elbe and its tributaries.