Eichstätt has an Italian Baroque style old town, an interesting cathedral, a copy of the Holy Sepulcher, and unique Altmühl Valley fossils in the Jura and Bergér Museums. 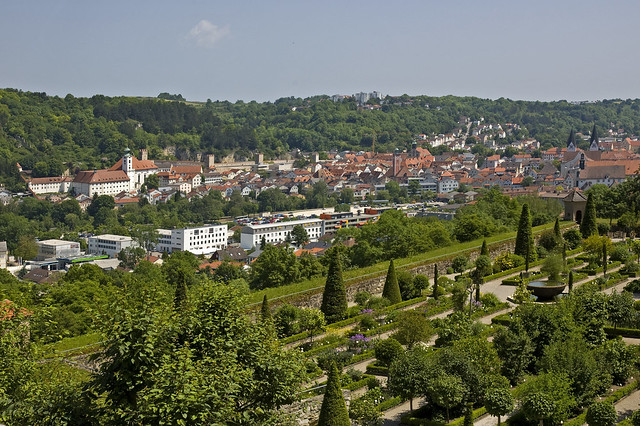 The Episcopal town Eichstätt has a history going back to 741 when St Boniface founded a monastery here. During the Thirty Years’ War, three quarters of the town was destroyed allowing Eichstätt to be rebuilt during the 18th century in an Italian Baroque style.

Following secularization in 1802, the bishopric became part of Bavaria. Almost a third of the town’s population of 14,000 is students at the local university, the only Catholic one in the German-speaking world.

Following the destruction of Eichstätt in 1634, most buildings were rebuilt in the newly fashionable Baroque style but on medieval foundations. The presence of mostly Italian building masters such as Gabriel de Gabrieli and Maurizio Pedetti gave the town’s architecture a southern European flair unknown in Franconian towns further north.

Despite the Baroque splendor of most of the town, the most important building is the much older Dom (Cathedral), which contains elements of all major architectural movements from its Romanesque origins to the Rococo. The two towers are Romanesque and while most of the main structure is 14th-century Gothic, the western façade is Baroque. The interior also mixes styles with the Late Gothic Pappenheim Reredos at close to 9 m/30 ft and the Renaissance statue of a seated St Willibald, the first local bishop, the most important works of art.

The two-story cloisters were added around 1425. Despite the somewhat grim name, the Mortuarium (Mortuary or Funerary Chapel) is a well-lit masterpiece of fine, intricately carved Late Gothic architecture. It has a row of individually carves pillars and columns while the floor is mostly tombstones. The four stained-glass windows in the west wall are by Hans Holbein.

The Domschatz- und Diözesanmuseum (Treasury and Diocesan Museum), Residenzplatz 7, tel 08421-50-742, are on the second level above the chancel. It has the usual collection of reliquaries, religious art, and vestibules including the 12th-century St Willibald’s chasuble. Opening hours are April to early November, Wednesday to Friday from 10:30 am to 5 pm and weekends from 10 am to 5 pm. Admission is €2, free on Sunday.

The Residenzplatz (Residence Square) with a Mariensaüle (Virgin’s Column) is surrounded by Rococo buildings. The former Residenz (Bishop’s Residence), Residenzplatz 1 (Landratsamt), tel 08421-70-202, is now used by the local government but parts of the splendid interior can be seen on guided tours, which include a grand staircase and the Spiegelsaal (Hall of Mirrors) with stuccowork not only on the ceiling and walls but on the mirrors themselves. Tours are from Easter to October, Monday to Thursday at 11 am and 3 pm, Friday at 11 am, weekends at 10.15, 11.00, and 11.45 am as well as at 2, 2:45 and 3:30 pm. Admission is €2.

Toward the east of the old town, in a former monastery, is the Informationszentrum Naturpark Altmühltal (Information Center), Notre Dame 1, 85072 Eichstätt, tel 08421-98-760. It has information on the nature park including exhibitions on the local flora, fauna, geology, and history. The church is by Gabrieli and often used for concerts. It is open from April to October, daily from 9 am to 5 pm (Sunday from 10 am only) and from November to March weekdays from 8 am to noon and 2 to 4 pm (Friday mornings only). Admission is free.

Further east, beyond the bishop’s former Sommerresidenz (Summer Residence), now used by the university administration, and the Hofgarten (Court Garden), is the Kapuzinerkirche zum Heiligen Kreuz und Heiligen Grab (Capuchin Church of the Holy Cross and Holy Grave), Kaupzinnergasse 2, tel 08421-934-880, a 17th-century Baroque church with an accurate copy made in 1160 of the Holy Sepulcher in Jerusalem.

Top Fossil Museums in the Outskirts of Eichstätt, Bavaria

At the opposite bank of the Altmühl, on a hill in the inside of an almost complete U-bend of the river, is the Willibaldsburg, Burgstraße, tel 08421-4730, a castle that was under construction from the 14th to the 17th century. The main section is the work of famed Augsburg Renaissance architect Elias Holl. For fine views, climb the 100 steps to the top of the tower. The Tiefer Brunnen (Deep Well) of 76 m/250 ft claims to be the deepest hand-carved well in Europe. 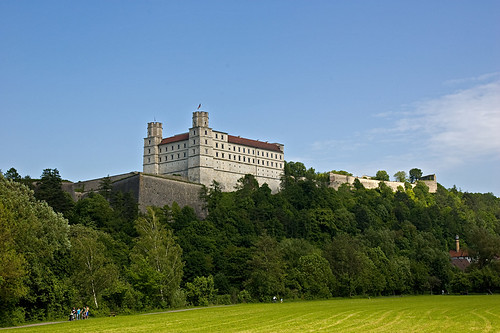 Opening hours for both museums are Tuesday to Sunday from April to September from 9 am to 6 pm and October to March from 10 am to 4 pm. Admission is €4.

The Bastion Garden, which is modeled on the famous Renaissance garden Hortus Eystettensis, is open for free during the same hours.

A bit further away in the suburb Harthof, is the Museum Bergér, Harthof 1, tel 08421-4663, an important private fossil collection near the Blumenberg quarry. It has several impressive examples from the Jura period including a predatory fish that died with its prey still in its mouth. Opening hours are from Easter to October, daily from 1:30 to 5 pm and Sunday additionally from 10 am to noon. Admission is €2.

Fossil hunting is possible at the Museum Bergér while the museum shop also sells prepared fossils.