The Altmühl Valley in Bavaria, Germany has beautiful nature and easy access for cyclists, bikers, hikers, rock climbers, and canoeists. 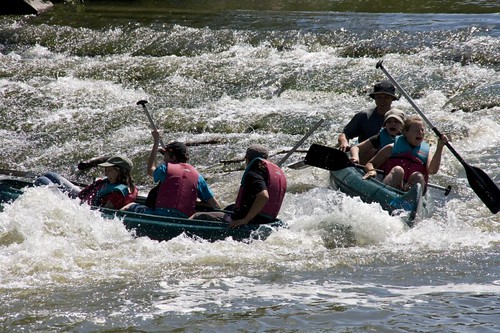 Countryside Hikes in the Altmühltal Valley

The Altmühl Park has around 3,000 km/1,900 miles of marked hiking routes. The most famous is the 200-km/125-mile Altmühltal-Panoramaweg (Altmühl Valley Panorama Route), which closely follows the flow of the river from Gunzenhausen to Kelheim. It goes through both the valley and surrounding hills but without challenging inclines. The route is particularly busy in spring and autumn. Things are much quieter on the numerous routes that go up many side valleys.

The Limesweg follows the route of the original Roman defense wall that ran from Rheinbrohl on the Rhine to Kelheim on the Danube. It goes through the Altmühl Park from Gunzenhausen to Kelheim on a direct 110-km/70-miles route.

Rock Climbing in the Altmühltal Valley

Rock climbing has been popular for well over a century in the Altmühl Valley. The straight-faced limestone rocks allow climbs ranging in difficulty from level III to X. Most climbable rocks are in the Eichstätt region with the 50-m/160-ft Dohlenfelsen the highest and most challenging with 60 possible routes.

The Kletterhalle Eichstätt, Brauerei Hofmühl, Hofmühlstraße 10, Eichstätt, tel 08421-8657, has an indoor climbing wall. It is open from October to mid-April on Monday, Wednesday, and Friday from 6 to 10:30 pm. Admission is €7.

Cycling in the Altmühltal Valley

Most of the region is part of the Altmühltal nature park with strict environmental protection regulations. Cycling is not allowed on paths less than 1.5 m/5 ft wide unless specifically permitted by signposting.

Several cycling routes pass through the area but the 160-km/100-mile Altmühltal route is by far the most popular. This relatively flat route between Gunzhausen and Kelheim is usually divided into two or three day stages. The best scenery is between Treuchtlingen and Riedenburg. Towns between Gunzenhausen and Eichstätt have frequent rail connections, but note that there are no railway links on the second half of the route after Eichstätt. Saal an der Donau, 6 km/4 miles from Kelheim, has rail connections to Ingolstadt and Regensburg.

During summer, two bus lines with a bicycle transport service operate three times daily on weekends and vacation days on part of the Altmühltal route. Freizeitbus 1, tel 0941-600-0122, connects Regensburg and Riedenburg via Kelheim from mid-April to early October. Freizeitbus 2, tel 08458-32-490, connects Eichstätt and Riedenburg from May to October. On weekdays, a late afternoon service is also available between Eichstätt and Beilngries. Reservations are recommended for bicycles but generally not necessary for hikers.

The region has several shorter but much more challenging routes. A third of the 31-km/20-miles route from Eichstätt to Ingolstadt is uphill. The first fifth of the 40-km/25-mile Anlauertal route between Weißenburg and Kinding is a very steep incline but then downhill all the way. Neither of these routes are suitable for children.

Bicycle rentals are available in most towns in the region, including:

Canoeing in the Altmühltal Valley

The slow-flowing Altmühl River is a canoeing paradise with lovely scenery and interesting small towns. From the Altmühl Lake at Gunzenhausen to where the river flows into the Main-Danube Canal at Dietfurt is 120 km/74 river miles.

The most popular natural sight in the Altmühl Valley is the Twelve Apostles rock formation downstream from Solnhofen but most of the river downstream from Treucthlingen to Riedenburg is scenic. The just less than 48 km/30 miles upstream from Eichstätt has around ten weirs where boats need to be carried, while the 48 km/30 miles downstream to Beilngries have only two.

Popular half-day trips of just over 11 km/7 miles each include Treucthlingen to Solnhofen and Solnhofen to Dollnstein, while full-day 24-km/15-mile trips include Mörnsheim to Eichstätt or Eichstätt to Kipfenberg.

The 35 km/22 miles from Dietfurt to Kelheim are on the Main-Danube Canal and require more experience as the water is very still and commercial boats ply the route. On this section, the minimum age is 14 years, and additional safety equipment compulsory. Although the scenery up to Riedenberg is at times dramatic, this part is best done on a riverboat, by bicycle, or on foot.

Boat rentals are available from:

It is allowed to pitch tents (€3 per person) only at designated areas. Locals are quick to report illegal camping to the police.

Cycling, Kayaking, and Hiking Combination Tours in the Altmühltal Valley

Several companies combine cycling, kayaking, and hiking tours in the Altmühl Valley ranging from less than a day to over a week. Delivery and collection of rental equipment are taken care of and overnight accommodation can be arranged at very reasonable prices.

The largest operator in the region with stations in several towns along the Altmühl as well as in the lake district is SAN-Aktiv-Tours, Zentrale Gunzenhausen, Bühringerstraße 11, 91710 Gunzenhausen, tel 09831-4936, fax 09831-80-594. In addition to tours, it also offers simple bicycle and kayak rentals with the option to return equipment at any of their rental stations.