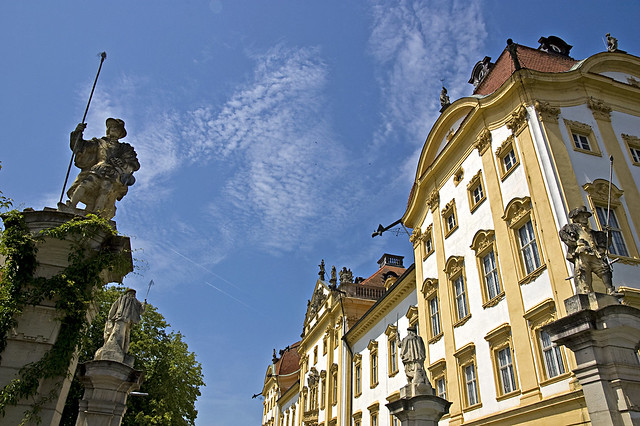 Weißenburg with its Roman sites and Fortress Wülzburg, Ellingen with the Teotonic Order Palace and Baroque old town, and Charlemange’s Main-Danube Canal are interesting sites to see.

Weißenburg is famous for its Römermuseum (Roman Museum) with a huge and important Roman treasure. Two further Roman sights are around a 10-minute hike from Weißenburg old town to the west of the railway line. In 1990, the north gate of the former Römerkastell Biriciana (Roman Fort) was reconstructed on the foundations of the original. Further reconstructions are planned. The site is open freely.

Nearby, in 1977, the foundations of the Römische Thermen (Roman Thermal Baths), Am Römerbad, were discovered by chance. The baths were among the largest and most important in southern Germany. Opening hours are daily from Palm Sunday (or latest April 1) to November 1 from 10 to 12:30 pm and 2 to 5 pm. Admission is €1.50.

To the east of Weißenburg, Festung Wülzburg (Fortress) looks down on the town. According to legend, a monastery was founded here by King Pippin (714-768) and Charlemagne is said to have stayed here several times. During the 11th century, a Benedictine monastery was built here and it eventually fell into the hands of the margraves of Brandenburg-Ansbach. They erected a huge, five-pointed star-shaped citadel, which is one of the best examples of Renaissance fortress architecture in Germany.

During the First World War, Charles de Gaulle was imprisoned in Festung Wülzburg. (Due to his frequent escape attempts he was also imprisoned in Ingolstadt and Kronach.) The fortress now houses a school and the exterior is accessible year round. The interior can only be seen on guided tours from Easter to October on Saturday between 1 and 5 pm and Sunday from 11 to 5 pm. Admission is €2.

Although only 3 km/2 miles from Weißenburg, Ellingen has a completely different history. From 1216 to 1809, Ellingen’s destiny was determined by the presence of the Teutonic Order, which erected most of the sights worth seeing.

Ellingen is dominated by the huge Late Baroque Teutonic Order Palace or Residenz (Residence), tel 09141-974-790, for long the seat of the commander of the important Franken region. This four-winged palace with a central courtyard is partly Renaissance on Gothic foundations but the dominating style is Baroque. The twin-flight ceremonial staircase is worth seeing, as is the church that forms the north wing of the complex. Opening hours with compulsory tours each full hour are Tuesday to Sunday, April to September from 9 am to 5 pm and October to March from 10 am to 3 pm. Admission is €4.

The old town shows a rare conformity of style making Ellingen one of the loveliest Baroque towns in Bavaria. Around 150 buildings have protection orders. The most interesting are the mid-18th-century Rathaus and the Pleinfelder Tor (Gate) from 1660.

In 793, Charlemagne initiated a project to link the Danube and Main by canal. The project ended unsuccessful within months due to heavy flooding and the need to finance more pressing military campaigns.

Around 10 km/6 miles south of Weißenburg, near Treuchtlingen, the original stretch can still be seen. It is known as the Karlsgraben or Fossa Carolina and around 500 m/1,600 ft long, 30 m/100 ft wide, and 10 m/33 ft deep. Paths lead around the weir and information panels explain the history and details of the project.

The Ludwigskanal (1836-45) finally linked the Main and Danube but the canal was not really suitable for commercial traffic. It was only in 1992 that the two rivers were truly linked through the Main-Danube Canal connecting Kelheim and Bamberg via Nürnberg.

A German minister of transportation once described the canal as the dumbest building project since the tower of Babel. He had reason – a decade after its completion, freight charges contributed only 10% of annual running costs.