Weißenburg was a Roman garrison town and a free imperial city before becoming part of Bavaria. Major sights to see include the old town and Roman treasure and sites. 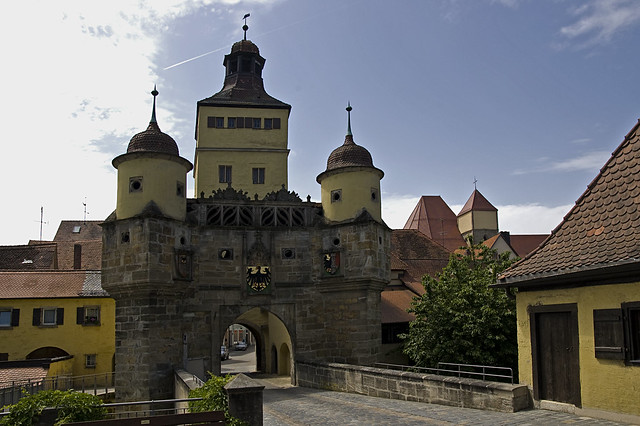 In AD 89, the Romans forced the local Celtic population out of the Weißenburg area and founded a garrison town. Around two centuries later, Aleman tribes forced the Romans back across the Danube and the town was forgotten until a royal court was erected in Merovingian times. By the end of the 13th century, Weißenburg became a free imperial city, a status it maintained, although it had to buy itself free twice, until it became part of Bavaria in 1806.

The town of 18,000 has an attractive old town with well-preserved town defenses but the main attraction is the Roman heritage.

Most of Weißenburg’s town wall (13th and 14th century) survived with wooden sentries’ walks and no less than 38 watchtowers. The most impressive is the Ellinger Tor (gate) to the north of the old town. It is mostly 14th century but with some later additions and considered one of the best examples of its kind in Franken.

The large Marktplatz (Market Square) in Weißenburg was divided by the construction of the huge, Late Gothic Rathaus (Town Hall) in 1476. (The tower was added a century later.)

To the northwest of the old town is St Andreas, Pfarrgasse 5, tel 09141-97-460, a Gothic Lutheran church. The main church was completed in 1327, the choir was added by 1465, and the tower, which robs light from the main window, finished in 1520. Inside, note the 15th-century high and Sebald altars. The treasury in the former sacristy includes a 12th-century Romanesque procession cross. The church is open daily May to September from 8 am to 6 pm, and October to April from 8 am to 5 pm.

The Reichsstadtmuseum Weißenburg (Free Imperial City Museum), Martin-Luther-Platz, tel 09141-907-124, explains the history and life during the five centuries that Weißenburg was a free imperial city. The exhibition is thematic and includes art, furniture, and other historic objects. Opening hours are daily from March to December from 10 to 12:30 pm and 2 to 5 pm. Admission is €1.50.

In 1979, a gardener was working on an asparagus bed when he discovered a Roman treasure of around 150 items including 16 statues of gods, bronze vessels, and household items. This treasure, one of the most important archeological finds in Germany, forms the core of the Römermuseum (Roman Museum), Martin-Luther-Platz 3-5, tel 09141-907-124, with items from the pre-Roman to early Carolingian periods. Opening hours are daily from March to December from 10 to 12:30 pm and 2 to 5 pm. Admission is €2.

A combination ticket, valid for one month, is available at €4 for the Römermuseum, Reichstadtmuseum, and Römische Thermen. If Burg Pappenheim and the Bürgermeister-Müller-Museum in Solnhofen are added, the ticket is €7.50.