The 17th-century Portugese Synagoge is a working synagogue but open to visitors as a central part of the Jewish Cultural Quarter in Amsterdam. 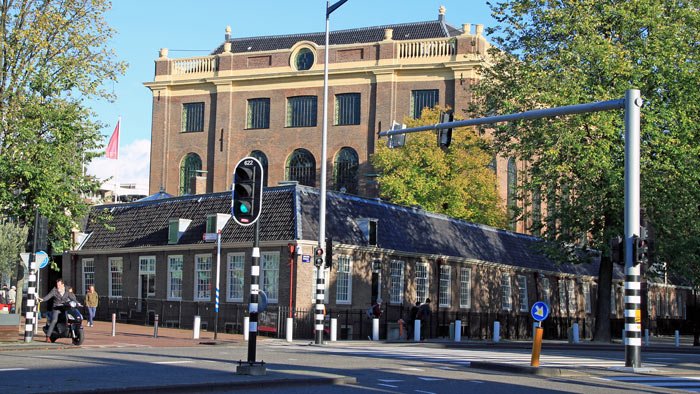 The Portuguese Synagogue or Esnoga in Amsterdam is one of the oldest and largest working synagogues in Europe. It is at the heart of the Jewish Cultural Quarter in Amsterdam. The building dates from the 17th-century and has a mostly original interior, which is still lit only by candlelight. A super audio guide explains the synagogue and various attached buildings to visitors of all faiths.

The Portuguese Synagogue in Amsterdam 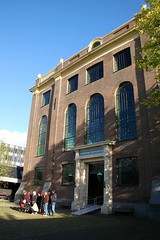 The Portugese Synagoge, or Esnoga, is named after the Portuguese Jews who fled from Roman Catholic persecution in Portugal to Amsterdam during the sixteenth century. On completion in 1675, the Esnoga was the largest synagogue in Europe. Today, it is with the synagogue in Prague, the oldest synagogues still in use in the Europe.

At the start of the Second World War, around 140,000 Jews lived in The Netherlands, of which only around 20,000 survived the war. The Portuguese Synagogue escaped the war mostly intact, as it was already a listed national monument. Its huge windows also spared it from being used as an internment center.

Visiting the Portuguese Synagogue in Amsterdam 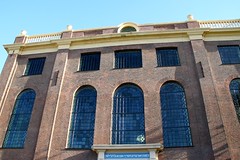 The Portuguese Synagogue is a huge building at the heart of the Jewish Cultural Quarter to the east of central Amsterdam. Admission tickets include an audio guide that explains various aspects of the building, Jewish religious ceremonies, history, and culture in sufficient detail to make a visit both educational and enjoyable to visitors of all faiths.

The huge synagogue was dedicated in 1675. The Hebrew sign above the door says 1672, the year in which it was due for completion. However, construction was delayed, as 1672 is known in Dutch history as Het Rampjaar (the disaster year). 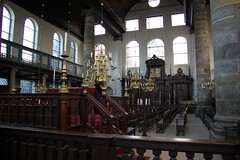 The layout and much of the interior, including the copper candelabras, are mostly original. The main hall has no electric lightening and is still lit at night by around a thousand candles. Note the sand on the wooden floor – a Dutch tradition to clean shoes and keep noise down.

The audio guide explains the various parts of the building as well as Jewish religious ceremonies. As the synagogue is still in use, male visitors are requested to wear a kipa (skull cap head cover available at the ticket office) while inside the building. 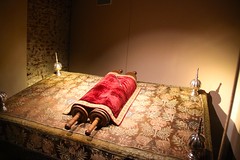 Visitors may also explore the other buildings in the complex – green signs indicate which parts are open on any given day or time. The most interesting is the treasury in the basement with a large collection of tora and other Jewish religious ritual objects. Visitors may also see the mikwe (traditional bath), the winter synagogue and meeting rooms, enter the women’s galleries from the rear of the building, and see the rooms used for funerals.

Tickets and Opening Hours of the Portuguese Synagogue 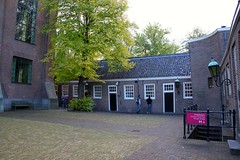 Tickets for the Jewish Cultural Quarter (Joods Cultureel Kwartier) in Amsterdam are €15 for adults, €7.50 for children 13 to 17 and students, and €3.75 for children 6 to 12. Online mobile phone tickets are available from Tiqets or the museum. The Museumkaart and I Amsterdam City Card give free admission.

Opening hours for the Portugese Synagoge are shorter than for the other Jewish sites as the synagogue is still functioning in its original religious capacity. 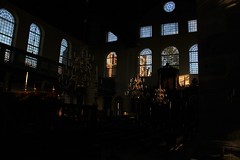 The Jewish Cultural Quarter has a central location just to the east of the center of Amsterdam. It is easily reached from Centraal Station on tram 9 or from the Anne Frank House on tram 14. It is also a pleasant walk from many parts of Amsterdam.

Other Sights Near the Portuguese Synagogue

From the Portugese Synagoge and the Jewish Museum, it is only a few minutes walk to the Schouwburg, the Artis Zoo and the Verzetsmuseum (Resistance Museum) while Het Scheepvaartmuseum (Maritime Museum) is only around a kilometer away.

The brochure Persecution and resistance in Amsterdam (with map) describes a walking route between the Anne Frank House and the Resistance Museum via the Jewish Cultural Quarter and other related Second World War memorial sights.