Das Panorama is a special temporary exhibition in Berlin showing some of the sculptures and frieze reliefs of the Pergamon Altar while the Hellenic section of the Pergamon Museum remains closed for renovation. Around 80 statues from antiquity is on display while the Panorama refers to a huge 360° painting by Yadegar Asisi of a day in the life of the Greek metropolis Pergamon. The temporary exhibition will be in place until 2024 – the Pergamon Altar Hall in the main museum should reopen shortly afterwards. 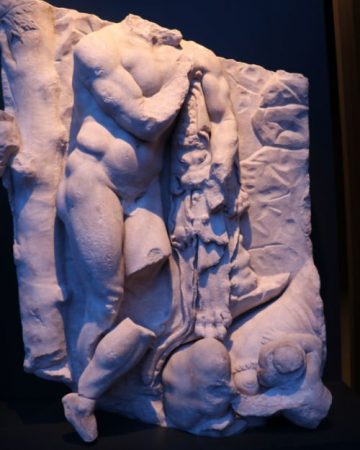 The Pergamon Altar from Greek antiquity is among the best-known works in the vast collection of the Berlin State Museums. It was original constructed around 180 and 160 BC in the Greek city Pergamon and was considered by the Romans to be among the highest artistic achievements of ancient Greece.

A large section of the Pergamon Altar was reconstructed in the Pergamon Museum in Berlin to show off the friezes and many statues in their original position. These were excavated in Turkey towards the end of the 19th century,

Parts of two friezes from the Pergamon Altar are exhibited in Berlin: 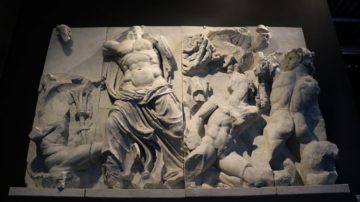 The Pergamonmuseum is currently undergoing a major renovation. As a result, the Pergamon Altar cannot be seen and will only again be fully accessible to visitors by 2025.

In the meantime, many of the statues may be seen in the special Panorama exhibition. It comprises of two main sections:

At the core of the temporary Pergamonmuseum exhibition is a 3,100 sq m circular representation of the Greco-Roman city Pergamon. This huge 360° painting by Yadegar Asisi shows the city in AD 129 on the festival of Dionysus when the Pergamon Altar would have played a central role. The original painting was enlarged and reproduced on material measuring 30 by 104 m.

A light and sound show allow visitors to see Pergamon through a day cycle. A five-story central tower with platforms allows for a better bird’s eye view of the city. An elevator is available if necessary.

The painting succeeds in placing the Pergamon Altar in context with other monumental structures such as the theater, temple of Dionysus, sanctuary of Athena and the Trajaneum. The Pergamon Altar was not a temple – it was a place for the slaughter of animals and offering by burning to the gods on the sacrificial altar.

The painting also show the friezes in color, as the originally would have been. Plaster casts show part of the surviving frieze with a large drawing showing what the completed relief probably looked like.

Statues from Antiquity in the Pergamon Das Panorama Exhibition 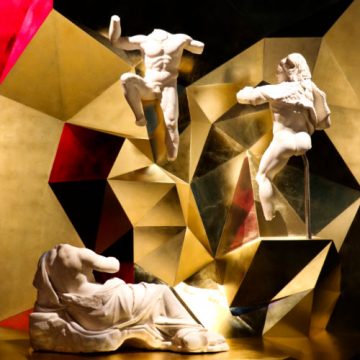 Impressive as the Asisi painting is, the main reason the visit Pergamonmuseum: Das Panorama exhibition is still to see the magnificent Greek sculptures. Around 80 items are on display – mostly arranged according to geographical origin.

An impressive group of women statues was placed on the terrace of the Pergamon Altar. Changing lights allow visitors to see these draped statues to best effect in different light conditions. 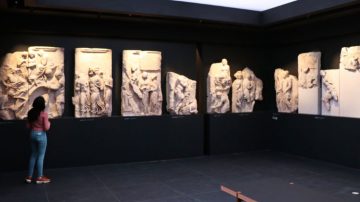 The most-impressive grouping is the 47 surviving marble slabs from the smaller frieze from the Pergamon Altar. It tells the story of Telephos, son of Heracles, and the foundation of Pergamon to prove the divine ancestry of the kings of Pergamon and thus their legitimate claim to power. The oracle of Delphi, Auge, priestess of Athena, Heracles, Telephus, lions, nymphs, Troy, Achilles – they are all in there somewhere.

The Great Frieze, a high point of Greek relief art, had to remain inside the museum for conservation purposes but plaster casts and a multimedia show give a good impression what awaits once the museum reopens.

History of the Pergamon Altar in Berlin 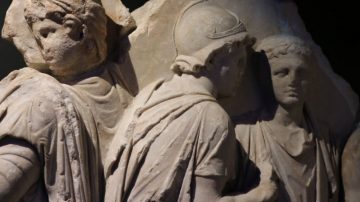 The Greek city Pergamon was situated in Asia Minor – in the northwest of present-day Turkey. It was at its peak during the second century BC when amongst others the Pergamon Altar was constructed. The city lost political importance after it was handed over to the Romans in 133 BC but it remained a cultural center with a very important library. The city is mentioned in the Book of Revelations in the Christian bible. 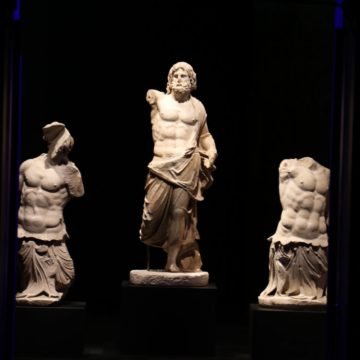 The Pergamon Altar was excavated by the Museums of Berlin between 1878 and 1886. The altar itself was already dismantled in the late 7th century AD with some of the relief slabs used to build defensive walls. The two friezes were transported to Berlin during the 19th century under agreements on the division of finds – in Turkey most Pergamon finds are in the Istanbul Archaeological and Bergama museums.

During the Second World War, the friezes were dismantled and stored in a bunker. Following the war, they detoured through the Soviet Union but returned to Berlin’s Museum Island in 1958.

The restored friezes were returned to the Altar Hall in the Hellenic section of the Pergamon Museum in 2004. Due to structural renovations of the museum, the Altar Hall will only again be fully accessible to the public by 2025. 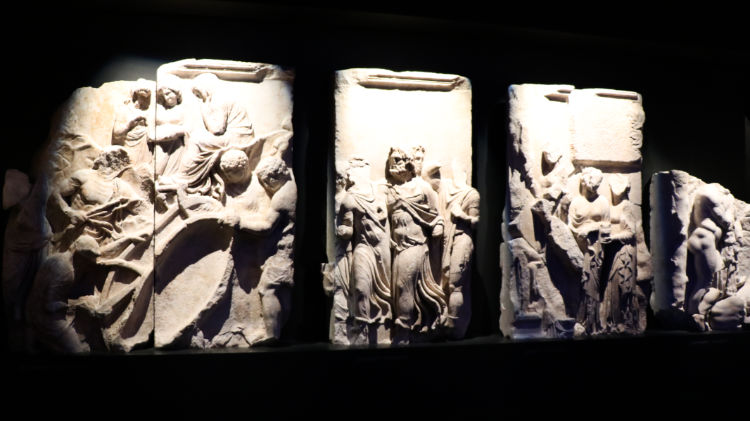 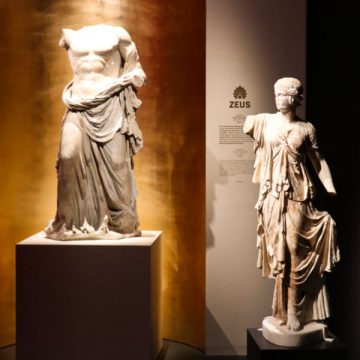 Tickets for the temporary Pergamonmuseum Das Panorama exhibition are in addition to normal museum tickets. A combination ticket for the main Pergamon Museum and Das Panorama is €19. Bearers of other museum passes such as the Museum Island Day Ticket and the Museum Pass Berlin need to buy an add-on ticket (Zusatzticket) for €6.

Admission is free for children under 18.

Time-slot reservations are free online and sensibly should be done for both the Pergamon Museum and Das Panorama.

The opening hours of the Panorama exhibition are the same as for the main Pergamon Museum: daily from 10:00 to 18:00, closing at 20:00 on Thursdays. 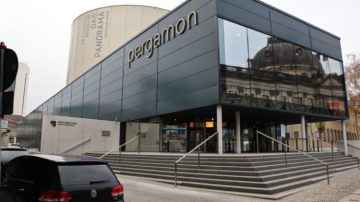 The temporary Pergamonmuseum. Das Panorama exhibition is at Am Kupfergraben 2. This location is near the original Pergamon Museum entrance but off Museum Island to the north of the railway line very close to the entrance of the Bode Museum.

The closest public transportation stop is Am Kupfergraben on trams M1 and 12 but many may find it simpler to walk from Friedrichstraße station (U and S-Bahn trains) or from Unter den Linden bus stops Lustgarten (bus 100 or 200) or Staatsoper (bus TXL).

Due to ongoing construction in the area, walking paths change but signposting is very clear. The entrance to both the Pergamon Museum and the Neues Museum are now via the modern Simon James Gallery building. (Visitors with timeslot reservations may skip the queue and go straight into the exhibition areas.)

Note: Most Berlin museums and similar sights are open in 2022 and 2023. Timeslot reservations are essential for only the Alte Nationalgalerie, Gemäldegalerie, Neue Nationalgalerie, Neues Museum, Pergamon Museum and Das Panorama. Timeslots are released only around four weeks in advance. Tickets are available from GetYourGuide that seem to have timeslots available when SMB has already sold out — many passes or multi-museum tickets are again available. Individual museum ticket prices range from €6 to €14 (€20 for special exhibitions). Online tickets are skip-the-line — go directly to the gallery entrance to scan the code.

For more general information on the Berlin State Museums: